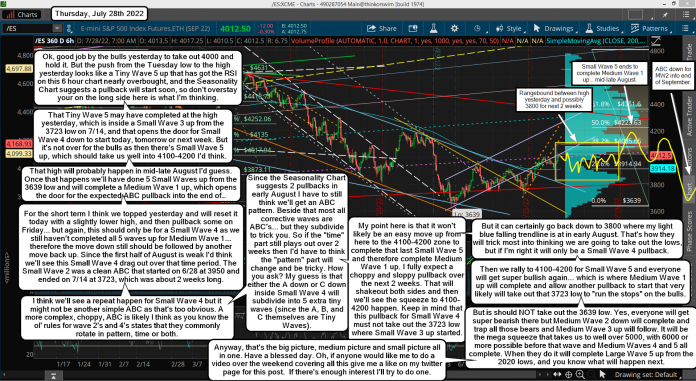 Ok, good job by the bulls yesterday to take out 4000 and hold it. But the push from the Tuesday low to the high yesterday looks like a Tiny Wave 5 up that has got the RSI on this 6 hour chart nearly overbought, and the Seasonality Chart suggests a pullback will start soon, so don't overstay your on the long side here is what I'm thinking.

That Tiny Wave 5 may have completed at the high yesterday, which is inside a Small Wave 3 up from the 3723 low on 7/14, and that opens the door for Small Wave 4 down to start today, tomorrow or next week. But it's not over for the bulls as then there's Small Wave 5 up, which should take us well into 4100-4200 I'd think.

That high will probably happen in mid-late August I'd guess. Once that happens we'll have done 5 Small Waves up from the 3639 low and will complete a Medium Wave 1 up, which opens the door for the expected ABC pullback into the end of September for the Medium Wave 2 down... and that's the one that should get back to 3700-3800 to lure in bears looking for the 3639 low to break. Everything is lining up nicely right now with the Seasonality Chart and the wave count is right in sync with it as well.

For the short term I think we topped yesterday and will reset it today with a slightly lower high, and then pullback some on Friday... but again, this should only be for a Small Wave 4 as we still haven't completed all 5 waves up for Medium Wave 1... therefore the move down still should be followed by another move back up. Since the first half of August is weak I'd think we'll see this Small Wave 4 drag out over that time period. The Small Wave 2 was a clean ABC that started on 6/28 at 3950 and ended on 7/14 at 3723, which was about 2 weeks long.

I think we'll see a repeat happen for Small Wave 4 but it might not be another simple ABC as that's too obvious. A more complex, choppy, ABC is likely I think as you know the ol' rules for wave 2's and 4's states that they commonly rotate in pattern, time or both.

Since the Seasonality Chart suggests 2 pullbacks in early August I have to still think we'll get an ABC pattern. Beside that most all corrective waves are ABC's... but they subdivide to trick you. So if the "time" part still plays out over 2 weeks then I'd have to think the "pattern" part will change and be tricky. How you ask? My guess is that either the A down or C down inside Small Wave 4 will subdivide into 5 extra tiny waves (since the A, B, and C themselves are Tiny Waves).

My point here is that it won't likely be an easy move up from here to the 4100-4200 zone to complete that last Small Wave 5 and therefore complete Medium Wave 1 up. I fully expect a choppy and sloppy pullback over the next 2 weeks. That will shakeout both sides and then we'll see the squeeze to 4100-4200 happen. Keep in mind that this pullback for Small Wave 4 must not take out the 3723 low where Small Wave 3 up started.

But it can certainly go back down to 3800 where my light blue falling trendline is at in early August. That's how they will trick most into thinking we are going to take out the lows, but if I'm right it will only be a Small Wave 4 pullback.

Then we rally to 4100-4200 for Small Wave 5 and everyone will get super bullish again... which is where Medium Wave 1 up will complete and allow another pullback to start that very likely will take out that 3723 low to "run the stops" on the bulls.

But is should NOT take out the 3639 low. Yes, everyone will get super bearish there but Medium Wave 2 down will complete and trap all those bears and Medium Wave 3 up will follow. It will be the mega squeeze that takes us to well over 5000, with 6000 or more possible before that wave and Medium Waves 4 and 5 all complete. When they do it will complete Large Wave 5 up from the 2020 lows, and you know what will happen next.

Anyway, that's the big picture, medium picture and small picture all in one. Have a blessed day. Oh, if anyone would like me to do a video over the weekend covering all this give me a like on my twitter page for this post.  If there's enough interest I'll try to do one.