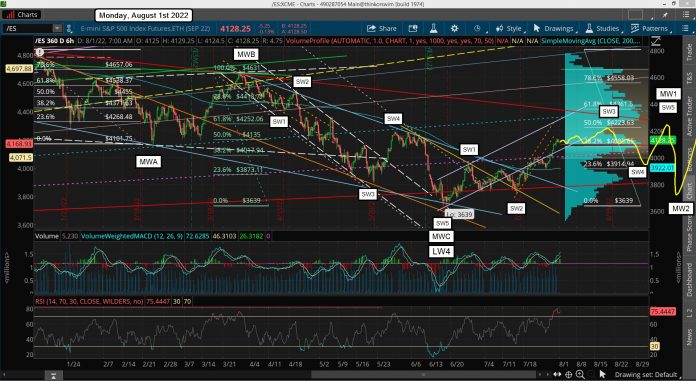 Last Friday didn't disappoint as it was another good up day for the bulls. The best that I can make out we are still in a Small Wave 3 up from the 3723 low on 7/14, inside a Medium Wave 1 up from the 3639 low. This suggest we'll have a Small Wave 4 pullback at some point, then a Small Wave 5 up to finish the series, and it's looking like it might drag out into September, but that's not clear.

Here's the issue you see... we have a Seasonality high for mid-late August and another for early-mid September. One of those highs will end Medium Wave 1 up, but I don't know which one.

For example, we know the falling red trendline from the all time high down to the 4631 rally high on 3/29 is the major resistance overhead. I, like most traders, see it and believe that's a huge stopping point for the bulls. And if it gets hit most will short it, which I can't blame them.

The question is "when"? If we hit it in mid-late August and I can see a clean 5 Wave move up from the 3639 low, with clean Wave 2's and 4's that have ABC's in them, as well as the proper pullback's in percentage on them, then I'll then look for Medium Wave 2 down to start. It should be an ABC of course and should bottom in late September or early October.

The Small A Wave down inside it should happen into late August and then the Small B Wave up should top in early-mid September. Normally "B Waves" make lower highs then the starting point of the A Wave down, so that suggests it will not take out the August high.

But that's only "normally", and over the past few decades that rule has be changed to allow for a "throw over" to happen... meaning it goes slightly higher then the top of the A (which is the end of Medium Wave 1 up). I suspect this rule for ElliottWave was adapted after the futures market was opened in 1997, as prior to that you didn't have such things as "stop runs" on traders that are trapped short or long. So it was a cleaner market prior to 1997 and B Waves just did typical 50%, 61.8%, 78.6%, etc... retraces back up.

Now, with the invention of the futures market, traders can get forced to buy back their shorts at higher prices to avoid a margin call. This buying is not natural and can cause these "over shoots" to happen where you see a fast squeeze to take out some A Wave high instead of stopping below it like it should.

Does that mean it's going to happened this time around you ask?  Well, I'm not expecting it, but anything is possible. My primary reason for thinking that is because we are still in the light volume summer months where it's mostly retail traders and not the big boys. So any squeezes are going to happen on the retail guys, and they isn't likely going to be enough stops to run to produce that powerful of a squeeze... in my opinion of course.

So I'll go with the September rally high to be a lower one then the August high... "if" (again) we get a clear 5 Wave series up to end Medium Wave 1 in mid-late August.

What would that look like you ask? Well, it should require a pretty decent pullback this week for the Small Wave 4 down, like to say 3900 or so. Then another very strong rally up to hit the fall red trendline into the 3rd week of August, which would be around 4320 by then.  That would then form a nice and clean looking 5 Wave rally up from the 3639 low and I'd put high odds that Medium Wave 1 completed.

Ok, what would it look like if we don't do that and instead hit the red trendline in September you ask?

Good question. Hard too say for sure but I'd speculate that it would look like this... the Small Wave 3 up ends in mid-late August around the 50% mark, (that means it's going to subdivide and take longer to finish). That level is 4223.63, (this is from the 3639 low), then we get a Small Wave 4 pullback to say 3900-4000 into late August. Then a Small Wave 5 up into early-mid September to reach the falling red trendline... which will be around 4300 by then I'd estimate.

Of course after that completes there shouldn't be many bears left as they all got squeezed out, and that's the perfect end for Medium Wave 1 up in my opinion. It's setups a mid-late drop in September to take out the bulls and once again suck in some more bears looking for the 3639 low to be taken out.

Over the weekend I looked around the internet for others to see what they are thinking and everyone I saw is looking for a lower low in September, October and some say November... so everyone seems to be looking for a much lower low this fall it seems.  I appear to be by myself on this Wave count as I still think the low is "in" and we will ONLY make a higher low in late September. Then I believe we'll start a HUGE rally to 5000+ by the end of the year and crash in 2023.  Maybe I'm wrong, maybe I'm right... only time will tell.

As for the short term... the 6 hour chart is quite overbought but the daily still has room to go higher.  So we might be in a similar technical pattern as the 3/14 to 3/29 period where we saw the market stay overbought as it grinded up higher during that 2 week period.  That was a strong rally and I believe it was C Wave inside a bigger B Wave from the 2/24 low.  It subdivided of course like most C Waves do as they are like Wave 3's, so if we are going to do a similar move I'd only expect a small pullback this week for some Tiny Wave 4 inside Small Wave 3 up.

The "when" part is the question I don't know, but I'm leaning toward a September high to end it as I just don't see it likely to get both the Small Wave 4 down and Small Wave 5 up finished in the next 3 weeks.  More time is needed I think.  This week shouldn't lose the 4040-4050 for the Tiny Wave 4, and last support for it would be around 3980-4000.

Any more then that and I'll have to conclude that it's not a Tiny Wave 4 pullback but instead it's the Small Wave 4 coming early and unexpected... which could certainly screw up the Seasonality Chart.  We'll cross that road if it happens, but for now it's still tracking quite well.