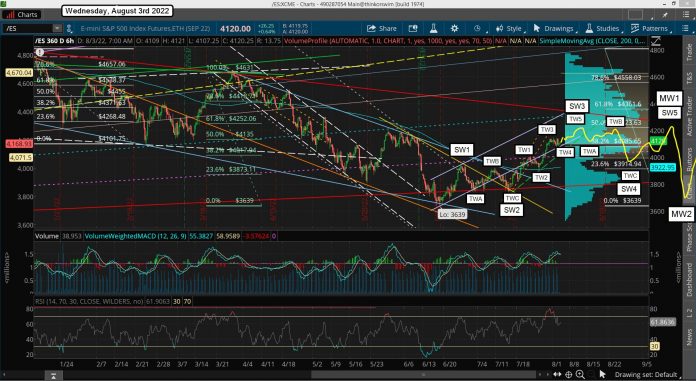 More chop yesterday and today doesn't look any different, but at some point we should see a breakout higher. Whether that is today or tomorrow or Friday I just don't know. But you can see the lower purple trendline in the rising channel that is acting as support right now, so if the market plans on holding it a breakout this week is likely.

There's also support from the dashed rising green trendline, so the market could continue this rangebound chop for several more days until it reaches that trendline to use as a launching pad for the next move higher. As far as wave count I still think we are in the Small Wave 3 up and that's it's subdividing into Tiny Waves.

I'm not positive but this sideway action could be a Tiny 4, so even though we will likely go up higher soon it should end Small Wave 3 up and then a better pullback will follow for Small Wave 4 down.

That will be a tough one to figure out but I think we could see an ABC move down for that Small Wave 4 into the middle of August with the 3900's possible. For example, lets say we breakout by this Friday and hit the 50% mark at 4223.63 for Tiny Wave 5 up, which would end Small Wave 3 up, then we could start the Small Wave 4 down late next week. Again, it will likely be in an ABC pattern with the C wave subdividing into 5 waves, and possibly the A wave doing the same.

From the Seasonality point of view mid-August is bullish and it doesn't get bearish until the last week of the month. So if we hit the 4200's this week or early next week my guess is that the Tiny A Wave down inside the Small Wave 4 will a shallow pullback because we will be in the mid-August bullish period.

Then the Tiny B Wave back up will be drawn out for a week or so with many attempts to "hold the line" around the 4200's, which keeps everyone long of course looking to exit when the falling red trendline gets hit up closer to 4300 or so. Finally, late in the month we rollover for Tiny Wave C inside Small Wave 4, which could go as deep as the low 3900's I think. Of course everyone will get bearish there looking for a complete breakdown to a new lower low, but it should not happen.

From that low at the end of August the market should turn back up for the Small Wave 5 inside Medium Wave 3, and it should of course subdivide into 5 Tiny Waves to confuse both sides. But if all goes as planned it will top mid-late September with the falling red trendline as target, so 4300 or so basically. It's at that point where Medium Wave 2 down should start, which should fall into the 3700-3800 zone by the end of the month.

All of this is just my "best guess" based on all the data I have and is of course NOT written in stone. But it's a good overall picture of the timeline I think and is what I'm thinking will happen. Have a blessed day.