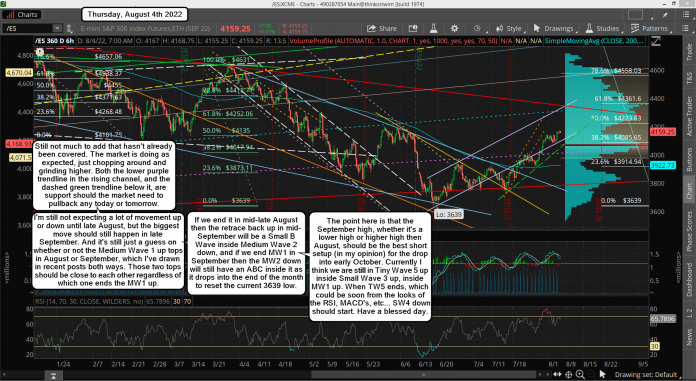 Still not much to add that hasn't already been covered. The market is doing as expected, just chopping around and grinding higher. Both the lower purple trendline in the rising channel, and the dashed green trendline below it, are support should the market need to pullback any today or tomorrow.

I'm still not expecting a lot of movement up or down until late August, but the biggest move should still happen in late September. And it's still just a guess on whether or not the Medium Wave 1 up tops in August or September, which I've drawn in recent posts both ways. Those two tops should be close to each other regardless of which one ends the MW1 up.

If we end it in mid-late August then the retrace back up in mid-September will be a Small B Wave inside Medium Wave 2 down, and if we end MW1 in September then the MW2 down will still have an ABC inside it as it drops into the end of the month to reset the current 3639 low.

The point here is that the September high, whether it's a lower high or higher high then August, should be the best short setup (in my opinion) for the drop into early October. Currently I think we are still in Tiny Wave 5 up inside Small Wave 3 up, inside MW1 up. When TW5 ends, which could be soon from the looks of the RSI, MACD's, etc... SW4 down should start. Have a blessed day.