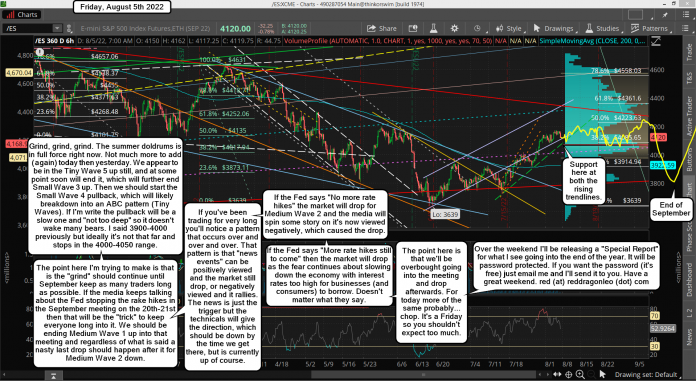 Grind, grind, grind. The summer doldrums is in full force right now. Not much more to add (again) today then yesterday. We appear to be in the Tiny Wave 5 up still, and at some point soon will end it, which will further end Small Wave 3 up. Then we should start the Small Wave 4 pullback, which will likely breakdown into an ABC pattern (Tiny Waves). If I'm write the pullback will be a slow one and "not too deep" so it doesn't wake many bears. I said 3900-4000 previously but ideally it's not that far and stops in the 4000-4050 range.

The point here I'm trying to make is that is the "grind" should continue until September keep as many traders long as possible. If the media keeps talking about the Fed stopping the rake hikes in the September meeting on the 20th-21st then that will be the "trick" to keep everyone long into it. We should be ending Medium Wave 1 up into that meeting and regardless of what is said a nasty last drop should happen after it for Medium Wave 2 down.

If you've been trading for very long you'll notice a pattern that occurs over and over and over. That pattern is that "news events" can be positively viewed and the market still drop, or negatively viewed and it rallies. The news is just the trigger but the technicals will give the direction, which should be down by the time we get there, but is currently up of course.

If the Fed says "No more rate hikes" the market will drop for Medium Wave 2 and the media will spin some story on it's now viewed negatively, which caused the drop.

If the Fed says "More rate hikes still to come" then the market will drop as the fear continues about slowing down the economy with interest rates too high for businesses (and consumers) to borrow. Doesn't matter what they say.

The point here is that we'll be overbought going into the meeting and drop afterwards. For today more of the same probably... chop. It's a Friday so you shouldn't expect too much.

Over the weekend I'll be releasing a "Special Report" for what I see going into the end of the year. It will be password protected. If you want the password (it's free) just email me and I'll send it to you. Have a great weekend. red (at) reddragonleo (dot) com