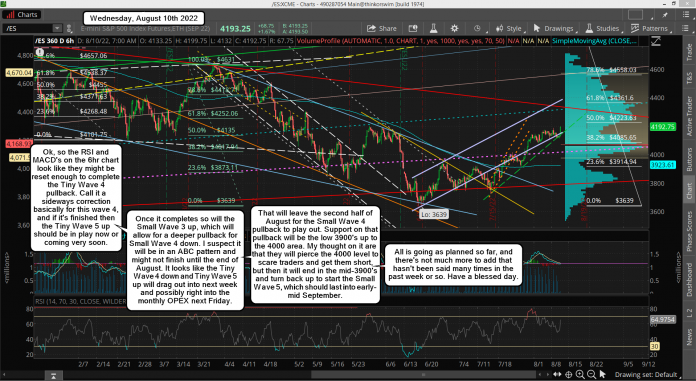 Ok, so the RSI and MACD's on the 6hr chart look like they might be reset enough to complete the Tiny Wave 4 pullback. Call it a sideways correction basically for this wave 4, and if it's finished then the Tiny Wave 5 up should be in play now or coming very soon.

Once it completes so will the Small Wave 3 up, which will allow for a deeper pullback for Small Wave 4 down. I suspect it will be in an ABC pattern and might not finish until the end of August. It looks like the Tiny Wave 4 down and Tiny Wave 5 up will drag out into next week and possibly right into the monthly OPEX next Friday.

That will leave the second half of August for the Small Wave 4 pullback to play out. Support on that pullback will be the low 3900's up to the 4000 area. My thought on it are that they will pierce the 4000 level to scare traders and get them short, but then it will end in the mid-3900's and turn back up to start the Small Wave 5, which should last into early-mid September.

All is going as planned so far, and there's not much more to add that hasn't been said many times in the past week or so. Have a blessed day.