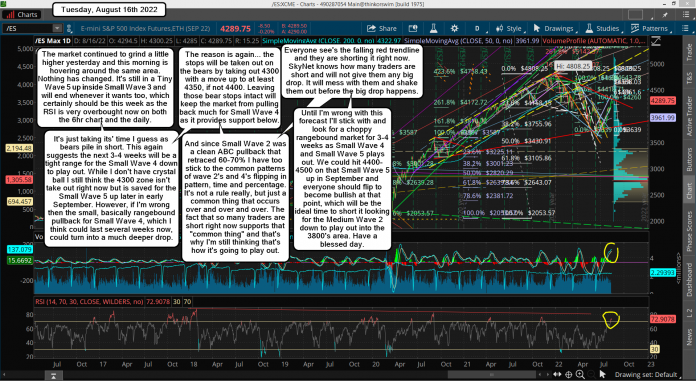 The market continued to grind a little higher yesterday and this morning is hovering around the same area. Nothing has changed. It's still in a Tiny Wave 5 up inside Small Wave 3 and will end whenever it wants too, which certainly should be this week as the RSI is very overbought now on both the 6hr chart and the daily.

It's just taking its' time I guess as bears pile in short. This again suggests the next 3-4 weeks will be a tight range for the Small Wave 4 down to play out. While I don't have crystal ball I still think the 4300 zone isn't take out right now but is saved for the Small Wave 5 up later in early September. However, if I'm wrong then the small, basically rangebound pullback for Small Wave 4, which I think could last several weeks now, could turn into a much deeper drop.

The reason is again... the stops will be taken out on the bears by taking out 4300 with a move up to at least 4350, if not 4400. Leaving those bear stops intact will keep the market from pulling back much for Small Wave 4 as it provides support below.

And since Small Wave 2 was a clean ABC pullback that retraced 60-70% I have too stick to the common patterns of wave 2's and 4's flipping in pattern, time and percentage. It's not a rule really, but just a common thing that occurs over and over and over. The fact that so many traders are short right now supports that "common thing" and that's why I'm still thinking that's how it's going to play out.

Everyone see's the falling red trendline and they are shorting it right now. SkyNet knows how many traders are short and will not give them any big drop. It will mess with them and shake them out before the big drop happens.

Until I'm wrong with this forecast I'll stick with and look for a choppy rangebound market for 3-4 weeks as Small Wave 4 and Small Wave 5 plays out. We could hit 4400-4500 on that Small Wave 5 up in September and everyone should flip to become bullish at that point, which will be the ideal time to short it looking for the Medium Wave 2 down to play out into the 3800's area. Have a blessed day.