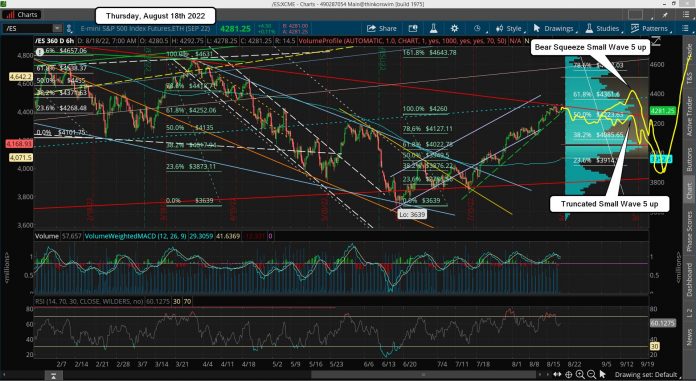 The market is still trapped between the falling red trendline of resistance and rising dashed green trendline of support. It might stay in that zone all day today but at some point one of the trendlines will break. Since it's OPEX tomorrow you know they will want to pin it at a level of max pain for both bulls and bears.

Where that is I don't know but I still think we have topped for Small Wave 3 up and will pullback some (meaning break the rising dashed green trendline of support) to start Small Wave 4 down. Again though, I don't think it will be big. I still maintain we will be in a 100-200 point range for several weeks as it plays out.

Then Small Wave 5 up will follow and take out the last bears before ending Medium Wave 1 up and rolling over for the bigger drop to a "higher low" into late September for Medium Wave 2 down. How high we go for Small Wave 5 up is unknown. It's the wildcard as if too many bears bail out over the coming weeks and become bulls (remember that a sideways rangebound market for 2-3 weeks will form a bull flag) then that last move up will be smaller.

Yes, it should go up to 4400-4500 but again, we won't know how many bears are left until we get finished with Small Wave 4, which will determine part of the points needed up for that last move. Anyone reading my blog for many years should know by now that the market is 100% controlled, rigged, manipulated, whatever word you want to use. I call the algo's that see the stops and run them (bull and bear) SkyNet from the Terminator movie as it truly is artificial intelligence.

So if there is enough shorts in the market to squeeze them up to 4400-4500 then SkyNet will do it. But if they have mostly bailed, and worst... they became bulls, then SkyNet won't run very many stops so it's not going to go up that high for that last Small Wave 5.

I did the 3 charts (posted below) yesterday near the end of the day, and added my thoughts to them below that. It's important to remain open to a "possible" failed (truncated) Small Wave 5 up. As if too many people get bullish over the next 2-3 weeks then you know it's not going to happen.

The FOMC meeting on September 2oth-21st will be the center of attention for every trader. And if the fake news starts putting out rumors that the Fed is going to stop raising rates after this meeting, or even just rising them a smaller amount then that will be viewed as bullish. It could cause that move up to 4400-4500 in front of the meeting. Or there's no rumor of that but instead just statements that are neutral, that would probably lead to more sideways movement as then it would be "unknown" what the plan is.

Then there's the rumor of them raising it even more then expected, which would be view negatively of course and likely lead to a drop in front of the meeting. Too me it all points to the first week of September being the best opportunity for a short. Either the Small Wave 5 up truncates short there with a move back up to just under the 4327.50 high, or it runs the stops to 4400-4500. I don't know which one will play out unfortunately. But I do think that some kind of rumors (planned of course) will start coming out a few weeks prior to the meeting.

It will be done for the purpose of getting traders on the wrong side of the market. Positive leaks should cause the squeeze up to 4400-4500, whereas negative ones will cause a truncated Small Wave 5 and top it out with a lower high. Then the decline will start (slowly at first) into the meeting.

I'm leaning toward this scenario versus a big squeeze. It would basically let the Small A Wave down play out weeks before the meeting, and the Small B Wave up could happen the few days in front of it. Then the meeting happens and we see the knee-jerk reaction of wild swings both direction at first but then down hard for the Small C Wave afterwards.

I don't think it will last more then 2-3 days, so the following Monday or Tuesday could put in the bottom after the FOMC. That entire ABC will complete Medium Wave 2 down and then we know what is next... the mega rally up to 5245 by the end of the year. Have a blessed day. 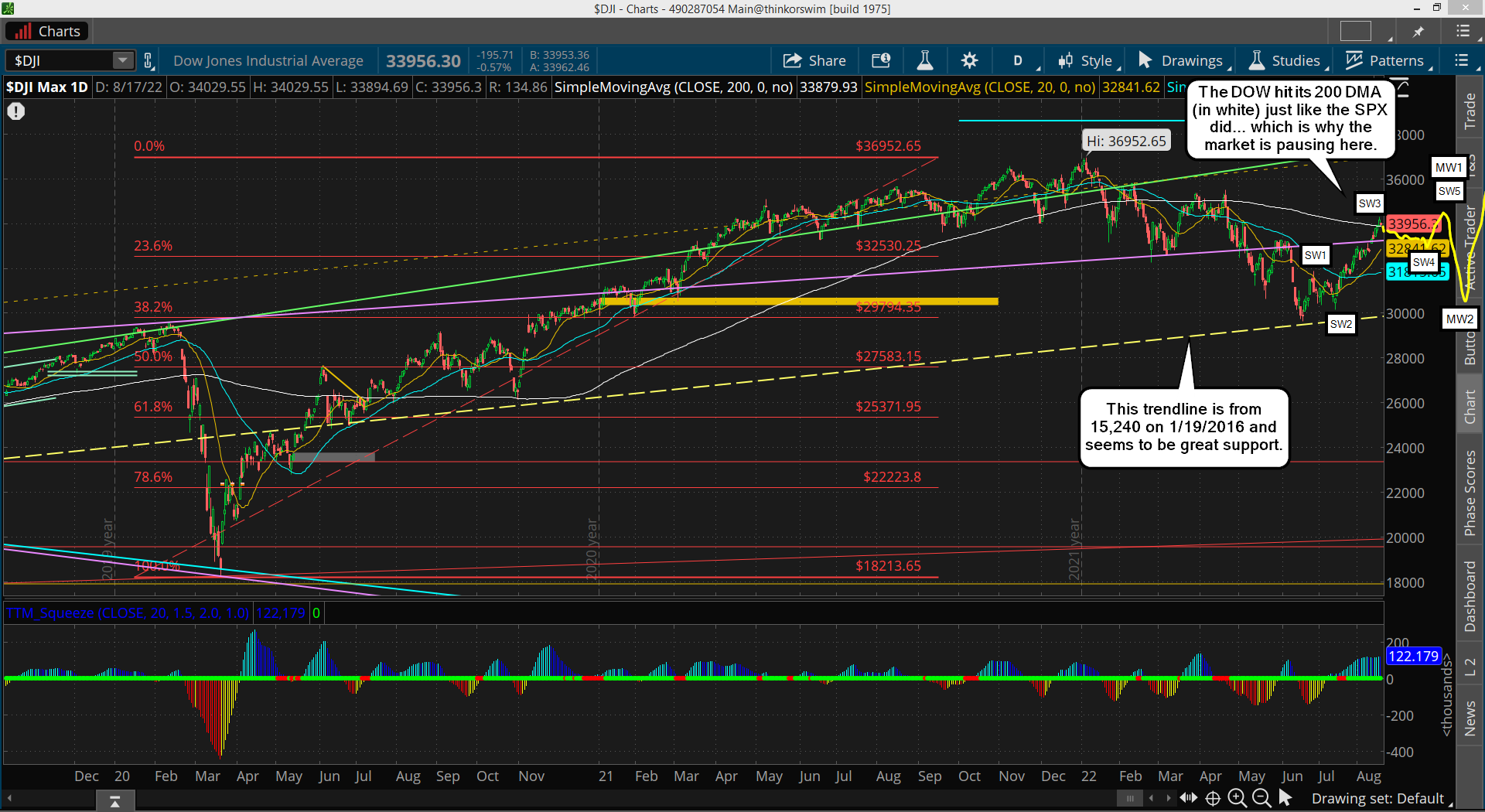 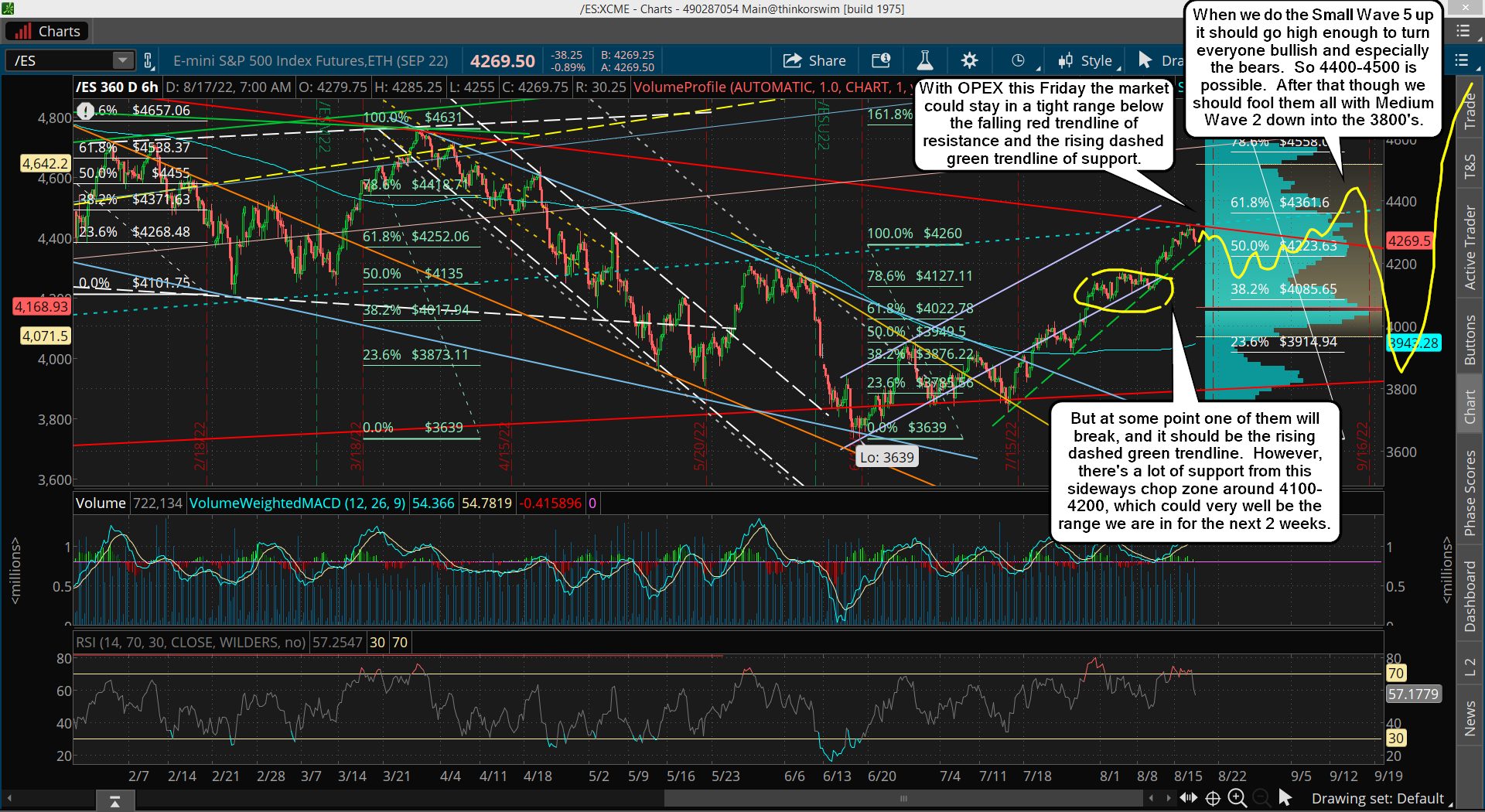 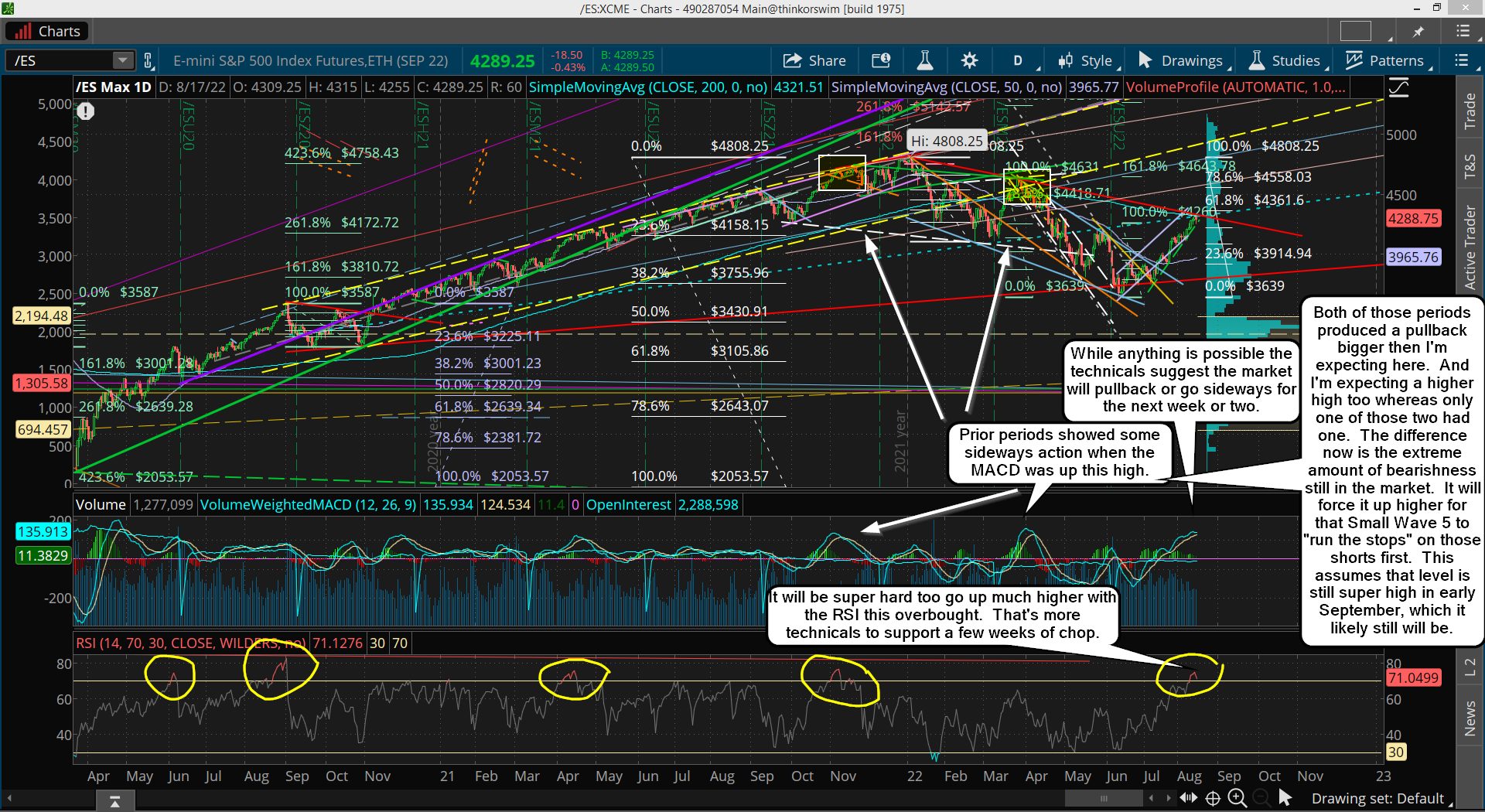 I should add that "time" is super important for that final Small Wave 5 up. If into mid-September it's still not happened then guess what? It's likely a truncated one that fools everyone that is looking for it to happen so they can short it. What if we chop in a range from 4100-4300 for the next 3 week and tease everyone by being up around the 4327.50 high of the Small Wave 3, but we don't pierce through it and "run the stops"? By the time we get into the first 2 weeks of September we could see all the bears give up and start to become bulls. If we see that happen we'll know there's no need to take them out as they took themselves out. Therefore we won't need to go up to 4400-4500, which is where everyone might be looking to short at... especially if the current bears flip to bulls? Just food for thought as we can't get married to the idea that 4400-4500 is guaranteed.