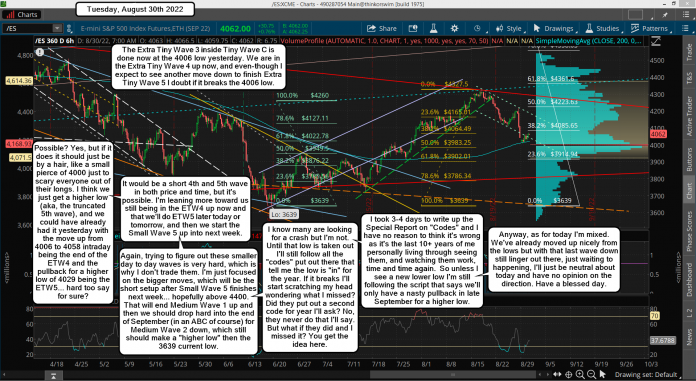 Possible? Yes, but if it does it should just be by a hair, like a small pierce of 4000 just to scary everyone out of their longs. I think we just get a higher low (aka, the truncated 5th wave), and we could have already had it yesterday with the move up from 4006 to 4058 intraday being the end of the ETW4 and the pullback for a higher low of 4029 being the ETW5... hard too say for sure?

It would be a short 4th and 5th wave in both price and time, but it's possible. I'm leaning more toward us still being in the ETW4 up now and that we'll do ETW5 later today or tomorrow, and then we start the Small Wave 5 up into next week.

Again, trying to figure out these smaller day to day waves is very hard, which is why I don't trade them. I'm just focused on the bigger moves, which will be the short setup after Small Wave 5 finishes next week... hopefully above 4400. That will end Medium Wave 1 up and then we should drop hard into the end of September (in an ABC of course) for Medium Wave 2 down, which still should make a "higher low" then the 3639 current low.

I know many are looking for a crash but I'm not. Until that low is taken out I'll still follow all the "codes" put out there that tell me the low is "in" for the year. If it breaks I'll start scratching my head wondering what I missed? Did they put out a second code for year I'll ask? No, they never do that I'll say. But what if they did and I missed it? You get the idea here.

I took 3-4 days to write up the Special Report on "Codes" and I have no reason to think it's wrong as it's the last 10+ years of me personally living through seeing them, and watching them work, time and time again.  So unless I see a new lower low I'm still following the script that says we'll only have a nasty pullback in late September for a higher low.

Anyway, as for today I'm mixed. We've already moved up nicely from the lows but with that last wave down still linger out there, just waiting to happening, I'll just be neutral about today and have no opinion on the direction. Have a blessed day.