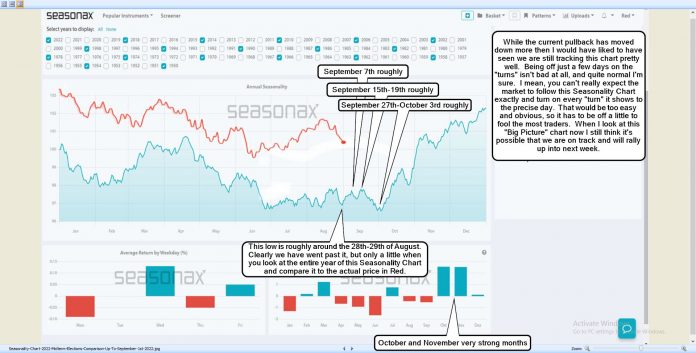 Another brutal day for the bulls yesterday, but a late day rally showed some hope of a low being in. The bottom at 3903 was spot on at the 61.8% pullback level from the 4327 high for Small Wave 3 up. So it's possible the lows are in for this pullback.

I'm still thinking we have one more move up before we drop to revisit the 3639 low. I just don't know if it will be a lower higher (like 4270's?) or a higher high (4400+). And it could drag out into the end of next week or even early the following week. The Seasonality Chart is running a little behind now I think, but there's still the chance that it could invert and put in a low mid-late next week.

I don't know what the plan here is (unfortunately). However, if we drop next week to say 3700 or below then to me it's the big buy I've been looking for... but it came early. I'm open to this inverting and will adjust according... that's what I'm saying. But from the Seasonality Chart we should NOT bottom next week but top out with either a lower high or higher high.

I've been on the sidelines for awhile now waiting as I want it to top so I can take the short but if it flips then I'll just take the long instead. Nothing is perfect in this market as you are trying to figure out what SkyNet is going to do in advance, but it has access to more data then you do... so it if it needs to go lower then I expected to run the stops on the bulls then it will do it.

Or the opposite, it goes higher then I expected to run the stops on the bears. I thought we'd stop in the 38.2% pullback area, which was around 4064, but instead we dropped to 3903, the 61.8% zone. Clearly there were more bulls long then I expected and SkyNet needed to take them out. Now (assuming yesterdays low holds?) we should see the Small Wave 5 play out into mid-late next week. Have a great holiday weekend.