Remember the past and you can see the future...

Back in the 2007-2009 stock market bubble and then recession we saw the banks come out with a new scheme to lure the last Americans into buying a home they couldn't afford at the highest prices ever.  It was called the "Adjustable Rate Mortgage" back then.  Today it's it's called "No-Down Payment Mortgage".

Real Estate prices have already peaked and rolling over, and not just in any state but even a state like Florida, which has been a super hot market the last couple of years as the sane people flee the DEMONcrat cites and states for freedom and common sense.

I was in Jacksonville in back then and I remember when it all came to an end.  I had a job back then working for Circuit City's Firedog division.  I was installing home theater systems in peoples homes.  It was great money at the time because people were buying homes like crazy with these new Adjustable Rate Mortgages (ARM's) and many had money left over to deck out that new home with a new furniture, TV and surround sound system.

I was working 7 days a week, 5 for Firedog and 2 for me on the weekend doing side jobs.  It was great while it lasted but then it all just stopped on a dime one day and Circuit City went bankrupt.  Only Best Buy survived it as the two were the biggest game in town for that business.

I even remember the day it all ended.  It was the end of January in 2006.  At the time I had built up some contacts, so I stayed very busy.  And the real estate brokers that were selling new houses were doing so the same day they went on the market, after just being newly built.  There was many new subdivisions just popping up out of nowhere then.

One day it raw land and then next there was new houses everywhere.  Many of them had  divided sections to build one neighborhood first and then had another one planned for later and even a third subdivision was planned in some neighborhoods.

I had done a good job in one or more houses in these areas I got referred by the new home owners to the real estate brokers who then told other new home owners about me.  I was quite busy for awhile, as I was working in more then one subdivision.

And then the phone stopped ringing around the end of January in 2006.  I called up my real estate contacts and everyone of those brokers told me the same thing.  They said the buyers just dried up and no one was calling them.  No one at all.  They couldn't sell anymore houses as they had ran out of buyers.  It was truly a "no bid" housing market then.

The new mortgage scam is the first "clue"...

The stock market kept going up for another year and half basically, and topped out in October of 2007.  So does this mean we have another recession or even depression looming?  I think it does as history repeats over and over... especially when you do the same thing over and over.

But will it be another 22 months like back then?  I doubt if that part will repeat as we had a good economy back then with everyone working.  Today we don't and we have inflation on top of that.  So I can't see it lasting that long this time around.  Maybe it last half that amount of time... at best I think.  But I'd lean more toward a third, up to a half... so 7-11 months is my thoughts on the next major (and final) top in the stock market before the crash.

This last "clue" is the "President Cycle" pattern...

Which I've covered many times in the past, so I'm not going into depth here again.  To summarize it there is a pattern where the stock market has big corrections when one president is leaving (especially a two term president) and another coming into office.

In 2015 we had the August 24th Flash Crash (which I call the "Lucy" crash as explained in my post called "Secret Codes"), which was a short lived correction in the market that ended by January of 2016.

President Trump then rallied the market and the economy in his entire term from 2016-2020, and then again as he was leaving we had the covid crash in 2020.

Are you starting to see a pattern here?   When Biden leaves in 2024 there will very likely be another crash, recession or depression.  It will start prior to him leaving and carry into the start of the next president.

With all these "clues" why should we expect anything different?  History repeats over and over when you keep doing the same thing (and the bankers clearly are now)... and if you are expecting different results you are insane. 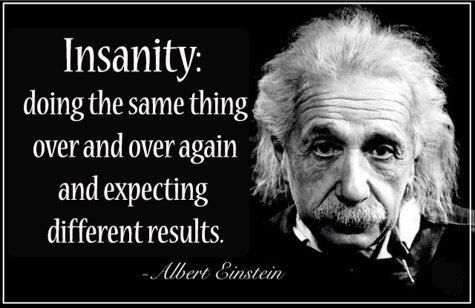 The 7 years of tribulation starts approximately on March 18th 2023...