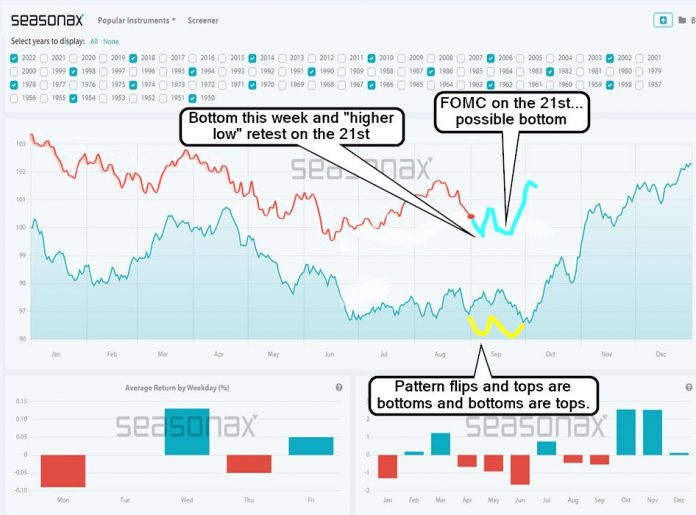 Will it ever end? Friday started off good with a strong move up after the jobs numbers at 8:30am EST, but then reversed and dropped hard again into the close. It came within a hair of taking out the 3903 low from Thursday but stopped just shy of it at 3906 and bounced into the close.

I think at this point I'm going say that we are no longer tracking the Seasonality Chart as it's just too far off now in "time", so instead of topping into the first week of September we might be bottoming.

Meaning that what appears to be an "M" pattern for the month of September, with two tops, will become a "W" pattern with two bottoms instead. The coming FOMC meeting is setting up to be a very important "turn" zone.

My thoughts are that the Seasonality Chart will be back on track shortly after the meeting and from October into the end of this year we will see a huge face ripper rally to Oscar's 5245 or higher. The more talk of interest rate hikes prior to the meeting the more likely they are to fool everyone and come out with something positive... like some date that they are going to end them possibly?

The market is just waiting to get something solid from the Fed so it can adjust accordingly. But this "uncertainty" is what the market hates, so it stays in a fear mode as it doesn't know if the rate hikes are ever going to end, and it doesn't know how many or how high it will go. Give the market a firm date to end them and a target percentage and it will celebrate with a massive rally.

Remember, the market is always "forward looking" and reacts prior to any event, so it might top out next year sometime when the last hike happens... who knows? For this week though I think we either go down to the 3800's for a higher low and then rally some into the middle of the month, and then drop one more time into the FOMC for another "higher low"... or that gets flipped.

Meaning we bottom here around the 3800's and then do a slightly lower low into the meeting (still in the 3800's probably, or just a pierce into the high 3700's). One or the other should happen to get everyone super bearish looking for new lower low or a crash.

But if the "codes" are correct, and I still think they are, we have already bottomed at the FP in June and will only make "higher lows" to trap the bears. Whether they put in that higher low close to the 3639 bottom this week or going into the FOMC is the question I can't answer, but they are going to trick as many traders as possible before the mega squeeze starts.

Hoping for the low 3700's is probably too much to ask for I think.  If we see the low 3800's this week I think it's "go time" for bulls.  I for one will be looking to go long in that area and will hold until the end of the year, and will be looking for new all time highs and beyond (5245?).  I will not try to trade in and out but will keep this core position and ride out the pullbacks.  This is my plan only and not advice to anyone.  Have a blessed day.

The real costs of an electric vehicle... 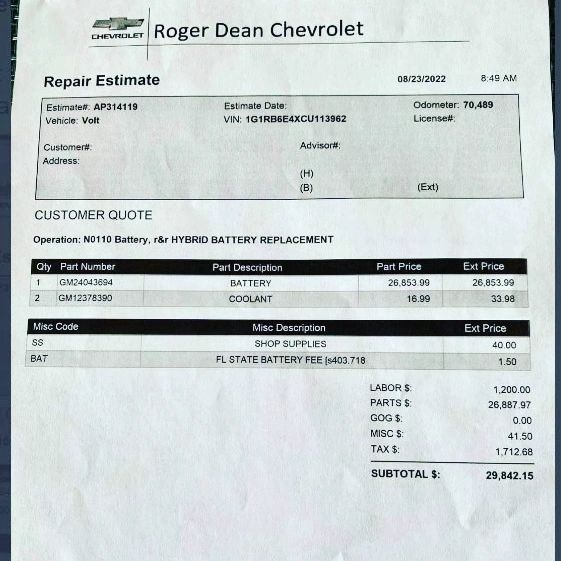