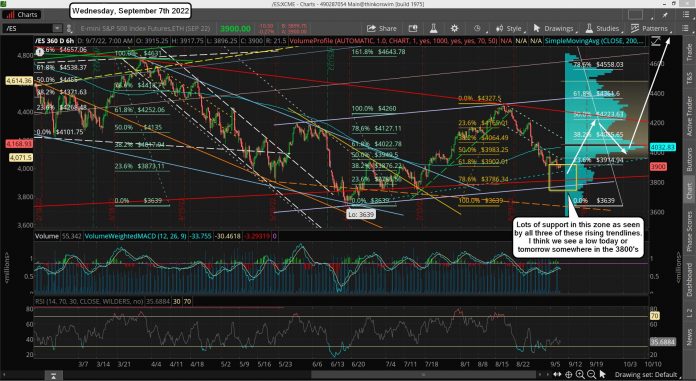 The market is now super close to the bottom of this move down and the rally up off of it should be very powerful. Calling the exact low (or high) is nearly impossible (unless I have a FP, which I don't) so while I'm thinking we could reach the 3800-3820 zone today or tomorrow we might not go that low. 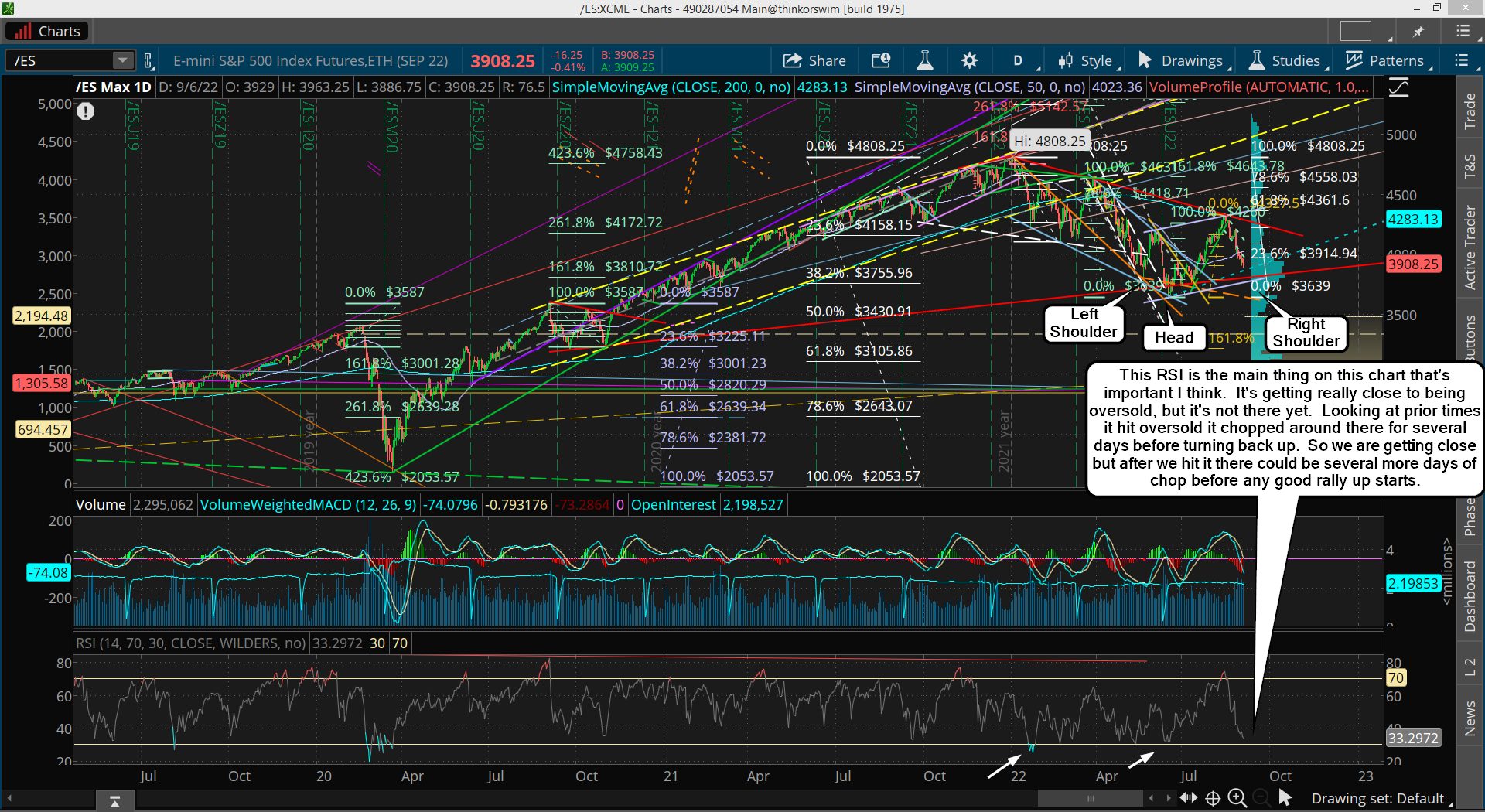 There's support in the 3860-3870 zone from the rising dashed light blue trendline and then the rising red trendline below around 3820, finally followed by the rising purple trendline just below that... which is around 3780 but I'm not expecting it to get that low.

Another possibility is that we drag out into the FOMC meeting on the 21st, as I purpose on the chart below. But this was done before I looked at the daily chart to see how close we are to getting oversold on the RSI.

I guess it could get oversold and bounce around for a couple of weeks in that oversold zone but that's not a typical pattern. Usually it doesn't spend more then a few days oversold before it goes back up. So I'm not putting too much faith in this scenario playing out. 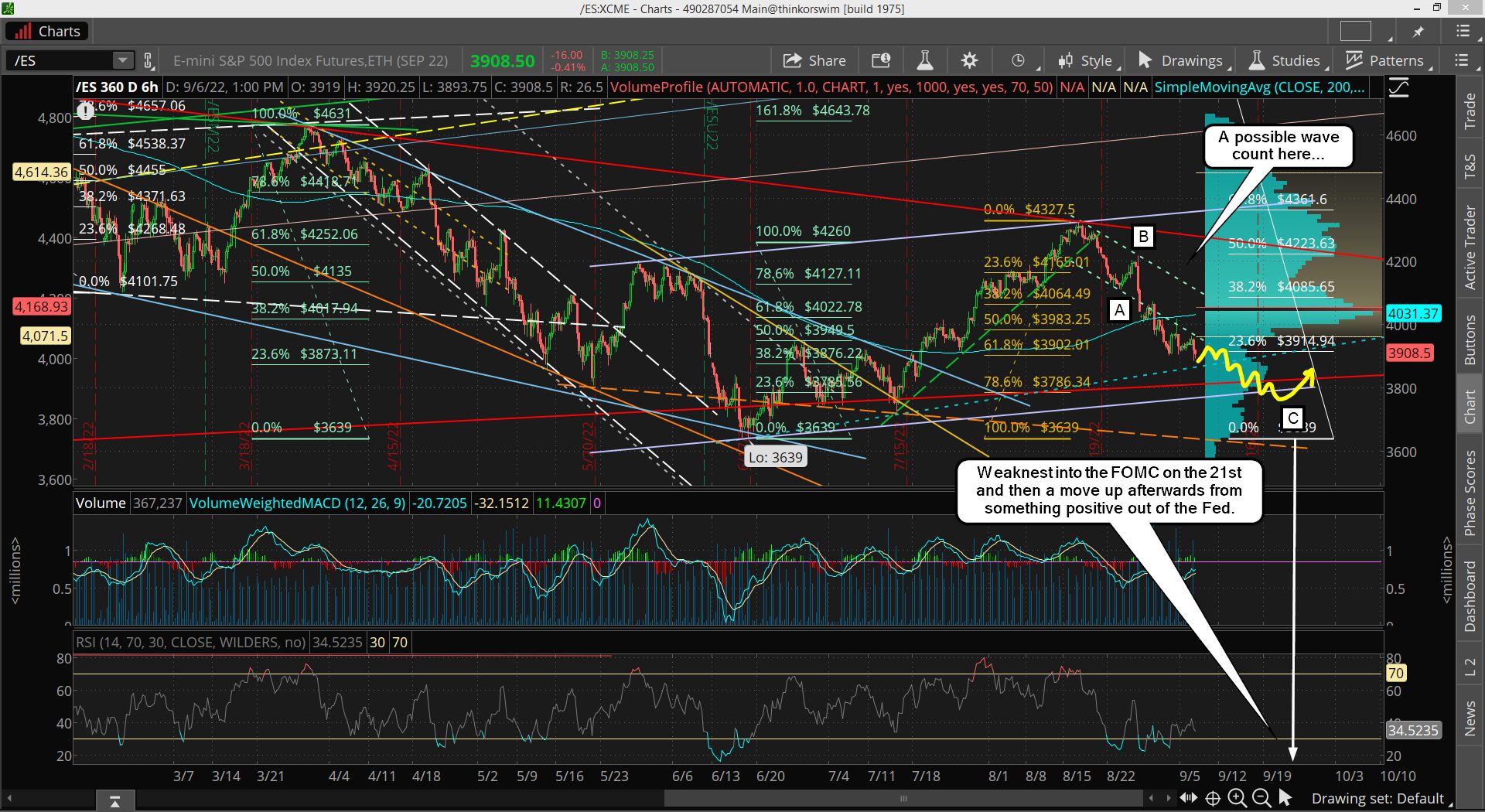 I'm leaning more toward a bottom today or tomorrow some where into the 3800's and then a nice move up to 4000+ by Friday, which at that point I'll have to look again at the short term charts to see if they got overbought on such a move or not, and the daily too as if it turns up from that rally then the lows are likely in and any pullback we get will only be "higher lows" again.

Meaning we could rally up to the falling red trendline a little over 4200 and then pullback into the FOMC for some higher low in the 3900-4000 area (something like that).

And keep in mind that the move up from the 3639 low is still likely some kind of wave 1, which is now likely "the entire" Medium Wave 1 and I just miscounted the small waves inside it.. bummer for sure as I was looking for that last Small Wave 5 up to short, but they didn't give it to me.

So, this further means this move down is the Medium Wave 2.  This all means that the move up off the low today or tomorrow will be the start of the Medium Wave 3, and even-though it will subdivide into 5 small waves the moves will be strong as they will all be inside a powerful wave 3 up.

My thoughts are that we'll carve out the Small Wave 1 up and Small Wave 2 down in this month of September and in October the Small Wave 3 up inside Medium Wave 3 up is the mega squeeze on the bears... which lines up nicely with the Seasonality Chart too. Anyway,  I'm looking to get long today or tomorrow and will ride it out into the end of the year for this core position. Have a blessed day.