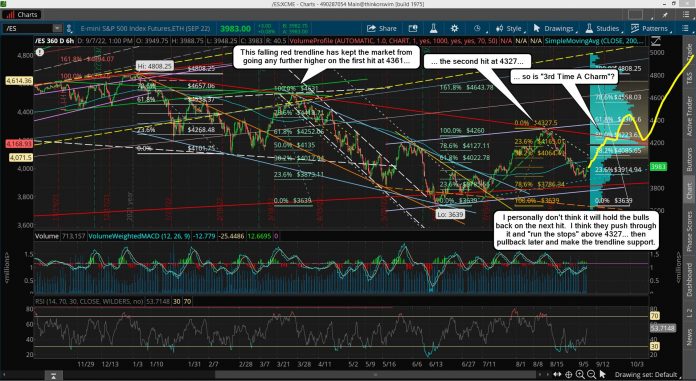 I think we have our low and it happened on Tuesday at 3886, which wasn't what I wanted but beggars can't be choosers... as the old saying goes. Today the bulls want to hold the ground they gained in yesterdays rally with only a small pullback or sideways for awhile to reset some short term charts, and then launch another move up higher.

This still might be a slow process moving up as there's that FOMC meeting looming in a few weeks, and unless the Fed leaks out something positive prior to it the moves up should be choppy. Meaning we do the old "two steps forward and one step back" dance, or in our case 2-3 green days and 1 red day.

That's all fine with me as I got my long and will ride this out into the end of the year. I fully expect the beginning to be tricky as the series of wave 1's up and 2's down happen during the month of September to setup the big wave 3's up afterwards. As for today I don't really expect too much, and again, it would be best for the bulls to go sideways here to consolidate some and make that bull flag.

Then push up again tomorrow or even later today. Lot's of overhead resistance above and the bears will try to hold their ground I'm sure. Bulls just need to hold their ground as well and let the short term charts reset and then make another push higher. Not much more to add here so I'll just wish you a very blessed day.