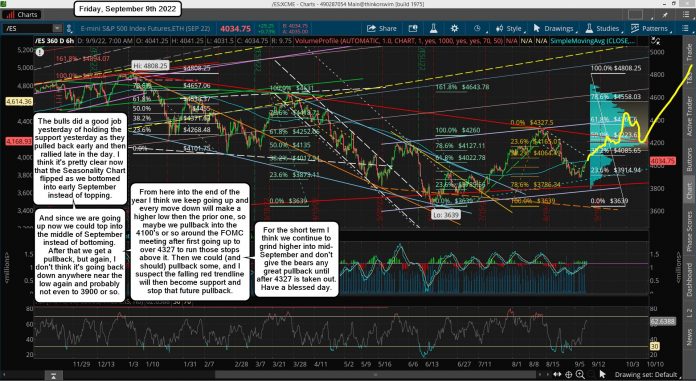 The bulls did a good job yesterday of holding the support yesterday as they pulled back early and then rallied late in the day. I think it's pretty clear now that the Seasonality Chart flipped as we bottomed into early September instead of topping.

And since we are going up now we could top into the middle of September instead of bottoming. After that we get a pullback, but again, I don't think it's going back down anywhere near the low again and probably not even to 3900 or so.

From here into the end of the year I think we keep going up and every move down will make a higher low then the prior one, so maybe we pullback into the 4100's or so around the FOMC meeting after first going up to over 4327 to run those stops above it. Then we could (and should) pullback some, and I suspect the falling red trendline will then become support and stop that future pullback.

For the short term I think we continue to grind higher into mid-September and don't give the bears any great pullback until after 4327 is taken out. Have a blessed day.

Tons of people looking for huge drops now. Even Peter Eliades, who is someone I like, is calling for another big drop.   But I think he's wrong and so is everyone else.

I see the news talking super bearish too, and other bloggers. Very few are bullish here, which makes me feel even more sure that a huge drop isn't going to play out like everyone else thinks.

I just remember all the times in the past where I fell for all the bearish calls and went short looking for a crash only to see a super strong rally squeeze me to death... and no new lower low every happened.

What did work was the "codes" and the "FP's", and that's what I'm listening too now. Can we get another strong move down? Sure, but it should NOT take out the low. And I still don't see any good pullback until they run the stops above the prior high of 4327, which I'm calling the end of Medium Wave 1 and low in this pullback the end of Medium Wave 2 down.

The bulls should grind their way up to the falling red trendline of resistance and pause there briefly to allow bears to short it.  Then push through it and cause a squeeze.  That trendline is around 4270-4280 now, and goes lower over time.  When it hits it, pauses, and then pushes through it, there should be enough bears short to squeeze up through 4327 too and run those stop.  Then a pullback to retest the falling trendline should happen, which would make it support at that time instead of resistance currently.  Have a great weekend.