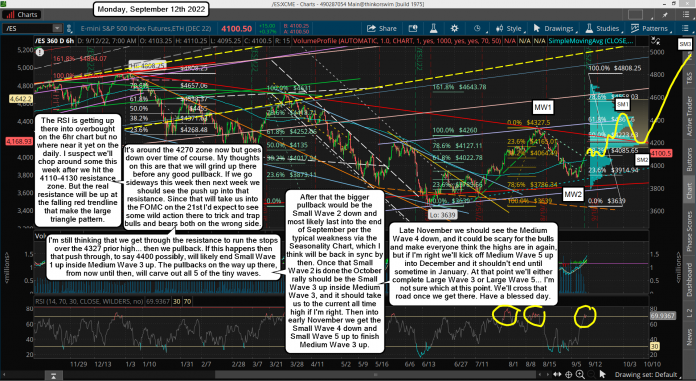 The RSI is getting up there into overbought on the 6hr chart but no where near it yet on the daily. I suspect we'll chop around some this week after we hit the 4110-4130 resistance zone. But the real resistance will be up at the falling red trendline that make the large triangle pattern.

It's around the 4270 zone now but goes down over time of course. My thoughts on this are that we will grind up there before any good pullback. If we go sideways this week then next week we should see the push up into that resistance. Since that will take us into the FOMC on the 21st I'd expect to see some wild action there to trick and trap bulls and bears both on the wrong side.

I'm still thinking that we get through the resistance to run the stops over the 4327 prior high... then we pullback. If this happens then that push through, to say 4400 possibly, will likely end Small Wave 1 up inside Medium Wave 3 up. The pullbacks on the way up there, from now until then, will carve out all 5 of the tiny waves.

Late November we should see the Medium Wave 4 down, and it could be scary for the bulls and make everyone think the highs are in again, but if I'm right we'll kick off Medium Wave 5 up into December and it shouldn't end until sometime in January. At that point we'll either complete Large Wave 3 or Large Wave 5... I'm not sure which at this point. We'll cross that road once we get there. Have a blessed day.