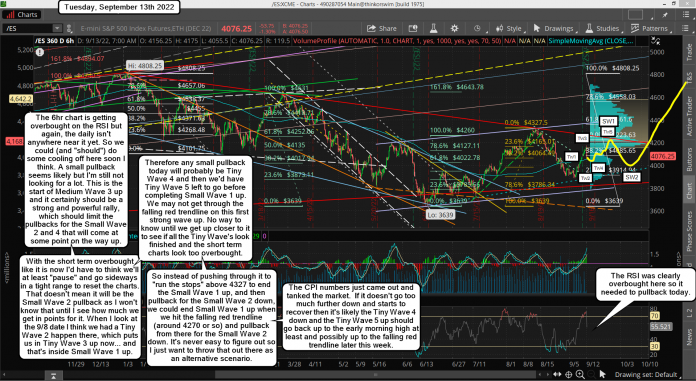 The 6hr chart is getting overbought on the RSI but again, the daily isn't anywhere near it yet. So we could (and "should") do some cooling off here soon I think. A small pullback seems likely but I'm still not looking for a lot. This is the start of Medium Wave 3 up and it certainly should be a strong and powerful rally, which should limit the pullbacks for the Small Wave 2 and 4 that will come at some point on the way up.

With the short term overbought like it is now I'd have to think we'll at least "pause" and go sideways in a tight range to reset the charts. That doesn't mean it will be the Small Wave 2 pullback as I won't know that until I see how much we get in points for it. When I look at the 9/8 date I think we had a Tiny Wave 2 happen there, which puts us in Tiny Wave 3 up now... and that's inside Small Wave 1 up.

Therefore any small pullback today will probably be Tiny Wave 4 and then we'd have Tiny Wave 5 left to go before completing Small Wave 1 up. We may not get through the falling red trendline on this first strong wave up. No way to know until we get up closer to it to see if all the Tiny Wave's look finished and the short term charts look too overbought.

The CPI numbers just came out and tanked the market.  If it doesn't go too much further down and starts to recover then it's likely the Tiny Wave 4 down and the Tiny Wave 5 up should go back up to the early morning high at least and possibly up to the falling red trendline later this week.