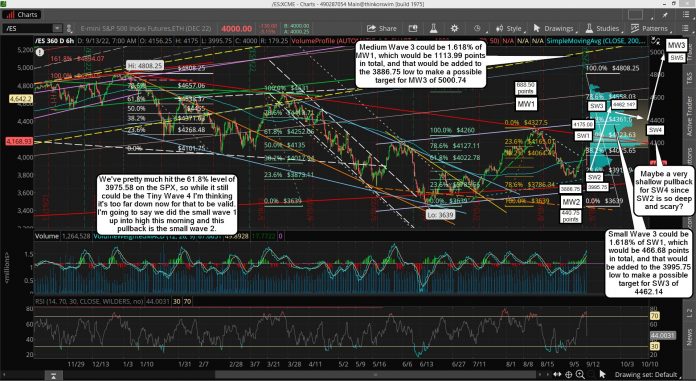 The drop yesterday was way too deep to be any tiny wave, so I've now got two adjustments for the waves in play. One is that the rally up to the 4175.00 high in the premarket ended Small Wave 1 inside Medium Wave 3 up. The drop would then be Small Wave 2 down and as long as it doesn't take out the low of 3886.75, where that Small Wave 1 up started, then that is the most likely wave count.

It opens the door for a powerful Small Wave 3 up inside Medium Wave 3 to start soon. It is my preferred count, but there's another alternative one as well. The drop from 4327.50 to the low of 3886.75 did NOT end Medium Wave 2 down and it is subdividing into an ABC pattern where that first drop was just the Small A Wave, the rally to 4175.00 was the Small B Wave and we are currently in the Small C Wave down now.

This would be the count if that 3886.75 low is taken out. I still think the 3639 low is "The LOW" and it won't be broken but we are entering the weaker second half of September right now so the market can stay trapped in a range of several hundred points up and down until this month ends and October starts, which is very bullish.

There's a very obvious triangle pattern here with the falling red trendline of resistance to the rising red trendline of support. We could just bounce in-between them both for the next 2 weeks until September ends, and right now that's looking very likely.

I'm still holding my long as it's out into the end of this year, but of course I would have liked to have seen this big drop in advance as I might have waited for it to enter. Surprisingly though I'm still up on my position... strange. Here's a chart I posted in the chatroom yesterday... 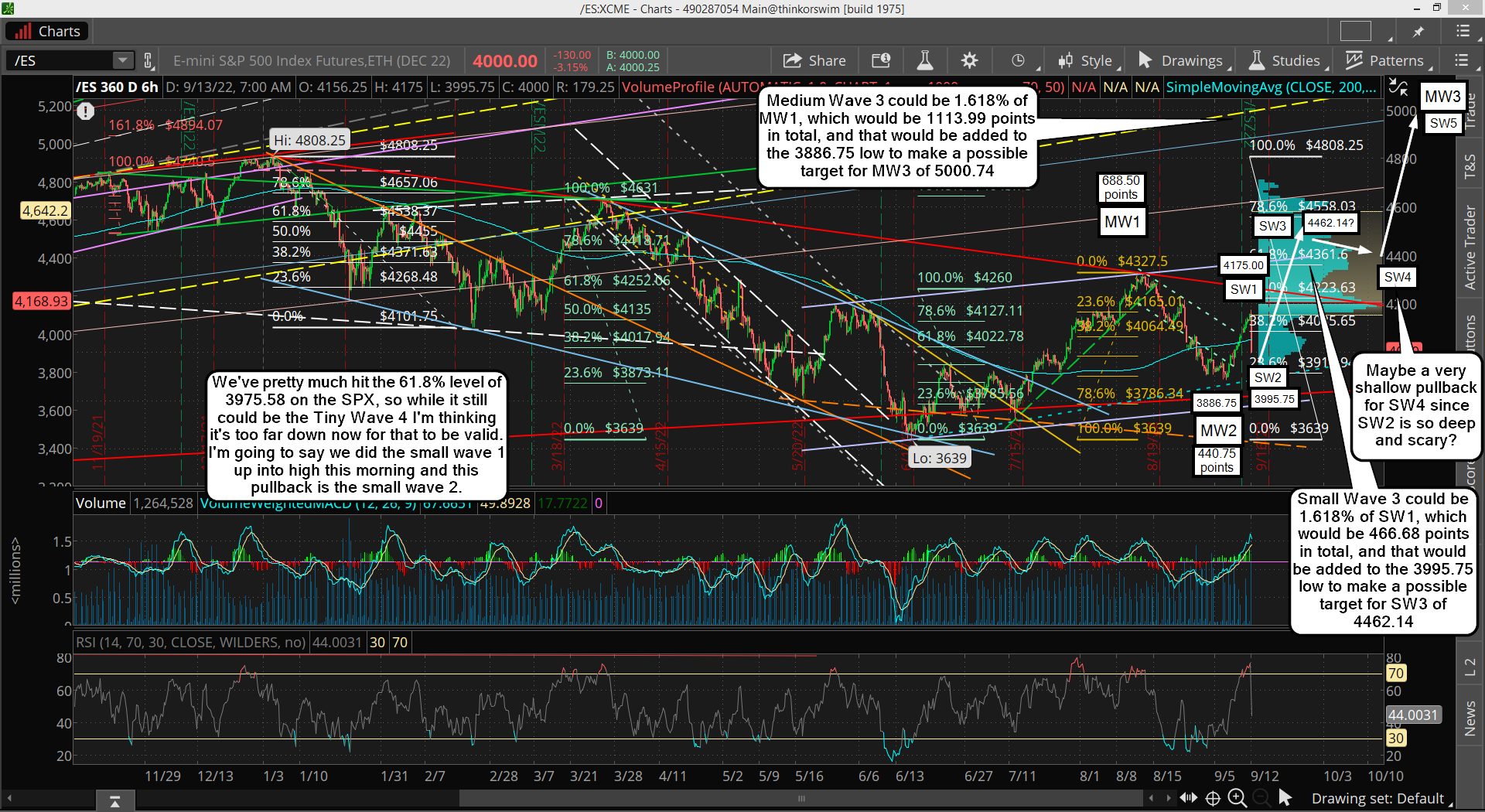 We have went lower for my SW2 there then the 3995.75 low I have marked on it, but again, as long as we don't take out the 3886.75 low that count is still valid. If we take it out then we are subdividing into an ABC for Medium Wave 2 down... pretty simple, but not easy to predict in advance which one is right.

Overall though it looks like we could see another 2 weeks inside this triangle with wild swings in both directions to shake both sides out and trap them on the wrong.   That means the chart above needs adjusted of course.

As for today, I don't expect too much more downside but thee 6hr RSI isn't oversold quite yet, so more downside is possible this week. So I'll just have no opinion on what happens today as I don't know? Normally, after a nasty all down day like yesterday, there is some bounce and retest with a slightly lower low. Call the drop some degree of a wave 3 and the bounce a wave 4 and retest a wave 5... that's the normal pattern.

Will it happen? I don't know? I'm just focused on the end of this month now as I'd love to see multiple series of wave 1's up and wave 2's down play out, in various degrees of course, as that would setup a super powerful multiple wave 3 up in October. Have a blessed day.