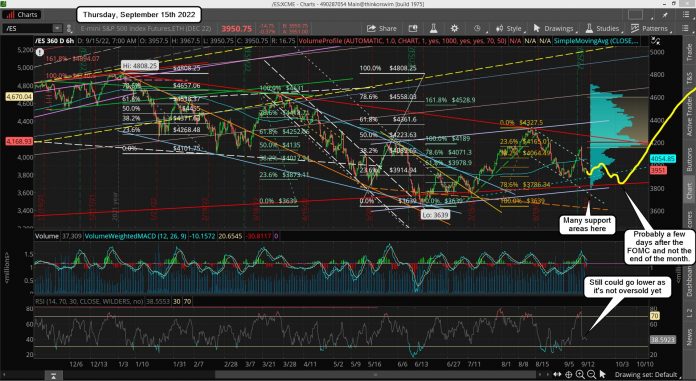 Looks like yesterday was a dud day after all, with possibly the wave 4 bounce and wave 5 slightly lower low finishing that five wave pattern.  I'm going to call them Extra Tiny Waves as again, I (now) think the Medium Wave 2 down will subdivide into an ABC pattern that should complete by the end of this month.

That means the Tuesday morning high before the CPI was the end of Tiny Wave 2 up inside Small Wave C down, (inside Medium Wave 2 down).  The large drop all day on Tuesday was likely the Extra Tiny Waves, 1,2 and 3... even-though you can't really see where 1 and 2 are at.  I say that because it's a very obvious wave 3 of some degree as it was too strong to be any other wave.

I didn't really have much opinion about yesterday but I did suggest we could finish the Tiny Wave 1 down by doing the Extra Tiny Wave 4 bounce and Extra Tiny Wave 5 final move, and that does look complete now, but it might need a little more time to finish it... not sure?

If it completes today or even tomorrow, then next will be the Tiny Wave 2 rally into the FOMC meeting next week I believe.  It might reach into the 4100's but I wouldn't expect too much as again, traders will be nervous in front of it I'm sure. 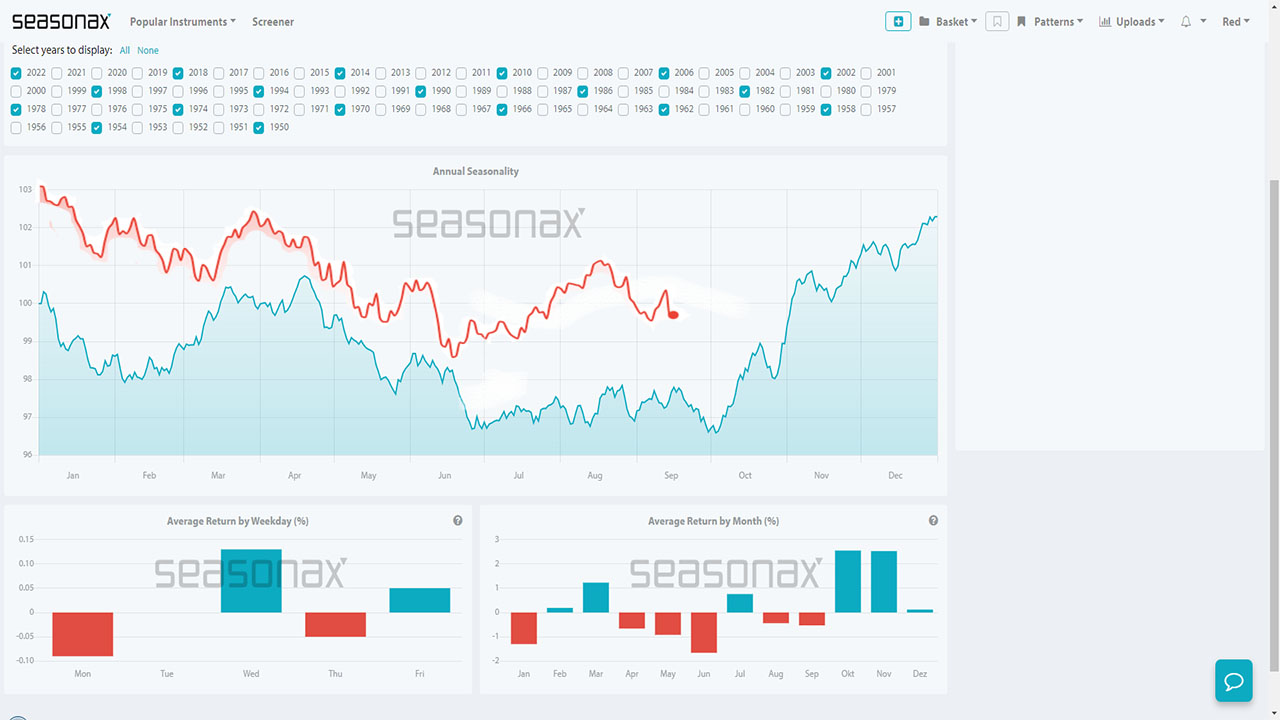 That will limit the rally... and as you can see from the updated Seasonality Chart we are entering the weak part of the month now.  Bounces should be small with the trend still down.  And I'm noticing that it's running a little ahead of itself, meaning the moves up or down are starting earlier by a few days then on the chart.

It opens the door for the bottom to happen a few days before what's shown on the chart, which I'd guess is the 29th to maybe the 3rd of October.  If this "running early continues then we could bottom several days after the FOMC?

Regardless of what is said there will likely be some kind of shakeout after it, which would then be the Tiny Wave 3, 4 and 5 to complete Small Wave C down and finally end Medium Wave 2... and that should all line up with the Seasonality Chart fairly closely (but again, possibly the market is running ahead of it some).  I don't know how low it will go but it's probably going to take out the 3886 low to hit the stops on any bulls that are still long from that level.

I still do NOT think the 3639 low will be hit as I maintain that the low is "in" for the year, which I covered in my special post called "Secret Codes" back on August 6th.  We could dip below 3800 briefly but that's about all I see for now.

As for today, I'm again unsure.  We could start the Tiny Wave 2 up or still be in chop mode as we finish all the Extra Tiny Waves inside Tiny Wave 1 down.  We hit a low of 3936.50 yesterday and that could have been the bottom for it as we did have a move up higher through out the day, which could have been the ETW4 and 5, or they continue to play today and possibly into Friday... then over the weekend the bounce starts for TW2.

I posted the following at the end of the day yesterday in the chatroom... 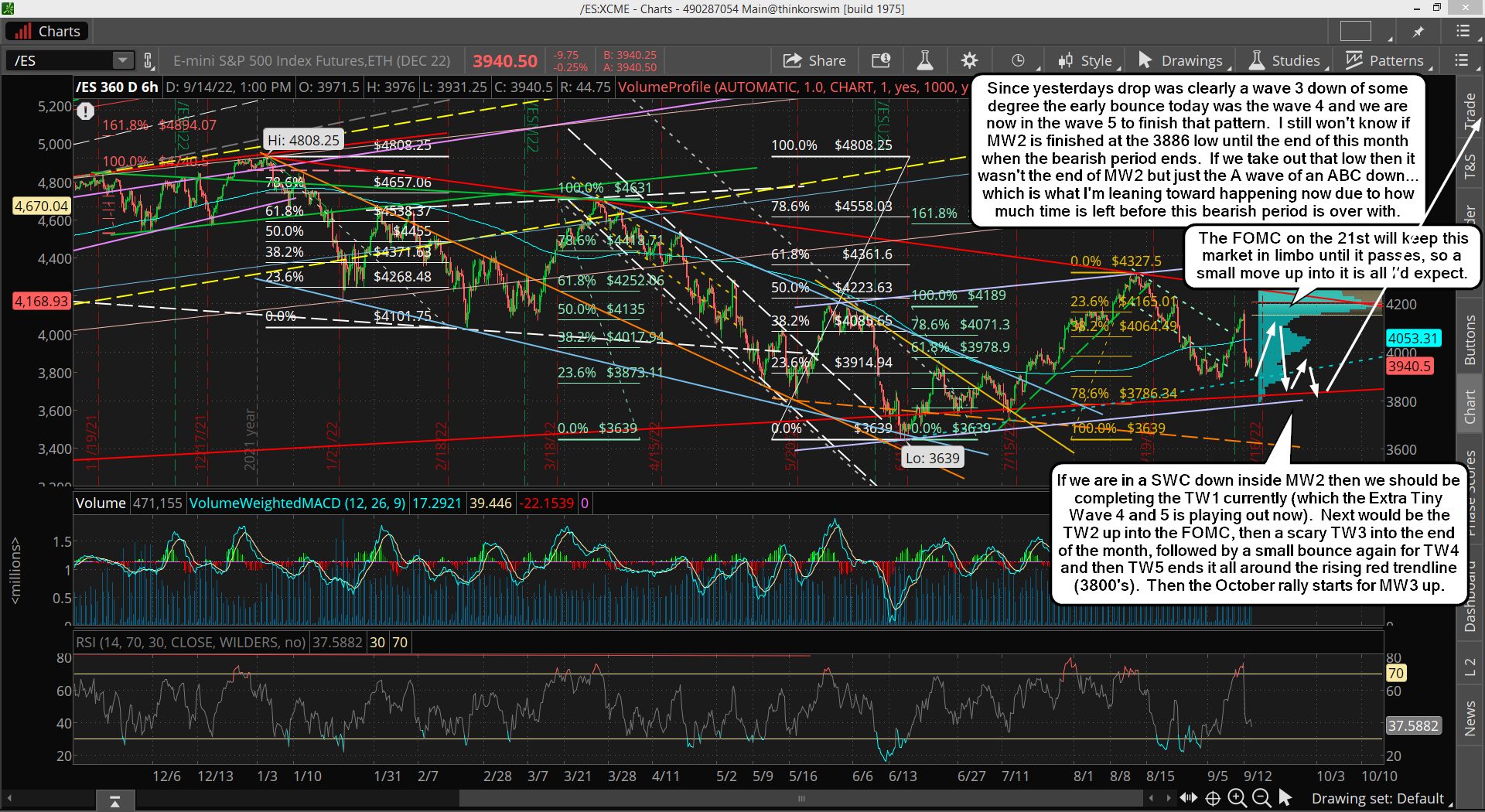 Since yesterdays drop was clearly a wave 3 down of some degree the early bounce today was the wave 4 and we are now in the wave 5 to finish that pattern. I still won't know if MW2 is finished at the 3886 low until the end of this month when the bearish period ends. If we take out that low then it wasn't the end of MW2 but just the A wave of an ABC down... which is what I'm leaning toward happening now due to how much time is left before this bearish period is over with.

The FOMC on the 21st will keep this market in limbo until it passes, so a small move up into it is all I'd expect.

If we are in a SWC down inside MW2 then we should be completing the TW1 currently (which the Extra Tiny Wave 4 and 5 is playing out now). Next would be the TW2 up into the FOMC, then a scary TW3 into the end of the month, followed by a small bounce again for TW4 and then TW5 ends it all around the rising red trendline (3800's). Then the October rally starts for MW3 up.