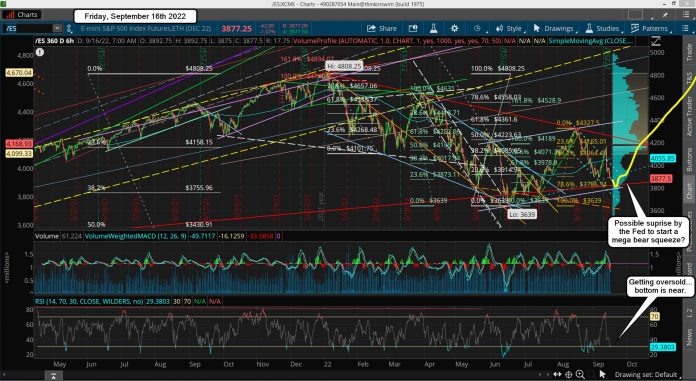 More chop yesterday but today we see it has broken down. If we reach the mid-low 3800's today then that could be the end of the move down as the RSI on the 6hr chart is into oversold now, so a move up next week looks likely.

It's still not known how much of of course as the "unknown" from the FOMC should keep us all guessing. I also wonder if the Fed's are planning something sneaky at the meeting that they might say to spark a huge rally while everyone is short and looking for a crash. The news is all super negative with talks of them raising the interest rate as much as 1.0% this meeting, instead of just 0.75% that was talked about months ago.  So while I don't know what their plan is, but any surprise certainly could make it a major turning point period.

The demoncrats might also want the markets up big in front of the midterm elections so they have something to run on as we all know there's absolutely nothing positive from anything they have done or said since Pedo Joe stole the election in 2020.  This is just me "thinking out loud" as there no proof that this will happen.

As for now, I've said many times the smaller waves are hard to figure out as they can subdivide and therefore throw you off on when any certain wave really ended. All of last week I thought that the Medium Wave 2 down ended at the 3886.75 low on 9/6 and that we've started the Medium Wave 3 up now. But then that huge drop on Tuesday of this week had me rethink that and suggest the idea that it didn't end there but subdivided into an ABC and that low was only the end of Small Wave A down.

And since we see the futures have now taken out that prior low we clearly have a confirmed ABC pattern and we are in the Small C Wave now.  We are into a big support zone from many rising trendlines as you can see on the chart.  Where it stops at I don't know but it's likely to end early now that we didn't get any bounce the last day or two.

I had thought we might bounce up slightly to "possibly" as high as 4100, and then down after the FOMC meeting into the low 3800's... but it didn't happen.  Instead we are dropping now into the 3800's and could bottom today or into the futures Sunday night, or possibly the open on Monday?

This is why I threw the idea out there that the FOMC could be a major turning point and that all the negative news about it is planned to keep the sheep on the wrong side of the market.  If everyone is massively short going into it then you should be nervous about something positive being said as it will start the mother of al short squeezes if that happens.

It's sad to say but you really have to think like a criminal here and that's what I'm trying to do.  Since we know they control the news, and us it all the time to steal money from the retail public, you have to think about the opposite of what they are projecting out there right now.  What is the role the media plays... that's the question.

The answer is of course... to deceive the public.  Whether that is with the fake news on political subjects, medical treatments (poison vaccine) or direction of the stock market.. it's all done to keep you scared, poor and sick all the time.  Be a good little sheep and just do as we say... that's their motto.

My reply to that... Let's Go Brandon!

I also pointed out recently that the Seasonality Chart appears to be running a little early.  Meaning that it has been topping out or bottoming out several days to as much as a week before what the chart shows.  We can see on it that in June the low should have came around the 24th-30th from the looks of it, but it hit on June 17th instead.

The August high also came early on the 16th as on the chart I'd say the 20th-27th was actual topping zone.

If this continues then the expected low shown on the Seasonality Chart of roughly the 28th of September to possibly the 3rd of October could again be off and the market might bottom as much as a week early.

This could mean that around the 21st (the FOMC meeting) is the bottom.  And that doesn't mean on the exact day.  We could bottom today or Sunday/Monday and then bounce small into the meeting... which would likely just get more bears to short that bounce thinking a crash is coming afterwards.

If history repeats then it's all a huge bear trapped that pumped and pushed by the fake news that the Fed is going to murder the market.  Using the opposite thinking I'd instruct the Fed to stop raising rates so the market will rally up in front of the midterm elections.  It's all fake of course but it would get the demoncrats something to brag about.  Not that it will matter as Americans are going to vote RED anyway I think, but it's at least something for them to run on (cheating aside of course).

In summary I'm thinking we could see the last low today or into Sunday/Monday and then a gently float up into the FOMC where some surprise positive statement sparks a mega bear squeeze.  Have a wonderful weekend.