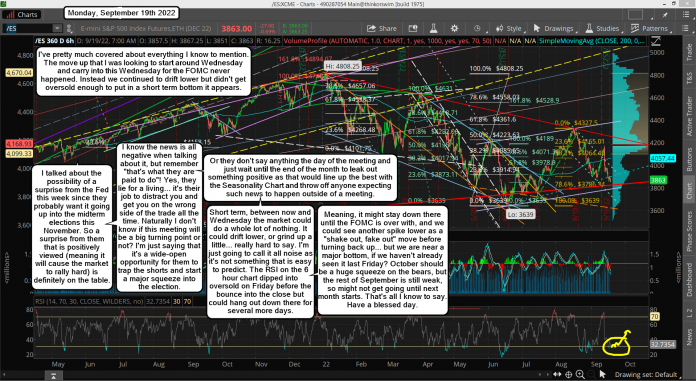 I've pretty much covered about everything I know to mention. The move up that I was looking to start around Wednesday and carry into this Wednesday for the FOMC never happened. Instead we continued to drift lower but didn't get oversold enough to put in a short term bottom it appears.

I talked about the possibility of a surprise from the Fed this week since they probably want it going up into the midterm elections this November. So a surprise from them that is positively viewed (meaning it will cause the market to rally hard) is definitely on the table.

I know the news is all negative when talking about it, but remember "that's what they are paid to do"! Yes, they lie for a living... it's their job to distract you and get you on the wrong side of the trade all the time. Naturally I don't know if this meeting will be a big turning point or not? I'm just saying that it's a wide-open opportunity for them to trap the shorts and start a major squeeze into the election.

Or they don't say anything the day of the meeting and just wait until the end of the month to leak out something positive as that would line up the best with the Seasonality Chart and throw off anyone expecting such news to happen outside of a meeting.

Short term, between now and Wednesday the market could do a whole lot of nothing. It could drift lower, or grind up a little... really hard to say. I'm just going to call it all noise as it's not something that is easy to predict. The RSI on the 6 hour chart dipped into oversold on Friday before the bounce into the close but could hang out down there for several more days.

Meaning, it might stay down there until the FOMC is over with, and we could see another spike lower as a "shake out, fake out" move before turning back up... but we are near a major bottom, if we haven't already seen it last Friday? October should be a huge squeeze on the bears, but the rest of September is still weak, so might not get going until next month starts. That's all I know to say. Have a blessed day.