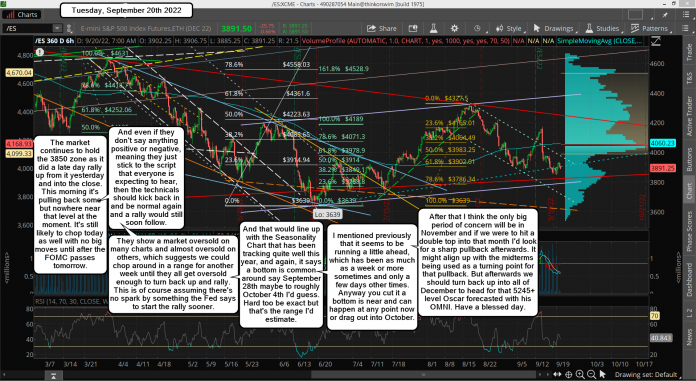 The market continues to hold the 3850 zone as it did a late day rally up from it yesterday and into the close. This morning it's pulling back some but nowhere near that level at the moment. It's still likely to chop today as well with no big moves until after the FOMC passes tomorrow.

And even if they don't say anything positive or negative, meaning they just stick to the script that everyone is expecting to hear, then the technicals should kick back in and be normal again and a rally would still soon follow.

They show a market oversold on many charts and almost oversold on others, which suggests we could chop around in a range for another week until they all get oversold enough to turn back up and rally. This is of course assuming there's no spark by something the Fed says to start the rally sooner.

And that would line up with the Seasonality Chart that has been tracking quite well this year, and again, it says a bottom is common around say September 28th maybe to roughly October 4th I'd guess. Hard too be exact but that's the range I'd estimate.

I mentioned previously that it seems to be running a little ahead, which has been as much as a week or more sometimes and only a few days other times. Anyway you cut it a bottom is near and can happen at any point now or drag out into October.

After that I think the only big period of concern will be in November and if we were to hit a double top into that month I'd look for a sharp pullback afterwards. It might align up with the midterms being used as a turning point for that pullback. But afterwards we should turn back up into all of December to head for that 5245+ level Oscar forecasted with his OMNI. Have a blessed day.