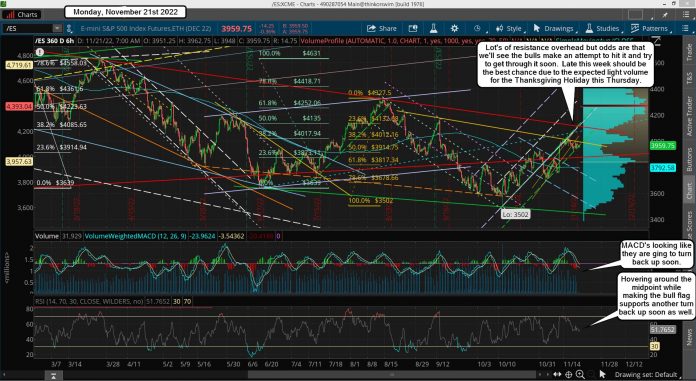 Looking at the daily chart and weekly this rally is likely to fail soon. While the weekly is just up around the halfway mark (50) on the RSI the daily is getting close to overbought. I believe it can continue to grind up around here all of this week but at some point soon it's likely going to rollover and take another leg down.

Zooming out on an even bigger picture the MACD's on the monthly chart are still pointing down sharply now but since it's a monthly chart it won't be seen in advance when a turn back up happens on it. It might take 2-3 months for it to show up, and the MACD's aren't the best indicator to track. 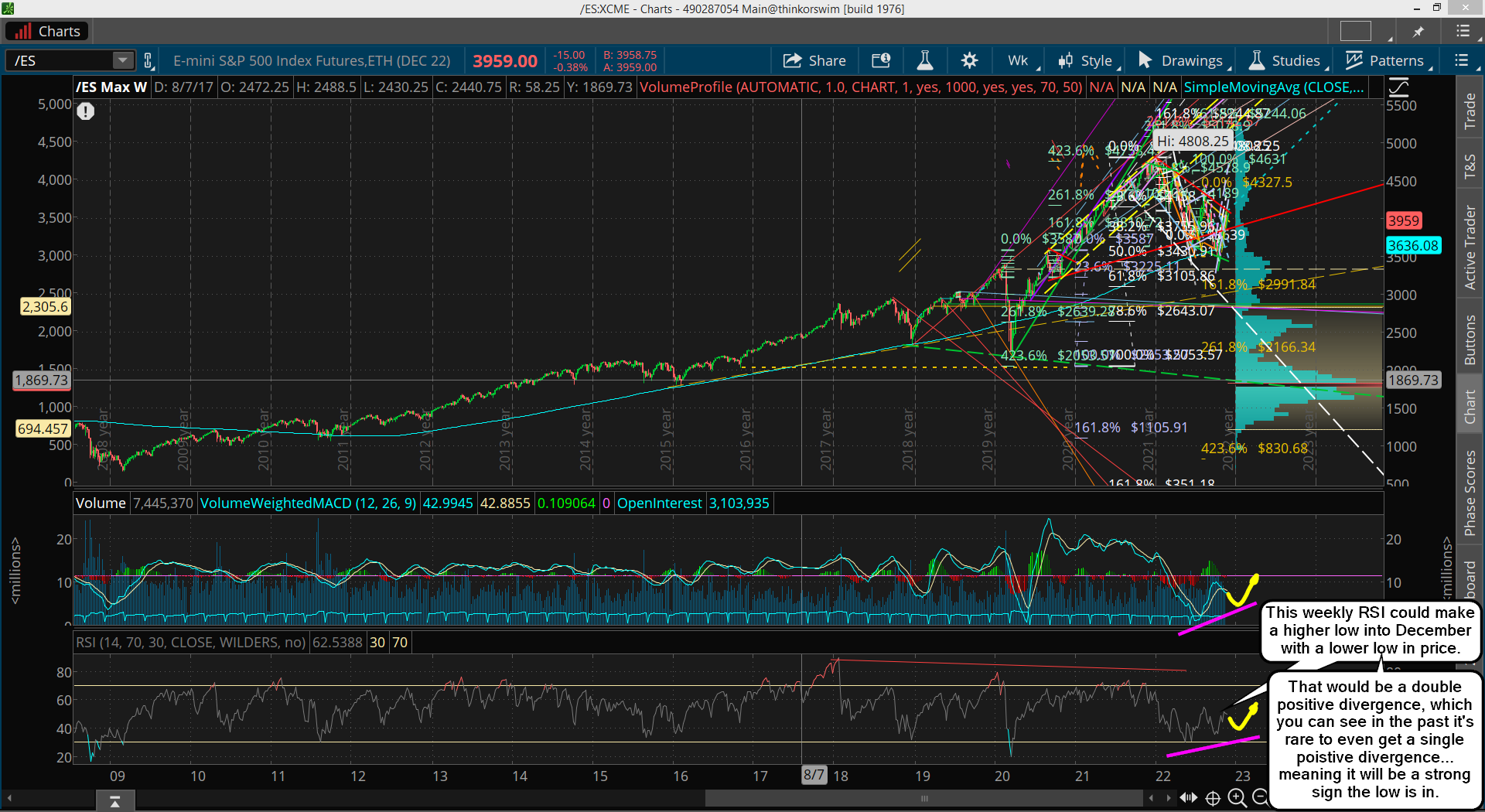 If it did show up on the weekly too then that would be a double positive divergence there and a single one on the monthly, which if that doesn't mark the low nothing will. It's rare to get them on the monthly chart, so if one does appear it will be a powerful signal. The reason they are rare is that one could occur early in the month but get erased late in the month with the rally back up stating and putting in a bottoming tail on that monthly candle that won't close out until the end of the month.

But they more commonly show up on the daily chart, which back at the 2020 bottom you can see that there was multiple positive divergences there. Getting one to show up on a monthly chart isn't likely, but we could see another one on the weekly into December I think. Shorter term I think we do more chopping around this week to keep forming that bull flag. 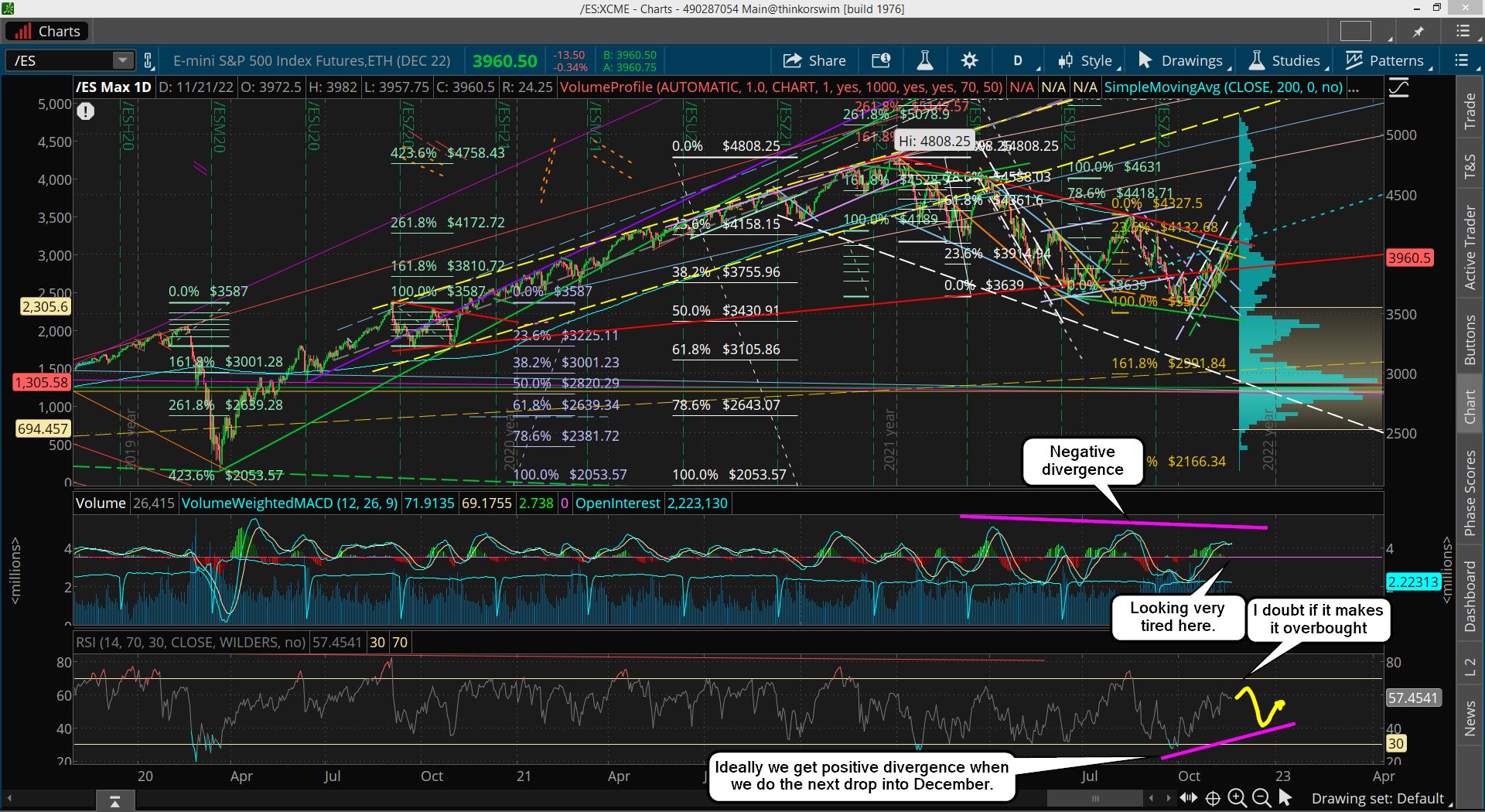 The longer it fills out the more bulls that will buy it and more bears that give up. That would be fine if the charts weren't close to overbought, but I'm afraid the pop up from the bull flag will end the move.

Lot's of overhead resistance that is likely going to stop this rally I think. That's a big range for it to reach into, so I don't know what level to focus on, but instead will just look at the charts to try and get a feel for when they appear to be out of steam and ready to rollover. My best guess is late this week we get that last pop higher.

Then we start to roll next week into December. I'd love to see 4200 or so as then the fall red trendline would be pierced. It would shake out the last bear and lure in bulls, which would setup the market for a nasty drop into the end of this month and early December. Have a blessed day.