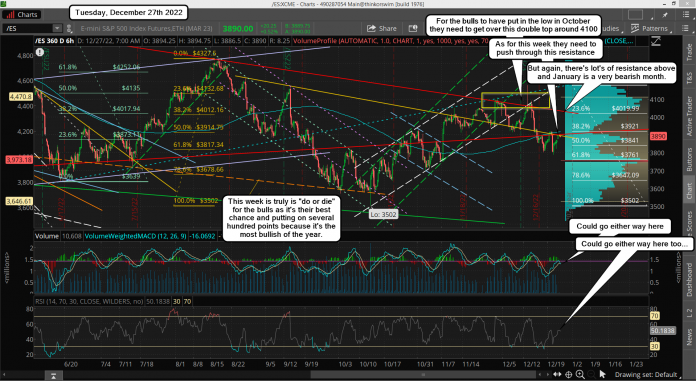 I hope everyone had a great holiday over the weekend. It's not over yet as there's the New Year holiday weekend coming up next, so this week is likely to ge a light volume week. Normally it's the most bullish week of the year, but the bigger picture technicals don't support it... meaning we could still go up but I doubt if it's some mega squeeze move.

There's tons of resistance overhead around the 3920 zone and even more resistance above that. The bulls must take out the 4100 zone double top to mark the October low as "the low" for this correction. I'm both long and short now and I'd love to see a huge rally that takes out 4100  and runs to 4300+ as I have more longs on then short, but I just don't see it happening right now with such bearish looking technicals on bigger time frames.

The DOW is the only chart that is strong but if it loses the 200 day simple moving average the market is toast. I've been bullish for months as most of you know but the failure of some many big boy stocks to get over their 200 SMA and the SPX, Nasdaq and Russell all failing too just makes me face reality, and that's the odds of "the low" being in now are slim. 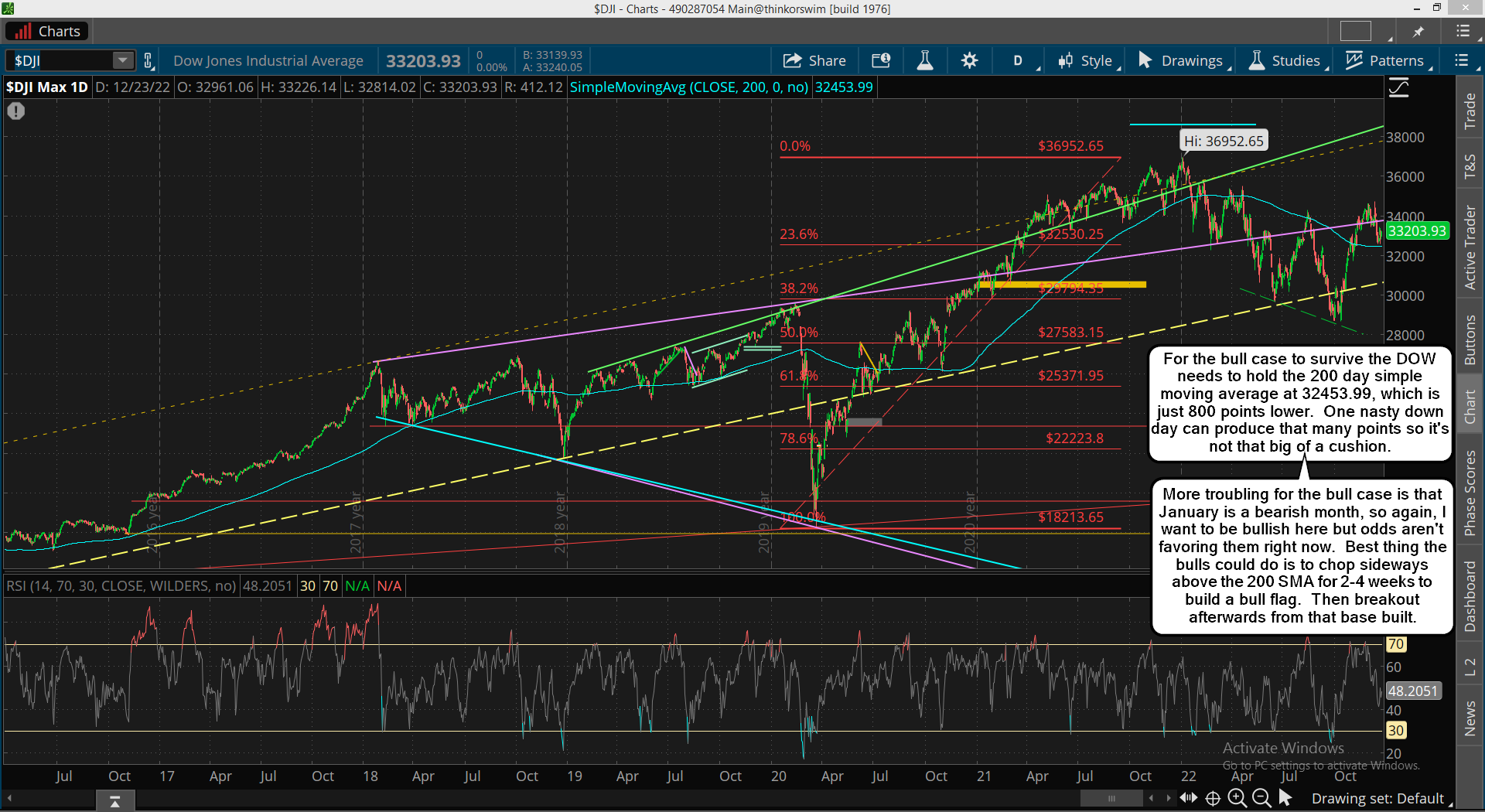 This market is either going to stay in a large range from the all time high to the October low for many more months into 2023 to form a base where a breakout to new all time highs can come later (2024?) or we'll see a large drop to flush out everyone in some flash crash like move... which can then put in a bottom where a huge rally up can start and take us to new high quickly (several months... 4-8?).

That's really the only two options I see as available for the market right now. More big swings in a large range or a flush drop, as a new high is off the table right now in my opinion.

And a side note, I did a special update on Christmas that should be read.  The link is:  https://reddragonleo.com/2022/12/25/special-report-this-code-could-mark-the-coming-low/

As for this week I see where the RSI could go up more as it's around the midpoint right now.  But the MACD's are weak and up near a point where they could rollover.  This is on the 6hr chart.  The daily isn't giving any clues on the RSI but the MACD's are trying to turn back up.  But they could just as easily rollover too and go lower.  The weekly is trying to go up on the MACD's but the RSI neutral.

Overall they all look mixed too me, so we could just chop around all week and not gain much on the upside or lose much on the downside.  The monthly looks very bearish, but it's not really work focusing on for short term as it won't turn back up until months after the low is finally put in.

In summary I don't think we will go anywhere this week... not up big or down big.  The Bullish Seasonality can certainly keep the market from tanking hard but there's so much resistance overhead that I really think this is week will just be a "pause" week before another nasty drop starts next week.

Here's a chart I posted in the chatroom on Friday... 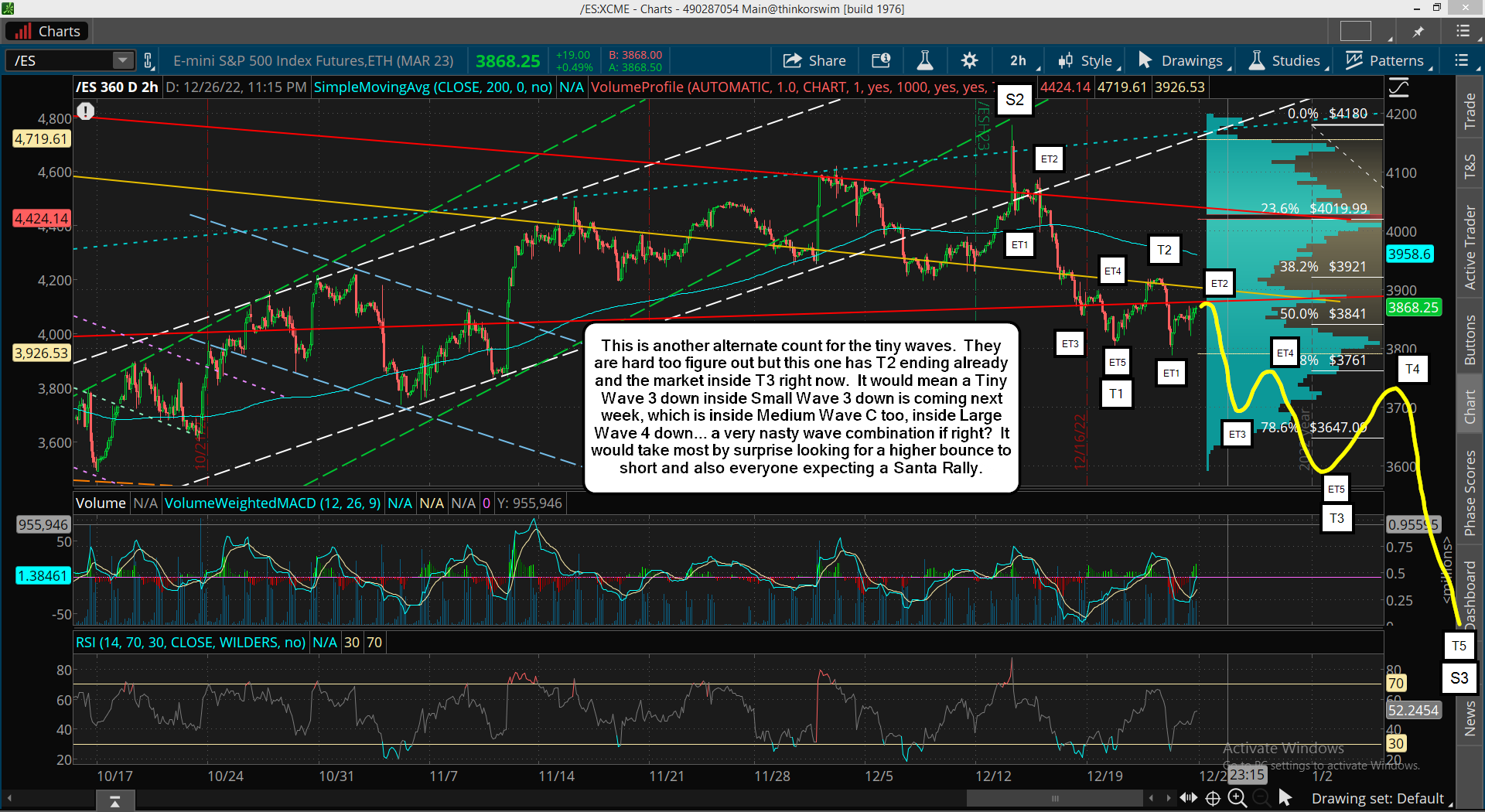 We are up at that Extra Tiny Wave 2 point right now, so if bulls can push through it then we could still be in the Tiny Wave 2 up that is subdividing into an ABC as the prior chart I posted on last Fridays morning update. 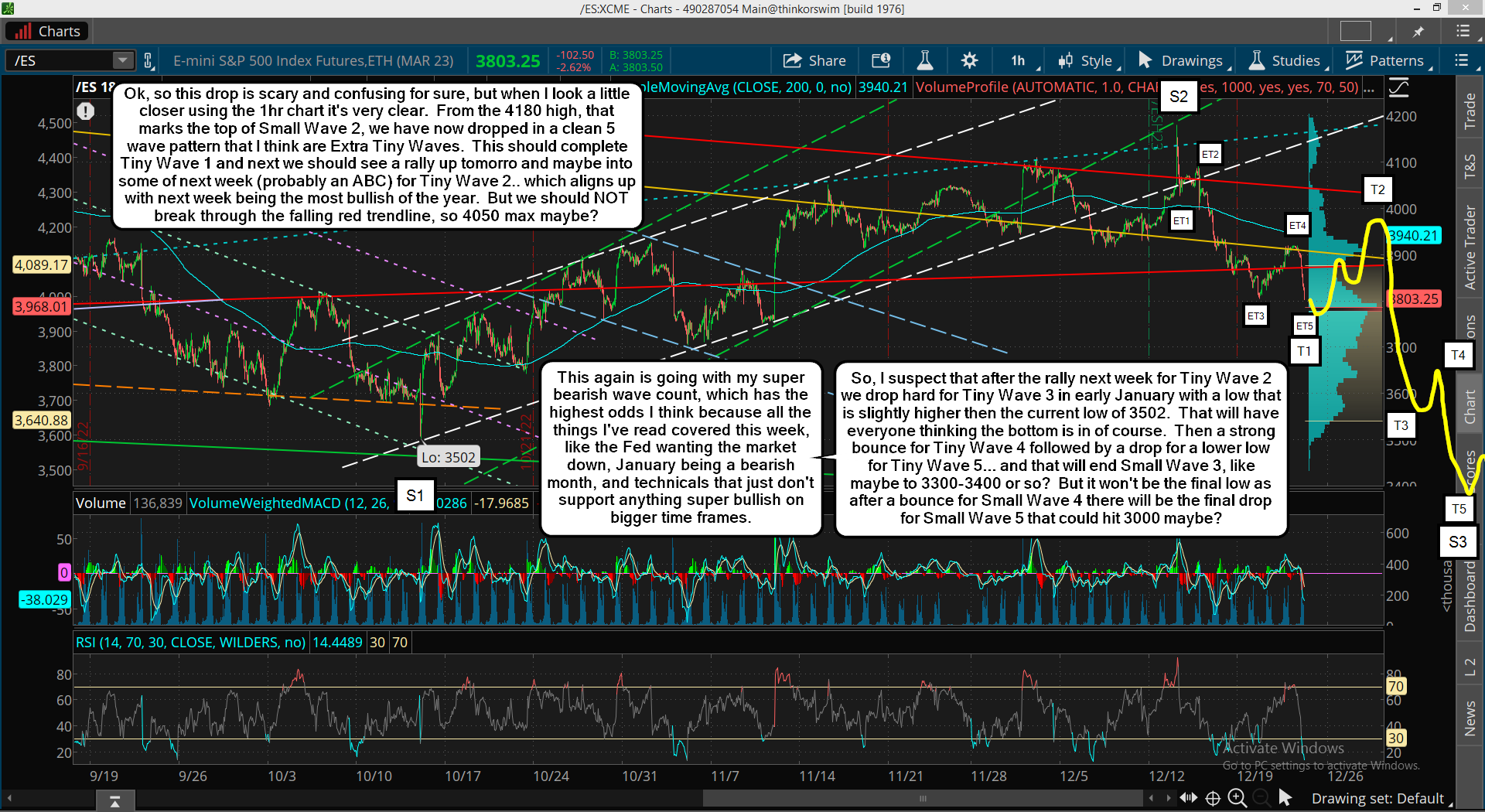 Basically you have bulls either breaking through resistance and doing another nice squeeze up to 4000+ to complete Tiny Wave 2, or a failure move like the chart I posted with Tiny Wave 2 already ending and the market being in an Extra Tiny Wave 2 up now.

Which one I don't know but bouncing around the internet and reading others I see that most are looking for the 4000+ move with different labels for the wave count but the same end result.  If only it was that easy... 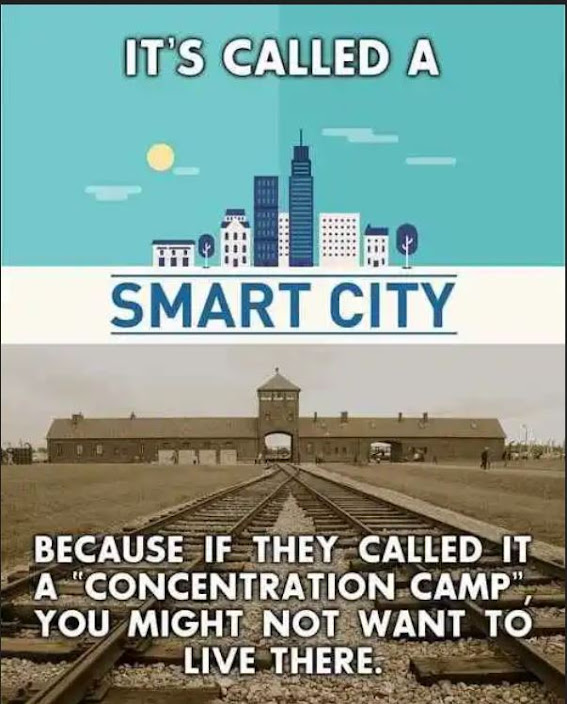