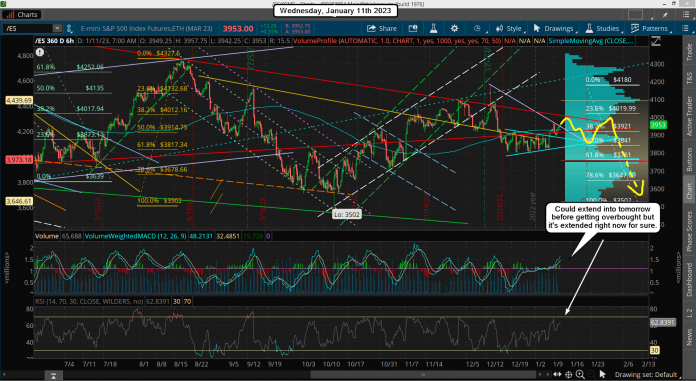 Down and up day yesterday, which is continuing this morning. We did get a pullback yesterday to 3891 in the morning, which was a perfect hit of the falling light blue trendline that makes the triangle.  That's where it bottomed and rallied up the rest of the day and into this morning where it's now hitting resistance from a falling purple trendline.

It's not overbought yet but it's certainly extended. If it stays up here all day then we'll be going into the CPI tomorrow with overbought charts. I'd then expect a drop right away or a "pop and drop" to trap longs and squeeze shorts out like the last CPI did.

We are going higher but technicals suggest another pullback is coming today, or tomorrow after the CPI. If they do the squeeze tomorrow then the 4000 level is probably the target, and it's right into the falling red trendline that has stopped all rallies since the January 2022 high.

After that we go up again to pierce through the falling red trendline at a lower level going into OPEX next week, which would be around 3990 then (tomorrow it's at 4000 roughly). That pierce should run the stops on the bears that short the hit of it tomorrow after the CPI comes out and causes a squeeze up to 4000 possibly?

It could drag out into the end of this month and right into the next FOMC meeting on February the 1st. And while anything is possible I don't think we will breakout and run to 4300 into the FOMC but I'll let the techicals tell me as we go along.

For now I think we could hit 4000 tomorrow, then sell off toward the mid-3800's where the rising light blue trendline is, and finally we rally back up into OPEX next week to 4000 again. Triangles always frustrate traders and both bulls and bears are looking for a breakout or breakdown, but neither happens in a triangle. And if we do break-through the falling red trendline next Friday that would lure in bulls looking for a run to new all time highs.

I certainly don't see that right now, but it's possibly that we run to 4300 into the end of the month to kill every last bear before the next big drop to 3000-3300. Again, I really can't figure that out until I see where the technicals are next week. If we are too overbought then odds will favor staying inside the larger triangle with the falling red trendline and rising light blue trendline.

We'd then be listening closely to the main stream media to see how much they are talking about the Fed "pivoting" at the coming FOMC meeting on February the 1st. The more they pump it the higher the odds that a breakout doesn't happen and that we stay inside the triangle.  It will all be done to lure in the retail traders (the dumb money) the insiders (smart money) will be taking short positions.

They will NOT make this easy to figure out but odds are very high that we have another drop to 3000-3300 yet to come.  Since we all know how crooked the main stream media is we show grow more and more confident that another big drop is coming the more they pump the Fed pivot.

Ok, for the short term I get the feeling they chop around today with not much more upside, nor downside.  Then tomorrow we will probably see a pop and drop after the CPI where we run up to 4000 first and then rollover.  But it's also possible that we just drop without the pop.  If so then we should find support from the rising light blue trendline in the mid-3800's.  From there we should rally back up any next week into the FOMC with 4000 as the target again.  Have a blessed day. 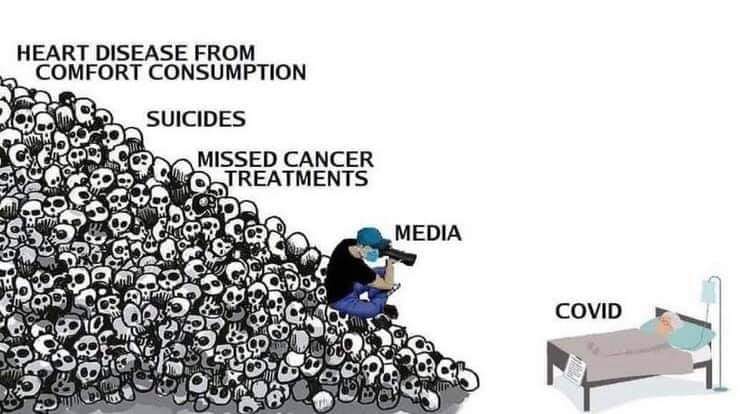