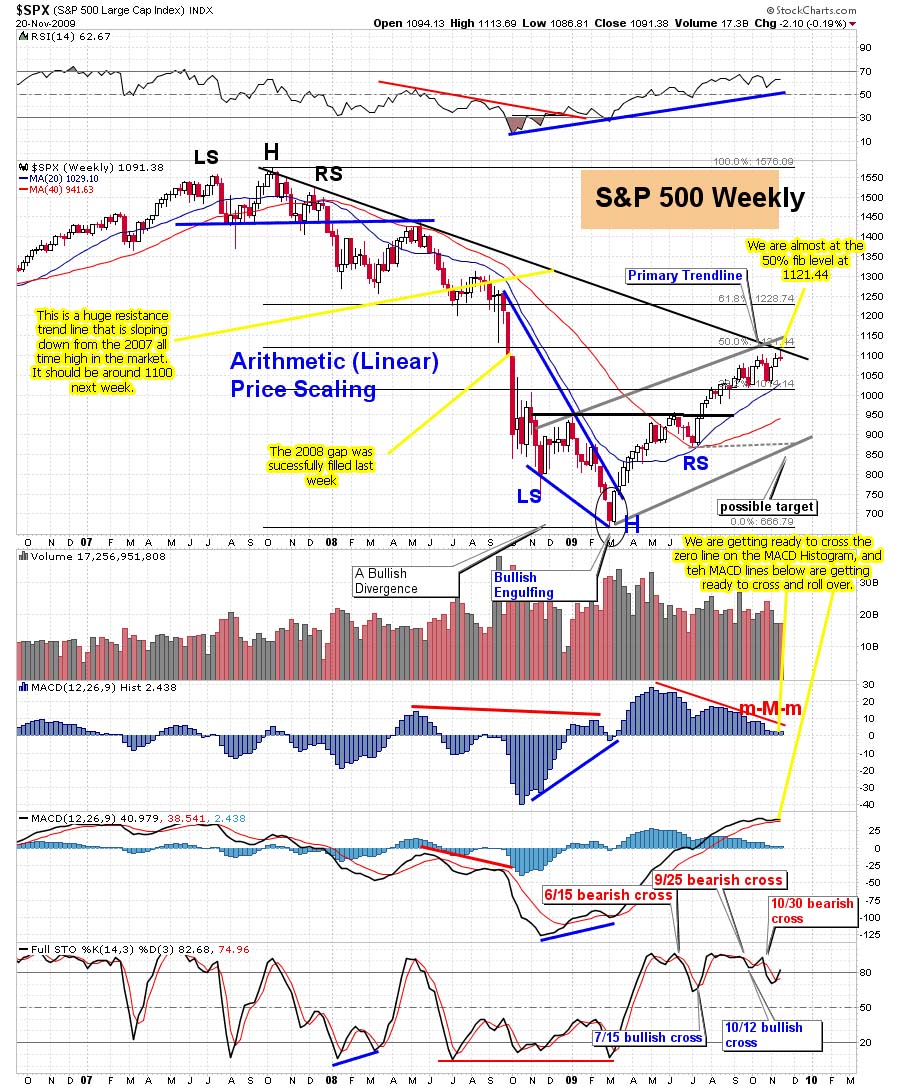 I'll start off by saying that next week should be a boring week, and preferably skipped or simply not played all together.  It's a holiday week with Thanksgiving right smack dab in the middle of the week... on a Thursday no less.  Instead of falling on a weekend date, where the trading wouldn't be too overly light, it's going to cause very light volume throughout the whole week.

So, what do we know about light volume?  It usually means an UP day... that's what.  I don't think that any of the news out next week is "market moving", meaning something that traders wait for before going long or short.  Couple that with the sell off we just had over the last few days, and you have the making of an UP week.

I believe the whole week will chop around going nowhere.  There is now some serious resistance up around the 1100 area.  You still have the "Great Wall of China" between 109.68 and 110.34 (spy) that still hasn't been "confirmed" as being pierced through.  Remember, we jumped over the entire area by a gap open on the 16th this week.

That was exactly what I said must happen if the bulls wanted to go higher to capture the 1108 spx level... which they did!  But, gaping over the area of great resistance means that the resistance is still very much intact, as they haven't went through it to break it down... so too say.  Going over it is basically cheating.

So, now that you have been caught, you are now back where you started from... under the great wall of China.  To show you how important this level now is, I want you to take a look at the chart below.  Notice that we now have a downward sloping trend line to cross, as well as the 50% fib level at 1121.44.  There is also the fact that we have now officially closed the gap from October 2008.  The only thing left to do is rally to 1121.44 for the exact 50% fib level to be reached.  However, that isn't required or necessary, as the 1113.69 high last week is technically "close enough" to be considered the 50% fib level. 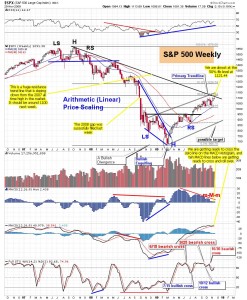 So the big question is... what is going to happen next week?  Well, I think that the light volume will allow the market to go back up and form a right shoulder as shown on the chart below.  Remember, the light volume in the holiday week coming up is one of the reasons that should allow this to happen. 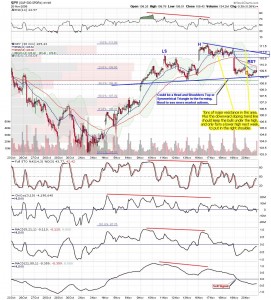 Keep in mind that a choppy/sideways market is great for day traders, but horrible for short term option swing traders.  So, how do you play this market next week... if you decide to play it at all?  Some of you might want to wait until after next week is over, and get on board the short side the following week... as I expect it to be down hard.

However, if you still want to play it then here is how I plan to do it.  I'm looking to purchase deep in the money calls on Monday, once I see that the selling has stopped and the market looks like it is forming a base.  I'm expecting Monday to be an UP day, so buying at the open is the idea.  Of course, if the futures are down hard in the morning before the open then I'll wait and re-think the position.  But, I really don't see that happening right now, as there isn't any news event that can cause more selling before the open on Monday.

Continuing on... The reason for the "deep in the money" call is to avoid the time decay that will occur as the week progress forward.  Remember, time is your enemy when buying options, but your friend when selling them.  So, a more advanced position to take would be to purchase deep in the money calls and sell at the money calls.  This is called a vertical debit call spread.  For example...

Since the closing price of the spy on Friday was 109.43 the 110 call would have 57 cents of actual value in it, and the remaining $1.35 ($1.92-$0.57) is a combination of time and volatility.  The VIX, which measures the volatility, is currently pretty low (when compared to the high last year).  So, most of that amount is time value.  Regardless, the bottom line is this....

Of the entire price of $1.92, only 29.6875% is actual value (57 cents).  That means that if the stock didn't move for the entire week the remaining $1.35 in time and volatility value would slowly erode away.  Since you sold the option instead of buying it, you would be able to benefit from the decay, as the price to buy back the option, and close the position, would be a lot less.

Now, that means that 80.54% of the value of the option is "real actual value", and the remain 19.45% is time and volitility value.  What does all this mean?  It means that as the week progresses forward, and the market goes sideways or slightly up... your option doesn't lose much value, but the one you sold did!  And that's what you want it to do, so you can buy it back at a cheaper price... and keep the difference of course.

This is really about the safest way I can think of to play a market that is going sideways or slowly up.  Time will finally be your friend, not your enemy.  Of course if the market goes down, then you will be hurt the most... but that's the risk we all take.

P.S.  Per request... here is the latest Mr. TopNotch video.  I haven't posted any as he hasn't done one since the 12th.  Anyway, here it is again.