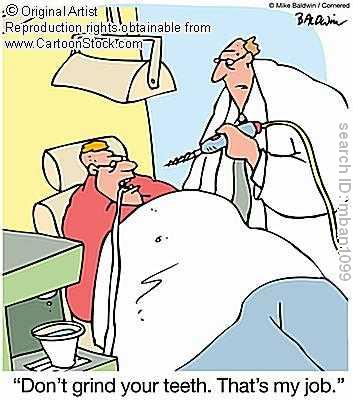 The market keeps on grinding it's way higher, as all the bears are gone (or dead), and the bulls aren't selling yet.  When will they dump the market?  When the last retail trader boards the bull train I guess?  Could we go higher?  Yes, of course we can.  Wouldn't it be poetic to top out at 116.66 spy, just like we bottomed at 666 spx.  Games people play... you got to love the irony.

Here's something that's funny.  Notice in the chart below that we actually bottomed out at 104.58 the same day the 20ma (blue line) crossed down over the 50ma (red line).  Now we are about to see the 20ma cross back above the 50ma... which is considered bullish, just like the cross down was bearish.  Yet, it seems to be too late when it crosses, as the down move was over by then.  Will the up move met the same fate? 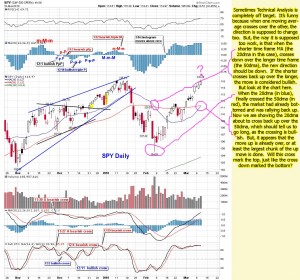 Of course I don't know the answer, but it seems too me that all this light volume slow grind higher, is designed to wear everyone out.  Let me tell you... it's working!  I'm worn out with all this crap.  And, I'm tired of writing about doom and gloom too.

I'd write about something positive if I could find some, but all the news on the economy is still bad. Cisco is coming out with a router that's supposed too be 12 times faster then standard routers.  Now that's exciting news!  Maybe I should go long on the stock now?  Yeah, and I'll long on BIDU too!  This market is so overbought that it looks like a 1,000 pound fat man.  How long can this last?  Not too much longer, as the damn is cracking.

Notice how the dollar was down today and so was gold.  Why?  Don't they usually trade the opposite direction of each other?  Yes, they do.  But, gold is a safety play too.  And when the people think that the market is safe now, and that they can make more money in stocks, they will sell gold and buy stocks... regardless of what the dollar is doing.  Now that tells me that we are so close to a top, that it's not even funny.

Add the large VIX buy on Monday, with the large sell block of Goldman on Tuesday, and today's gold action... and you have many clues that the top is in, or just a hair away from it.  Is it the final top?  I doubt it, but it should be good for a nice 5-10% correction before moving higher.  After that we could go up and tag the 50ma on the weekly chart.  Summer time is slow in the market, and that's when I'd expect a move up to that level... if it happens?

Ok, that all I can think of to say.  I'd complain some more about Goldman or how the market is extremely manipulated, but it wouldn't do any good.  Plus, Goldman isn't doing anything right now.  It's all the little retail traders that are pushing it up one dollar at a time.  And since the bears are all hibernating (or dead), the only way the market is going to fall is if the institutional bulls decide to dump their longs.  That's really what we are waiting for now. We need to see the first one sell, and then the others will join in too.

Unfortunately, we need some more bad news... really bad news, to get the selling started.  It would be easy to start a fight between all the big boys if we were in school.  We could just start a rumor about each of the baddest boys, and tell each of them that the other one said it.  They would all turn on each other, and the fighting would begin.  I remember girl's that used too do that all the time.  They did it to make the boys jealous.  Too funny it was, (and many year's ago).  If life were only that simple today...