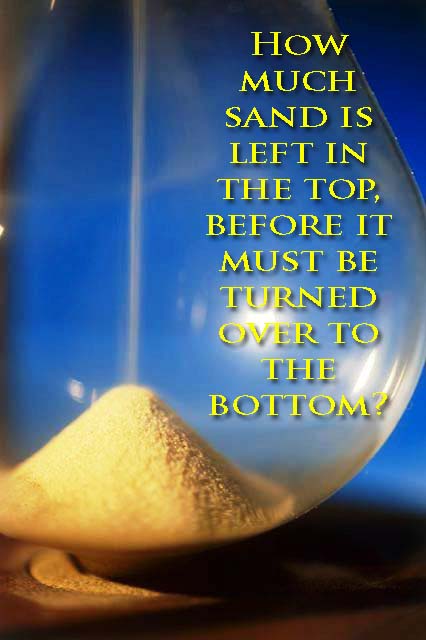 As every minute tick's by, another grain of sand falls inside the hour glass we call the Stock Market.  Eventually, the sand will all be gone and so will the rally.  But when you ask?  The only people that can answer that question are the insider's in Goldman Sachs and the Government... which are basically the same entity now anyway.

I'd love too tell my fellow bears that the market is going down hard this week, but it's not likely to happen.  That jobs report on Friday is probably horrible... which is why they didn't move it up to Thursday, or out to Monday.  They want to give the Obama Gangster Gang (OGG from now on... kinda cool, isn't it?) the long 3 day weekend to lie, steal, cheat, manipulate, fabricate, and spin the bad news into something positive, so the market won't tank on Monday.

With that said, I still think we will see some selling next week.  Don't know how much, as we might only get to 1150, and reverse back up?  Hard to say on that one.  It's again... all about volume.  Big volume equals big institutions selling... and that means we are going down further as small moves down aren't enough profit for them.  They need 5-10% corrections to make it worth their time on swing trades. 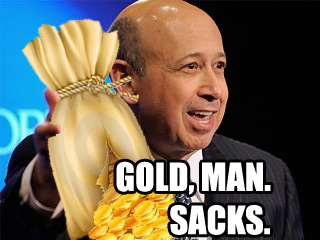 Of course they still have Hal (their top secret computer trading program) that manipulates the market up and down daily to steal money from the day traders, by front running the market.  Yes, it's illegal... but who cares?  They are doing "God's" work, and seeing what trade orders that are coming down the pipeline, just split seconds before they are executed (allowing Goldman to place their orders ahead of them, at a lower price), is perfectly OK in their eye's.

What's the big deal anyway?  Stealing a few billion dollars a year from dumb Americans who are too busy watching American Idol and Jerry Springer, isn't really a crime... now is it?  Besides, they won't miss it... just keep them high on legal drugs that the doctor prescribes for every little ache and pain they get from such a tough life of sitting in that uncomfortably arm chair... pressing buttons on the remote control, causing their fingers to go numb as they get brainwashed from the bought and paid for media telling them that it's safe now to go spend again.

Yes, my dear readers, it's now safe to go back into the market and spend your last dime on some new electronic toy like the Apple iPhone, iPad, iPod, and iUnbelievably that the public is so iStupid!  Needless to say... the market is likely to trade sideways to higher all week, and will probably hit 11,000 on the Dow.

Next week will have a lot of earnings coming out, and could be the bad news we are looking for?  But, you must understand that the OGG isn't the only one that can lie and fabricate numbers... so can the CEO's of those companies announcing earnings.

A correction down to that fake print area around 1075 spx is coming... but when?   Thinking outside the box, and trying to think like the OGG, would have me tanking the market in the summertime, and rallying into the fall/winter season.  This is the opposite of what most people are expecting.  I think we can all agree that if everyone is expecting something to happen... it won't.

So, what if we sold off in April and rallied back in May and June to put in a double top, or maybe a lower high?  Then sell off early throughout July and August... pass Stimulus package TWO in September, and rally the rest of the year.  Just trying to think like the OGG...