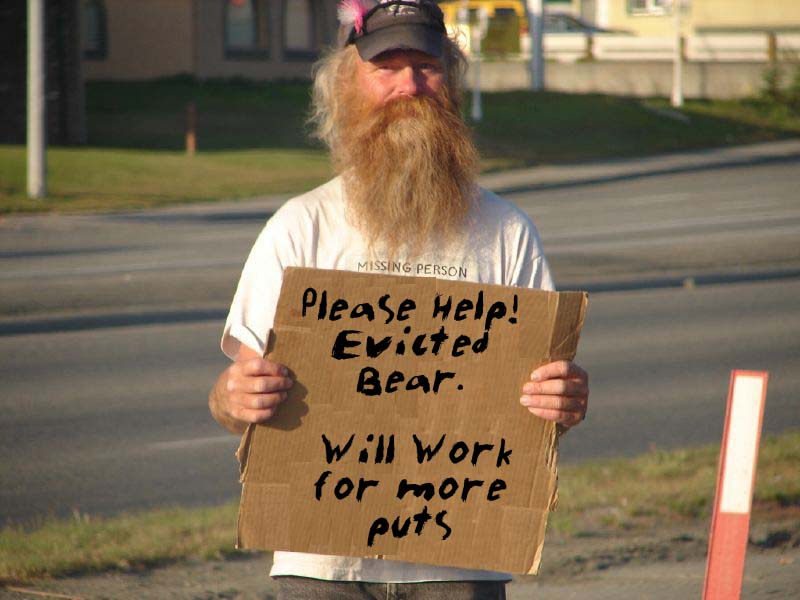 Are there any more bears left, or did they all get evicted today?

It seems there's never a dull moment in the markets, as you watched today's tape destroy the bears' dreams.  I'm glad I wasn't around for the bear beaten' today, but instead I had to actually go work.  Yes, I do work... from time to time.  Today started off too be a great day... until my car broke down, an hour from home.

Arrrrggggh!  So, I waited an hour for a tow truck, and then another hour to get back home.  Not a good day for me.  When I finally get back to the computer, I see the market squeeze more bears out, and everyone freaking out (myself including... well, just a little bit).

But gang, we all knew that the market could go up to around 1180 spx (and still can), then backtest the broken support line... we just didn't believe it could really do it!  That is what shocked all the bears, as the 1,000 point drop was so bearish for the market, that everyone was only looking for a small bounce back up, and then another crash.

I include myself in that category, as I really thought the market was done yesterday.  But, we should all know by now, that it's extremely hard to kill a bull.  If you look at this move back up using Fibonacci percentages, then we are now at about the 61.8% level, with the possibility of the move continuing to the 78.6% level around 1180 spx.  So, in the grand scheme of things, this is a typical move back up.

Will it happen tomorrow?  I don't know?  We could have another up day, to tag the 1180 broken support level first.  The sideways chop fest that we have had for the last 3 days could be a bull flag, (an ugly one... but possible?) which could give the market one more lunge higher tomorrow.

I'm still short... painfully short, but you must endure a lot of pain in the options world of trading.  Nothing is ever as easy as you plan it too be.  They are always out to surprise you, and take your money.