That ended up with a bearish reversal candle...

Looks like Monday decided to gap up instead of gap down... but in the end, the day still closed down. Days like these are tough on the bears, as there wasn't any news or volume supporting the move up. Just the typical Bullish Monday history pattern, and maybe just because they wanted to suck in more bulls, and squeeze out more bears.

So now what? Well, I certainly don't see tomorrow as an UP day, as I think it's obvious to everyone that the 60 minute chart is massively overbought, and started to roll over into the close today. So, it's not a matter of "if" tomorrow will be a down day, but more about "how much"? 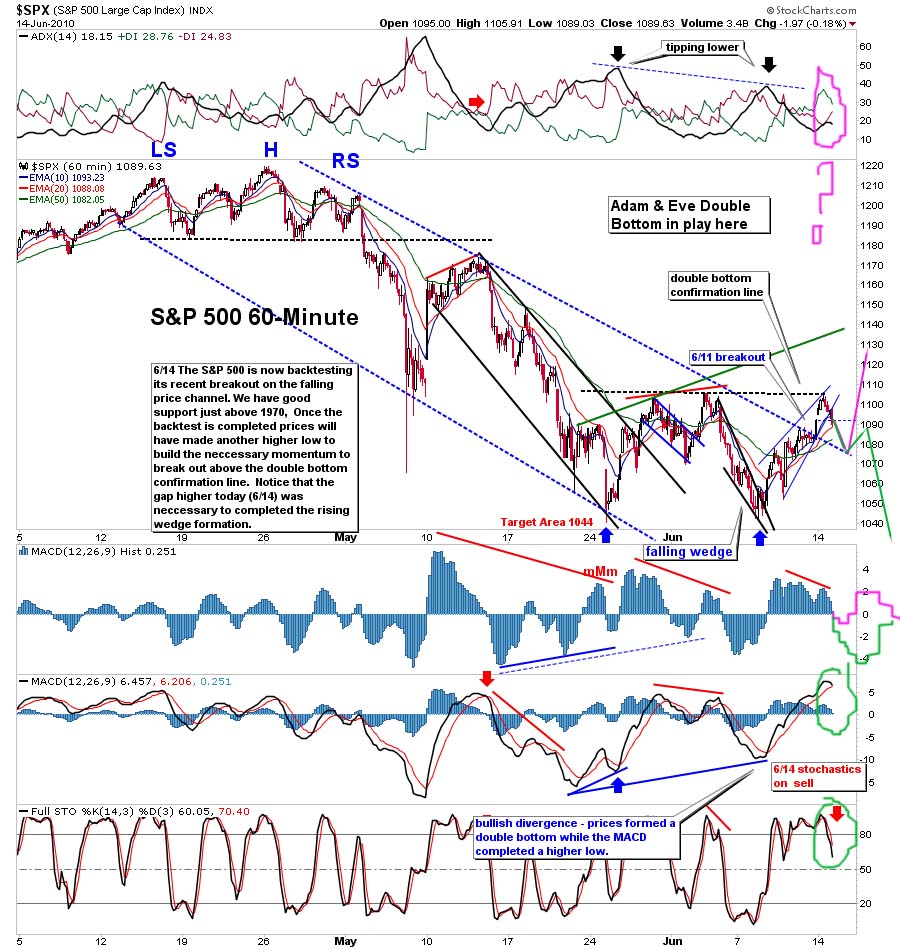 The first support going down will be around 1080, where the upper trendline will be back-tested (from the falling channel that the market just broke out of). From there, we can expect a bounce to occur... but how much?

I wish I knew? But I don't. It's really up to the daily chart now. If the daily turns back down tomorrow, then we could see a big wave 5 down... probably to that fake print of 100.72 spy. However, if the daily doesn't roll over tomorrow, then it's likely only a backtest at the 1080 trendline, and will likely go back up for a final smaller wave 5... completing between 1120-1140 spx.

Here's the thing to keep in your mind. Today was up on very light volume, with only about 80 million at 2pm on the SPY. The last 2 hours of the day moved the volume up to 207 million. That means the market still has a lot more sellers then buyers right now.

The market has hit the 1100-1105 area now 5 times since May 28th. Two choices are now in front of the market. It either has now weaken the resistance door enough that the next time it hits it, it will blasted through it to a much higher level (1120-1150?)... or, it's gave up for now as the door is too tough to breakdown at this current time.

Meaning, it will fall back down to a lower low to get more fuel (bears to squeeze) to go back up and test the door again at a later time period. The lack of news out this week leaves me guessing at to which scenario is accurate?

This truly is a "do or die" time for both the bulls and the bears. The line in the sand will be the 1080 backtest tomorrow. Of course I do expect a bounce off the trendline, but that bounce has too go back up and take out the 1100-1105 level, if the bulls want new highs.

For the bears, they want the bounce at the 1080 level to only go slightly back up to sideways, forming a bear flag, which will force the market to fall back into the falling channel again. If the bears can get the market back in the channel, then a wave 5 down will most likely be the path for the market. A new lower low would then happen.

Either way, a news event could spark heavy buying or selling? However, the lack of any news leans in favor of the bears, as they don't need large volume to fall, like the bulls new large volume to rise up and break through the door overhead.

In summary, I expect tomorrow to go down to at least 1080 spx, then bounce. From that point, we could continue down or make another run for the door overhead. The daily chart will give us clues, for if it rolls over tomorrow, then bears will likely control the tape. But if it continues moving higher, then it's likely just a backtest of the trendline, with more upside likely to follow.