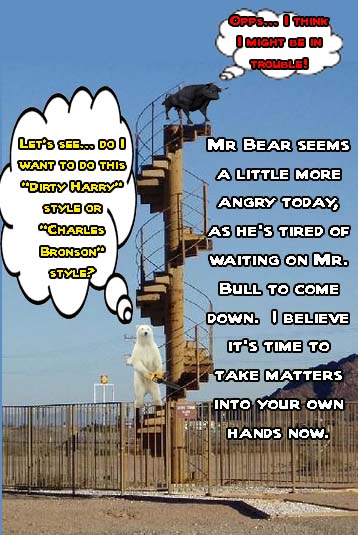 Will the bull ever come down?

Clearly this is being done to kill all the June Puts, as it has nothing to do with the news. If it did, we'd be at Dow 7,000 right now, and that would only be our first leg down. But again, the market lives in wonderland, and the rest of us live in hell. (It seems that way sometimes).

As for tomorrow, I'd tell you that I think it should crash 500 points or more, but that's about as likely as me flying to the moon at this point. We'll be lucky to get a 50 point drop (on the Dow), as this Skynet controlled market isn't going to move until next week. That's because of OPX of course... and you know those crooks aren't going to pay out any money to the bears this month.

So, with the 60 minute chart being mostly reset today, and tomorrow it will likely move back into positive territory, I'd stay we are going higher next week (wink wink). Are you reading this post Skynet? I'm uber bullish now... Dow 12,000 next week! Come on and give it too me you f@%king Bit@h from Hell...

Well, I guess I made my point on how I feel right now. No big long post, as what can I say that hasn't already been said? We all feel the same way... stunned, amazed, confused, upset, angry... did I leave anything out?

My forecast for tomorrow... more of the same B.S.

P.S. I would like to see at least 50 different peoples' opinion the polls I put up. Please take the time to vote. Thanks...