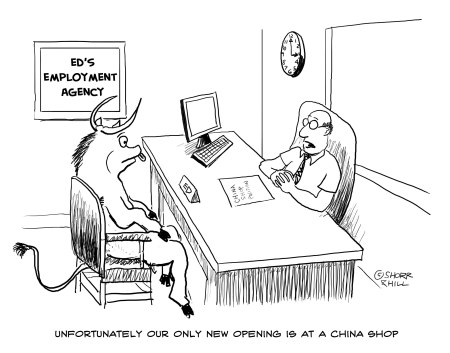 Unemployment is tough for the bulls it seems…

Today sold off again, for the 4th day in a row. Will it ever end, or has the bottom been found now? I’m not sure, as every chart I look at still seems bearish, with the exception of the 60 minute chart. Well, it’s only half bullish, as the histogram bars are rising up from oversold territory, and should cross the zero mark tomorrow.

But, the MACD still has turned back up on it, so it’s also a little bearish too. I think I’ve been waiting for so long for this moment to happen, that I don’t believe it’s actually here. I keep looking for a big short squeeze rally, to wipe out the bears again… but it hasn’t happened yet?

Maybe they are now torturing the bulls, by not letting them out of their longs? I don’t know, but I still have to stay that I expect more selling tomorrow too. Yes, it will be 5 days in a row, and a relief rally (aka… short squeeze, as in “relief for the bulls”) is overdue now.

However, the trend is now down… at least the short term trend. Longer term is yet unknown? Have we finally finished the Primary Wave 2 up, and are now in P3 down? I don’t know yet, but I do believe that if we continue down tomorrow, there won’t be any right shoulder around 1150 forming.

It’s too obvious now, as everyone sees it. So, I’m going with the charts… and they say we have more downside coming tomorrow. No big long post here, as I believe everyone can read the charts as well as I can by now. I can’t think of any reason to rally tomorrow, as I don’t think there is any major “market moving” news out… and the technicals are still point down.

So, just hang in there bears, as I believe another large leg down is coming. Keep in mind that Newbear posted that RationalNational (Rati) seen another fake print of 100.72 spy while in Anna’s chatroom. I have the same print, but I captured it on June the 4th. Should we tank hard tomorrow… I’d be looking for that print to be hit. There’s a reason it was put out on June the 4th, and again today… and that’s because they plan to go there soon.

Best of luck to us all gang...