A Southwest Airlines plane sits outside a hangar Sept. 8, 2014, after an event at Love Field in Dallas.(Photo: AP)

Cheap fuel has allowed the airlines to reward shareholders with stock buybacks and dividends, and to thank workers with profit sharing. They're also buying planes to update their fleets.

“This was by far our best year for earnings in the company’s history,” Southwest Airlines CEO Gary Kelly told reporters during a conference call, crediting low fuel prices, full planes and more seats to fill with fliers. “The convergence of all of these things made 2015 a very successful year.”

Airlines are reporting record profits —at least since Congress deregulated the industry in 1978.  A glut of oil that's led to low fuel prices is helping.

Cheap fuel may continue to be a boon for airlines, at least in the near-term. Southwest expects fuel costs to drop another 30 cents per gallon during January, February and March.

"On the cost side, we continue to benefit from significantly lower jet fuel prices and our fleet modernization,” Kelly said.

Southwest said profits nearly tripled in the fourth quarter to $536 million.  In 2015, the airline returned $1.4 billion to shareholders through dividends and share buybacks. Kelly said the company expects to buy back an additional $500 million in stock in 2016.

To reward workers on the “exceptional” results, Southwest distributed $620 million in profit sharing last year, up from the previous record of $355 million in 2014.

Alaska Airlines shared a similar story with investors. Profits rose 29% in the fourth quarter, partly owing to lower fuel costs. Total fuel cost of $213 million for October, November and December, and $954 million for the year, was one-third lower than in 2014. The carrier also increased passenger revenues by 6% in the quarter, to nearly $1.2 billion.

"We're operating safely and on time, our customer satisfaction ratings remain strong, our customer base is growing at a record pace, and our costs and fares are coming down - all a result of the hard work and dedication of our employees,” CEO Brad Tilden said in a statement.

The company announced a 38% increase in its quarterly dividend, to 27.5 cents per share and it awarded a company record $120 million in incentive pay to workers last year, or more than one month’s pay for most employees.

While Southwest and Alaska are enjoying the benefits of lower fuel prices, United Continental is feeling some pressure.

Lower oil prices fueled a sharp decline in operating expenses, which fell 8.4% to $8 billion for the quarter, compared to a year earlier. But the airline, with a major hub in Houston, where many energy industry executives are based, said high energy prices have led to a decline in corporate travel. In response, Jim Compton, vice chairman and chief revenue officer for United said the company would reduce capacity in Houston and shift it to  "other growing markets like Denver and San Francisco."

United is battling other issues. During the quarter CEO Oscar Munoz was sidelined by a health crisis. Munoz had a heart attack in October and underwent a heart transplant in early January. Revenue fell 3% in the quarter.

In a surprise, Munoz appeared on a conference call Thursday with investors and media, saying he is steadily increasing his participation in company activities.

"I am certainly darn glad to be here," Munoz said. "I certainly will be back full-time by the end of the first quarter, if not sooner."

Munoz took office in September after a period of chronic delays and computer issues for United, which was ranked as the ninth of 10 North American airlines for on-time performance.

"We are working extremely hard to become the consistently reliable airline our customers can depend on," Brett Hart, acting CEO of United, told investors on Thursday. 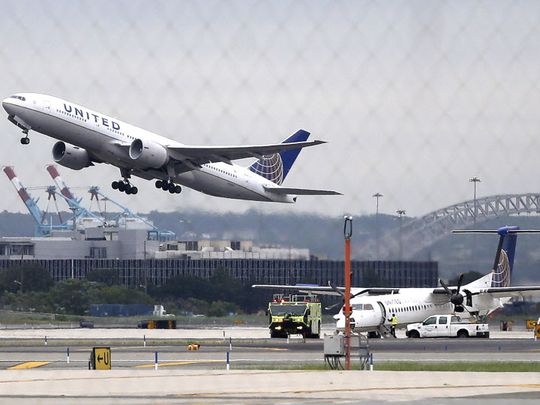 Despite its challenges and lower revenue performance, United was able to increase fourth quarter net income to $823 million from $28 million. United workers enjoyed $698 million in profit-sharing for the year.

United announced it would buy 40 new Boeing 737-700 aircraft to enter the fleet in mid-2017. The goal is to reduce its reliance on 50-seat aircraft that are less profitable.

Southwest said its delivery schedule includes 33 737-800s and the conversion of 25 737-700s to 737-800s. The wifi-equipped planes will replace existing capacity of the airline’s classic fleet by mid-2018, three years faster than previously expected. Alaska added 11 737-900ERs and one Bombardier Q400 last year.