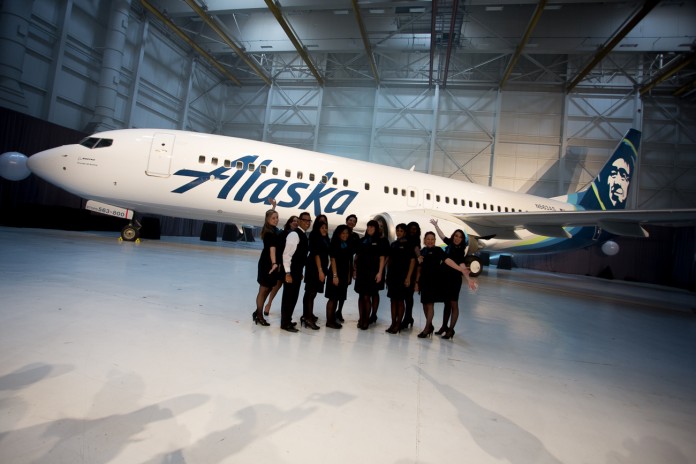 SEATTLE -- As part of a broad brand update, Alaska Airlines on Monday unveiled a makeover for the company’s logo and iconic Eskimo face that has been on the tail of the carrier’s airplane fleet since the early 1970s.

“We’ve grown tremendously over the past 5 years, adding 90 new markets and 26 new cities, and as we get bigger and go to all to all these new places, we needed a brand identity that was fresh, modern, relevant, but also reflected who were are on the inside,” Sangita Woerner, Alaska’s vice president of marketing, told Today in the Sky.

The change to the logo -- or wordmark is subtle. Basically, it's a streamlining of the capital “A” in Alaska and an overall bolding of the font. Modifications to the Eskimo face are more noticeable and were made, in part, to allow the image to show up better online and on mobile devices.

“The face is essentially the same, but we cleaned up some of the lines,” said Woerner. “We wanted to make sure he was recognizable and that people could still the warmth and kindness in his face.”

To add energy to the image and better reflect all the places Alaska Airlines now flies, the carrier added colors to the fur lining of the Eskimo’s

Crews pose with a Boeing 737 painted in Alaska Airlines' updated paint scheme ahead of the official reveal on Jan. 25, 2016. (Photo: Jeremy Dwyer-Lindgren, Special for USA TODAY)

parka. And those colors have descriptive names to denote the places Alaska flies and the feelings the carrier hopes the image evokes: “tropical green” for destinations such as Hawaii and Costa Rica and “breeze, midnight, atlas and calm” for the flying experience.

“It’s not a revolution, it’s an evolution, is what our customers told us in focus groups,” said Woerner.

The Eskimo face first appeared on the tails of Alaska Airlines' airplanes in 1972. Back then  the company had a four-logo paint scheme that included a totem pole, a gold miner, Russian spires (to represent early Russian heritage in Alaska) and a native Alaskan in a fur-lined parka.

The Eskimo became the fleet-wide tail logo in 1976, although in 1988 the carrier considered moving away from the Eskimo to a mountain scene on the tail. That plan was put aside after residents of Alaska objected.

“There was such a sense of pride and commitment, that we decided to keep him and have never wavered from that,” said Woerner.

The first plane with the new wordmark, Eskimo face and refreshed paint theme was introduced Monday afternoon at a meeting of more than 1,800 Alaska Airlines employees in the carrier’s Seattle hangar.

By the end of 2016, more than 40 planes will be painted with the new livery design, including 18 new planes due from Boeing. The rest will get repainted as part of the regular maintenance schedule, said Woerner, “so it will take a few years to get the entire fleet repainted.”

Alaska’s new branding went live Monday afternoon on the airline’s website and mobile app. Passengers traveling through Seattle-Tacoma International Airport on Tuesday morning will see updated branding at Alaska’s gates and in the lobby area. By the end of 2016, the new branding should be in the more than 100 airports where Alaska has operations.

The new branding will be applied to the in-flight magazine, safety cards, menus, food packaging, luggage tags and other items beginning in February.

This spring, Alaska Airlines' elite-level Mileage Plan members will get new cards that reflect the new branding. Woerner also said that “close to the summer” Alaska will change the name of the lounges in Seattle, Portland, Anchorage and Los Angeles from the Board Room to the Alaska Lounge.

Harriet Baskas is a Seattle-based airports and aviation writer and USA TODAY Travel's "At the Airport" columnist. She occasionally contributes to Ben Mutzabaugh's Today in the Sky blog. Follow her at twitter.com/hbaskas.