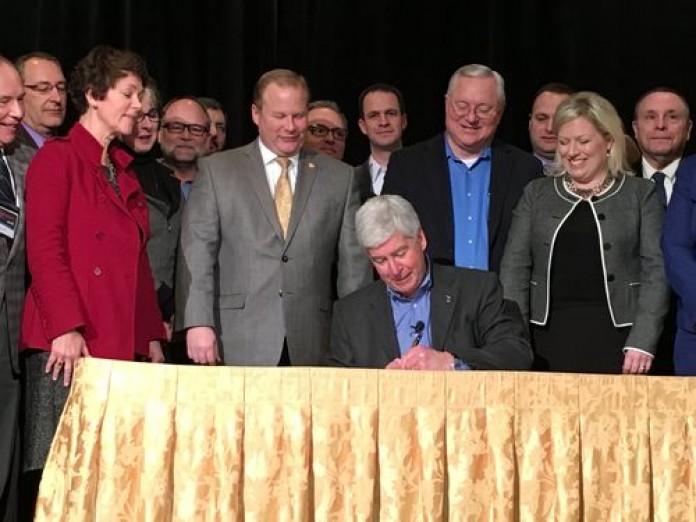 But, he said, it's impossible to predict because it's not a question of time, but of science.

"It's not based on time," Snyder said after a luncheon speech at the annual convention of the Michigan Press Association in Grand Rapids. "It's going to be based on tests and science and people believing, including outside experts, that it's safe to drink."

Snyder said comments he made on Detroit radio Friday morning, in which he said he hoped the Flint water could be safe to drink in three months, may have been taken out of context.

A large number of state lawmakers joined Snyder at the luncheon to watch him sign a $28 million supplemental appropriation bill for Flint, which Snyder has described as only one step in addressing the public health and infrastructure catastrophe.

Flint's drinking water became contaminated with lead in April 2014 after the city, while under the control of a state-appointed emergency manager, temporarily switched from Lake Huron water treated by the Detroit Water and Sewerage Department to water from the Flint River, treated at the Flint water treatment plant.

State Department of Environmental Quality Director Dan Wyant resigned in December after acknowledging the DEQ failed to require the addition of needed corrosion-control chemicals to the corrosive Flint River water. As a result, lead leached from pipes, joints and fixtures, contaminating the drinking water for an unknown number of Flint households. Lead causes permanent brain damage in children, as well as other health problems.

For months, state officials downplayed reports of lead in the water and a spike in the lead levels in the blood of Flint children before acknowledging a problem Oct. 1. Since then, Snyder has faced repeated questions about when he first knew there was too much lead in Flint's drinking water.

Snyder has said the buck stops with him on the Flint water issue, but said again Friday the disaster happened because of mistakes at the local, state and federal level and his focus is on fixing things, not assessing blame.

Some critics have linked the Flint problem with a lack of transparency in the Snyder administration, since Flint residents who were drinking the contaminated water were not aware of emails and reports that were being sent back and forth between state departments and the U.S Environmental Protection Association on the issue.

Snyder made no commitments when asked if he favored extending the Michigan Freedom of Information Act to cover records in the governor's office and the Legislature. He said he is looking at broader transparency issues.

"That is an active topic," Snyder said. "We're going to be working on how to enhance transparency with my legislative partners."