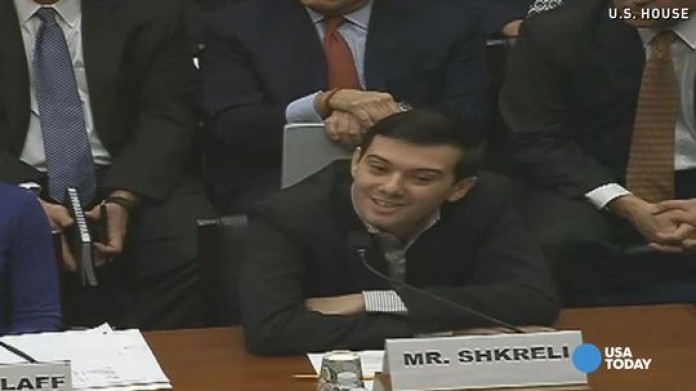 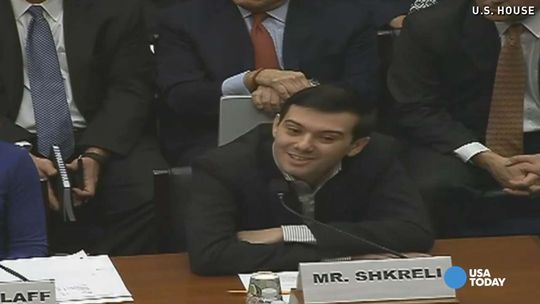 Drug executive Martin Shkreli, who vigorously defends his decision to hike the price of a life-saving drug, went silent and smirked as he appeared at a Congressional hearing on Thursday.
VPC

Embattled drug entrepreneur Martin Shkreli — who vigorously defended his decision to hike the price of a life-saving drug from $13.50 to $750 — suddenly went silent Thursday at a Congressional committee, smirking and grinning instead of answering questions.

Members of Congress launched into fiery lectures directed at Shkreli, whose previous company, Turing Pharmaceuticals, came under scrutiny when it raised the price of Daraprim more than 5,000%.

"Drug company executives are lining their pockets at the expense of some of the most vulnerable families in our nation," U.S. Rep. Elijah Cummings, D-Maryland, said. "It's not funny, Mr. Shkreli. People are dying and they're getting sicker and sicker."

The boyish-faced Shkreli sat quietly at the witness table, clasping his hands tightly and slowly rubbing his fingers together as he was lectured. He smirked several times and appeared on the verge of laughter at one point when Cummings was speaking.

After the hearing, he removed any doubt about his feelings.

"Hard to accept that these imbeciles represent the people in our government," Shkreli said on Twitter, where he proceeded to retweet several users who posted supportive messages. 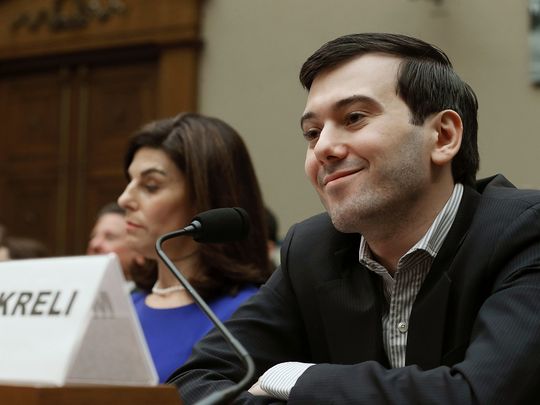 Pelted with hostile questions, Shkreli repeatedly recited a prepared statement that he would not testify on the advice of his counsel. He is facing multiple criminal securities charges over allegations that he took stock from a previous biotech company to pay off business debts and lied about the investment returns of his former hedge fund.

U.S. Rep. Trey Gowdy, R-South Carolina, professed to be flabbergasted at Shkreli's silence on drug-price-hiking issues, telling the entrepreneur that he could testify on those matters without incriminating himself.

"I intend to follow the advice of counsel, not yours," Shkreli told Gowdy.

At one point, Shkreli's attorney, Ben Brafman, stood up in the crowd and tried to intervene. But U.S. Rep. Jason Chaffetz, R-Utah, chairman of the committee, quickly rejected Brafman's efforts.

"No you are not recognized and you will be seated," Chaffetz said.

After less than an hour, Chaffetz dismissed Shkreli from the hearing since he was refusing to say anything.

In a brief press conference afterward, Brafman sought to explain Shkreli's dismissive facial expressions, saying his client was just "nervous." Shkreli did not comment during the press conference, but tweeted moments later.

In days before the hearing, he blasted Congress and made sarcastic jokes on Twitter about the subpoena he received to testify.

"I'm not going to say anything other than the 5th Amendment," he said recently. "They just want this to be a circus."

U.S. Rep. Buddy Carter, R-Georgia, the only pharmacist in Congress, said during the hearing that he supports free-market principles but was "disgusted" by drug-price-hiking companies.

"What was done here was different," Carter said. "Perverse business practices were employed."

The charismatic persona that Shkreli has cultivated — paying $2 million for the only copy of a new Wu Tang Clan album and setting up a web cam to film himself working — amplified the tension with Congress.

"People in my district are not on the Forbes billionaire list — they can’t buy Wu Tang Clan albums for $2 million," Cummings said. "Like many Americans they struggle every single month to pay for the increasing cost of housing, education and health care. They live from paycheck to paycheck and sometimes from no check to no check."

In addition to Shkreli, several other executives were also set to appear before the committee.

Howard Schiller, interim CEO of Valeant Pharmaceuticals, which has also come under fire for its business model and drug prices, cited the company's recent price-cutting deal with Walgreens as an example of its responsiveness.

"We’re listening and we’re changing," he said. "We have more to do."

Schiller pledged that any future drug price increases would be "much more modest" than the increases that enraged Congress.