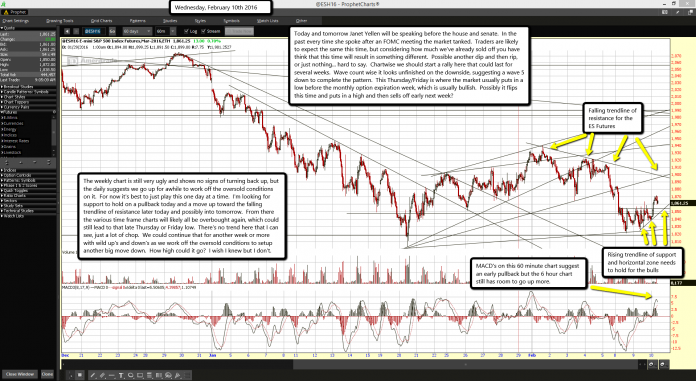 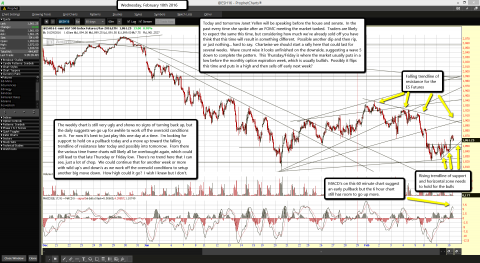 Falling trendline of resistance for the ES Futures

MACD's on this 60 minute chart suggest an early pullback but the 6 hour chart still has room to go up more.

Today and tomorrow Janet Yellen will be speaking before the house and senate.  In the past every time she spoke after an FOMC meeting the market tanked.  Traders are likely to expect the same this time, but considering how much we've already sold off you have think that this time will result in something different.  Possible another dip and then rip, or just nothing... hard to say.  Chartwise we should start a rally here that could last for several weeks.  Wave count wise it looks unfinished on the downside, suggesting a wave 5 down to complete the pattern.  This Thursday/Friday is where the market usually puts in a low before the monthly option expiration week, which is usually bullish.  Possibly it flips this time and puts in a high and then sells off early next week?

The weekly chart is still very ugly and shows no signs of turning back up, but the daily suggests we go up for awhile to work off the oversold conditions on it.  For now it's best to just play this one day at a time.  I'm looking for support to hold on a pullback today and a move up toward the falling trendline of resistance later today and possibly into tomorrow.  From there the various time frame charts will likely all be overbought again, which could still lead to that late Thursday or Friday low.  There's no trend here that I can see, just a lot of chop.  We could continue that for another week or more with wild up's and down's as we work off the oversold conditions to setup another big move down.  How high could it go?  I wish I knew but I don't.