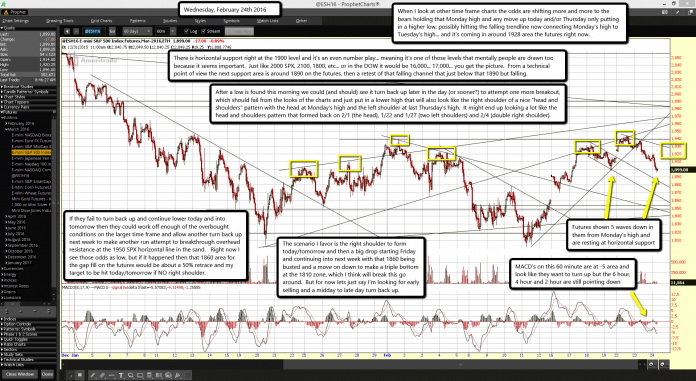 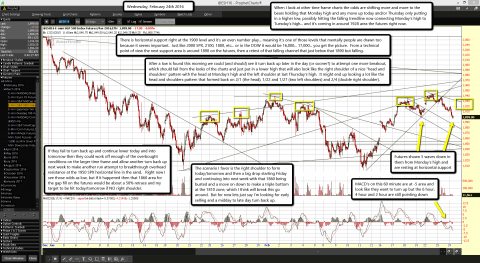 MACD's on this 60 minute are at -5 area and look like they want to turn up but the 6 hour, 4 hour and 2 hour are still pointing down

When I look at other time frame charts the odds are shifting more and more to the bears holding that Monday high and any move up today and/or Thursday only putting in a higher low, possibly hitting the falling trendline now connecting Monday's high to Tuesday's high... and it's coming in around 1928 area the futures right now.

After a low is found this morning we could (and should) see it turn back up later in the day (or sooner?) to attempt one more breakout, which should fail from the looks of the charts and just put in a lower high that will also look like the right shoulder of a nice "head and shoulders" pattern with the head at Monday's high and the left shoulder at last Thursday's high.  It might end up looking a lot like the head and shoulders pattern that formed back on 2/1 (the head), 1/22 and 1/27 (two left shoulders) and 2/4 (double right shoulder).

If they fail to turn back up and continue lower today and into tomorrow then they could work off enough of the overbought conditions on the larger time frame and allow another turn back up next week to make another run attempt to breakthrough overhead resistance at the 1950 SPX horizontal line in the sand.   Right now I see those odds as low, but if it happened then that 1860 area for the gap fill on the futures would be about a 50% retrace and my target to be hit today/tomorrow if NO right shoulder.

The scenario I favor is the right shoulder to form today/tomorrow and then a big drop starting Friday and continuing into next week with that 1860 being busted and a move on down to make a triple bottom at the 1810 zone, which I think will break this go around.  But for now lets just say I'm looking for early selling and a midday to late day turn back up.