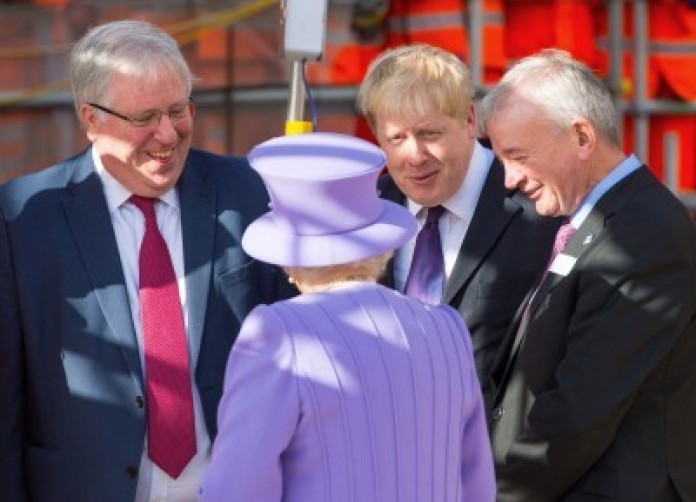 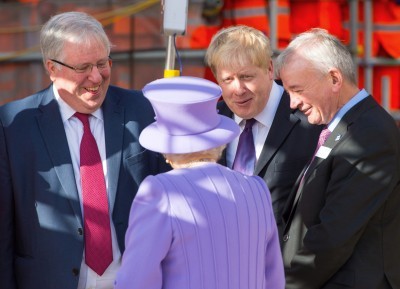 Britian’s Queen Elizabeth II, centre, talks to Transport Secretary Patrick McLoughlin, left, and Mayor of London Boris Johnson, centre, during a royal visit to the construction site of the new Bond Street Crossrail Station in central London, Tuesday Feb. 23, 2016. The Queen is scheduled to tour the Crossrail project which will provide new links through new tunnels under Central London, opening in 2018, (Dominic Lipinski / PA via AP) UNITED KINGDOM OUT - NO SALES - NO ARCHIVES (Associated Press)

LONDON — A new rail line under London is to be named in honor of Queen Elizabeth II.

Developers say the project known as Crosssrail will be named the Elizabeth Line when it opens in December 2018. When it is finished, the line will run for more than 60 miles (100 kilometers) from east to west, including a 13-mile (21-kilometer) underground stretch through London.

The monarch, who turns 90 in April, unveiled a sign with the purple “Elizabeth Line” logo on a visit to a Crossrail tunnel on Tuesday.

Several London transit lines already have royal connections. The Jubilee subway line was named in honor of Elizabeth’s Silver Jubilee marking 25 years on the throne in 1977, while the Victoria Line and Victoria railway station are named after Queen Victoria.