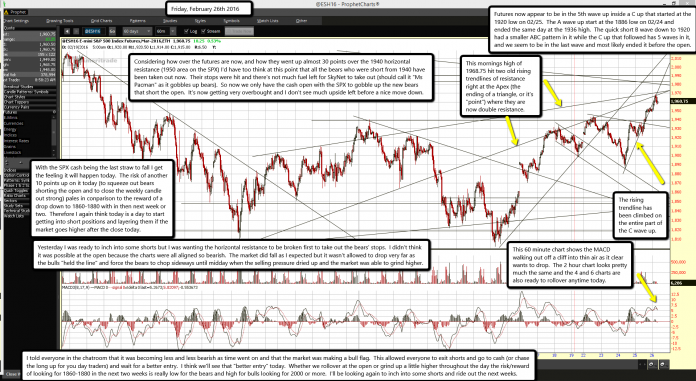 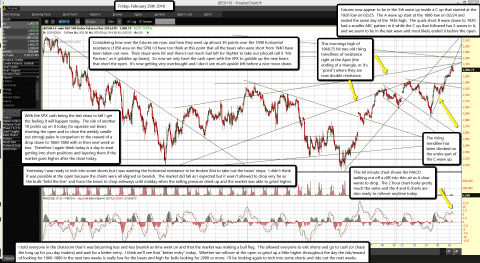 The rising trendline has been climbed on the entire part of the C wave up.

This mornings high of 1968.75 hit two old rising trendlines of resistance right at the Apex (the ending of a triangle, or it's "point") where they are now double resistance.

This 60 minute chart shows the MACD walking out off a cliff into thin air as it clear wants to drop.  The 2 hour chart looks pretty much the same and the 4 and 6 charts are also ready to rollover anytime today.

Considering how over the futures are now, and how they went up almost 30 points over the 1940 horizontal resistance (1950 area on the SPX) I'd have too think at this point that all the bears who were short from 1940 have been taken out now.  Their stops were hit and there's not much fuel left for SkyNet to take out (should call it "Ms Pacman" as it gobbles up bears).  So now we only have the cash open with the SPX to gobble up the new bears that short the open.  It's now getting very overbought and I don't see much upside left before a nice move down.

With the SPX cash being the last straw to fall I get the feeling it will happen today.  The risk of another 10 points up on it today (to squeeze out bears shorting the open and to close the weekly candle out strong) pales in comparison to the reward of a drop down to 1860-1880 with in then next week or two.  Therefore I again think today is a day to start getting into short positions and layering them if the market goes higher after the close today.

Yesterday I was ready to inch into some shorts but I was wanting the horizontal resistance to be broken first to take out the bears' stops.  I didn't think it was possible at the open because the charts were all aligned so bearish.  The market did fall as I expected but it wasn't allowed to drop very far as the bulls "held the line" and force the bears to chop sideways until midday when the selling pressure dried up and the market was able to grind higher.

I told everyone in the chatroom that it was becoming less and less bearish as time went on and that the market was making a bull flag.  This allowed everyone to exit shorts and go to cash (or chase the long up for you day traders) and wait for a better entry.  I think we'll see that "better entry" today.  Whether we rollover at the open or grind up a little higher throughout the day the risk/reward of looking for 1860-1880 in the next two weeks is really low for the bears and high for bulls looking for 2000 or more.  I'll be looking again to inch into some shorts and ride out the next weeks.