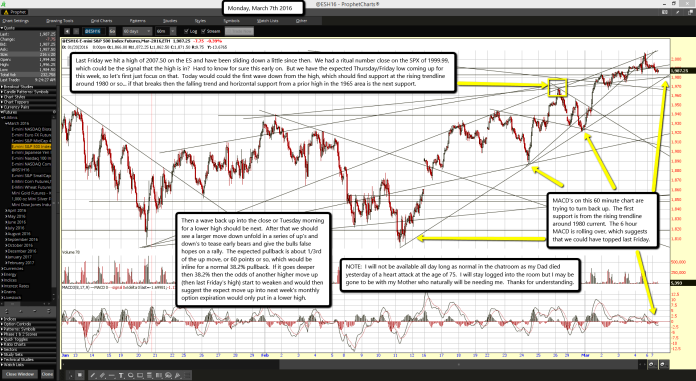 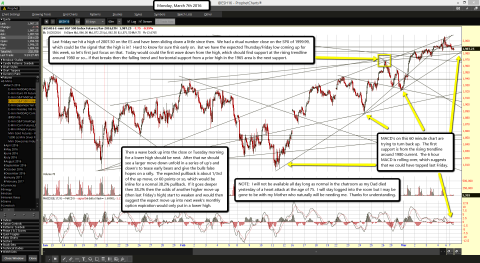 MACD's on this 60 minute chart are trying to turn back up.  The first support is from the rising trendline around 1980 current.  The 6 hour MACD is rolling over, which suggests that we could have topped last Friday.

Last Friday we hit a high of 2007.50 on the ES and have been sliding down a little since then.  We had a ritual number close on the SPX of 1999.99, which could be the signal that the high is in?  Hard to know for sure this early on.  But we have the expected Thursday/Friday low coming up for this week, so let's first just focus on that.  Today would could the first wave down from the high, which should find support at the rising trendline around 1980 or so... if that breaks then the falling trend and horizontal support from a prior high in the 1965 area is the next support.

Then a wave back up into the close or Tuesday morning for a lower high should be next.  After that we should see a larger move down unfold in a series of up's and down's to tease early bears and give the bulls false hopes on a rally.  The expected pullback is about 1/3rd of the up move, or 60 points or so, which would be inline for a normal 38.2% pullback.  If it goes deeper then 38.2% then the odds of another higher move up (then last Friday's high) start to weaken and would then suggest the expect move up into next week's monthly option expiration would only put in a lower high.

NOTE:  I will not be available all day long as normal in the chatroom as my Dad died yesterday of a heart attack at the age of 75.  I will stay logged into the room but I may be gone to be with my Mother who naturally will be needing me.  Thanks for understanding.