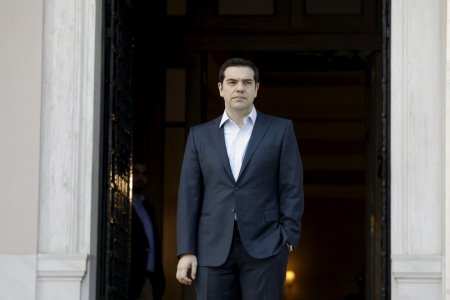 The leaking of a conference call of International Monetary Fund officials on Greece's latest bailout review has further undermined mutual trust in fraught debt talks, embarrassed the European Commission and infuriated the IMF and Germany.

At stake are the IMF's reputation as a stern enforcer of financial rescue programs meant to make indebted states viable and the European Union's determination to hold the euro zone together and avert another damaging Greek crisis.

Greek Prime Minister Alexis Tsipras exploited the leak at home to demonize the IMF, rally his left-wing Syriza party ahead of more painful sacrifices to secure the next slice of European loans, and try to put his conservative opponents in a corner.

But efforts to drive a wedge between the EU institutions and the IMF, and isolate IMF Europe director Paul Thomsen, a veteran of six years of acrimonious negotiations with Athens, fell flat.

"Each time Tsipras is going to have to compromise, he needs to create an external enemy," said George Pagoulatos, professor of European politics and economy at Athens University. "It's part of his old populist playbook.

"It's smart domestic politics even if it is dumb diplomacy."

After a transcript of the March 19 conversation was posted on Internet site WikiLeaks, Tsipras demanded the IMF explain whether it was plotting to push Greece to the brink of default to make it swallow harsher austerity measures. The text offers little support for such accusations, although the IMF officials do note that Athens only compromises when it runs out of money.

IMF Managing Director Christine Lagarde made clear whom she held responsible, backing her staff and writing to Tsipras: "It is critical that your authorities ensure an environment that respects the privacy of their internal discussions and take all necessary steps to guarantee their personal safety."

The leak highlighted known differences between the IMF and the EU over the state of Greece's third international bailout since 2010, and over how much more Athens needs to do to meet its fiscal targets and make its debt sustainable.

More damagingly, it laid bare the IMF staff's contempt for the European Commission, seen as too soft on the Greeks.

It undercut months of patient efforts by Tsipras and Finance Minister Euclid Tsakalotos to rebuild lenders' trust after the havoc wrought by former Finance Minister Yanis Varoufakis, who sparred acrimoniously with his euro zone colleagues and leaked documents to try to bounce them into concessions.

It also shone a light on a complex, three-dimensional chess game the IMF is playing to try to make Greece accept painful reforms of pensions, taxation and bad loans while pressuring Germany and its allies to grant Athens substantial debt relief.

Put simply, the IMF's position is that the Greek economy is in worse shape than rosy EU forecasts suggest, and that a necessary relaxation of fiscal targets must be balanced by greater debt relief from euro zone lenders.

Since the Europeans refuse an outright debt write-off, known as a "haircut", they will have to stretch out loan maturities for decades and give Athens a 20-year debt service holiday.

Otherwise the numbers won't add up and the program is headed for failure, the IMF says.

"The bottom line is the debt will not be repaid in our lifetime," said Jacob Kirkegaard, senior fellow at the Peterson Institute for International Economics in Washington.

"The IMF is gearing up for new clients in the emerging economies. That is not best done by being soft on Greece. They won't go to the (IMF) board to approve participation in a third Greek bailout without something they think is tough and credible," he said.

Brussels contends that both the economy and Greek compliance with the bailout program are better than the IMF thinks, hence the first review should be concluded soon, allowing Athens to access the next 5 billion euros ($5.70 billion) of loans.

In the transcript, IMF Greece mission chief Delia Velculescu complains that the Commission agrees on joint positions only to back down to the Greeks the next day, giving Athens no incentive to make tough reforms.

Thomsen belittles tax increases proposed by Greece to plug the fiscal gap as "Mickey Mouse stuff". He also suggests German Chancellor Angela Merkel should be made to choose between giving Athens substantial debt relief or seeing the IMF pull out.

Germany, the biggest creditor, is the most reluctant about major debt restructuring. Its parliament insists on a continued IMF presence to enforce budget savings and minimize the need for stretching out loans and freezing interest payments.

How the three-way tug-of-war between the IMF, Greece and Berlin will play out remains uncertain. The sequencing will be tricky, but no side seems to have an interest in walking away.

The Germans are more dependent now on Greece to act as Europe's gatekeeper than they were during last year's crisis over a possible "Grexit" from the euro zone. Berlin needs Athens' cooperation to process and detain migrants and refugees until they can be send back to Turkey.

The Tsipras government has spent much political capital to keep Greece in the euro zone and reach the long sought debt relief negotiations. It cannot afford to alienate the lenders.

And the IMF too does not want to abandon Greece as a black mark on its record.

"Four of the five euro zone bailouts have gone pretty well - an 80 percent success rate. Yet if the IMF walks away from Greece now, everything they've done in Europe will be remembered as a failure," said Kirkegaard.