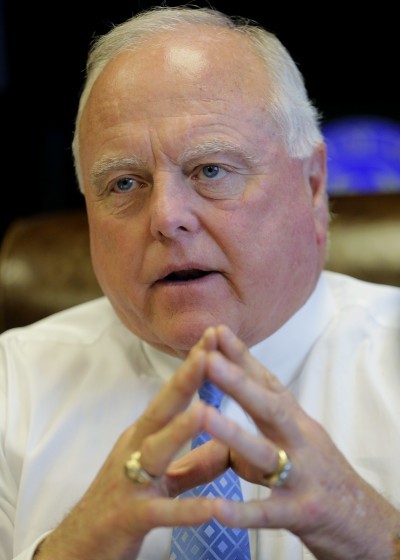 FILE - In this June 18, 2015 file photo, Texas Agricultural Commissioner Sid Miller talks about the state’s plans to repeal a decade-old ban on deep fryers in public school kitchens, in Austin, Texas. Attorney General Ken Paxton has been indicted for allegedly duping investors in a tech startup, and Miller reportedly used tax dollars to travel to obtain a so-called “Jesus shot” supposedly offering long-term relief from pain. So far, fellow Republicans are all but ignoring the troubles. (Eric Gay, File/Associated Press)

AUSTIN, Texas — Public corruption investigators in Texas confirmed Wednesday they are looking into the state’s agriculture chief after allegations arose that he used taxpayer funds to obtain a so-called “Jesus shot” in Oklahoma, an injection marketed as curing pain for life.

Texas Department of Public Safety Tom Vinger said Miller is under investigation “regarding abuse of official capacity” but did not provide details about the scope.

The investigation comes a month after the Houston Chronicle revealed that Miller used taxpayer money to travel to Oklahoma last year to apparently receive the “Jesus shot” — an anti-inflammatory injection that is supposed to reduce chronic pain.

Miller is a rodeo calf-roper who last year unapologetically shared a Facebook post that suggested using a nuclear bomb on the Muslim population. He reimbursed the state more than $1,000 after being confronted by the newspaper’s findings but has declined to say whether he got the injection during the trip.

A spokesman for Miller criticized a liberal advocacy group, Progress Texas, which filed a formal complaint against Miller in wake of the newspaper report.

“Just because Progress Texas wants to score political points by sensationalizing a complaint that was filed by them doesn’t make it a criminal matter and doesn’t mean that the Texas Rangers have found any wrongdoing,” Miller spokesman Todd Smith said.

The “Jesus shot” reportedly costs $300 and is available only through Dr. John Michael Lonergan, who lost his medical license in Ohio after being convicted of felony health care and mail fraud and tax evasion.

Lyle Kelsey, executive director of the Oklahoma medical board, said Wednesday that state officials have previously raised questions about the Jesus shot and its effectiveness. But he said Lonergan has faced no disciplinary action and continues to have a valid medical license.

“We certainly wish he hadn’t chosen the term he chose to name it,” Kelsey said. “But that in itself isn’t illegal, it’s just embarrassing.”

Republicans have controlled every statewide office in Texas for two decades, and in 2014, Miller and Paxton cruised into office as part of a GOP ticket headlined by Gov. Greg Abbott and Land Commissioner George P. Bush, son of Jeb Bush.

The current Texas Democratic Party is so weak that it didn’t even run an opponent against Miller, who hired shock rocker Ted Nugent as his campaign treasurer and made repealing a ban on deep fryers in public schools one of his first official acts.

“All the facts point to breaking the law,” Progress Texas spokeswoman Lucy Stein said. “As a steward of the people’s money, Sid Miller must be held accountable for abusing his office.”

Earlier this week, the U.S. Securities and Exchange Commission filed accusations of investor fraud against Paxton, who has already pleaded not guilty to criminal charges of duping investors in a tech startup. He has said he won’t resign.

Other top Republican leaders, including Abbott, have consistently refused to comment on the troubles of their fellow state officials.