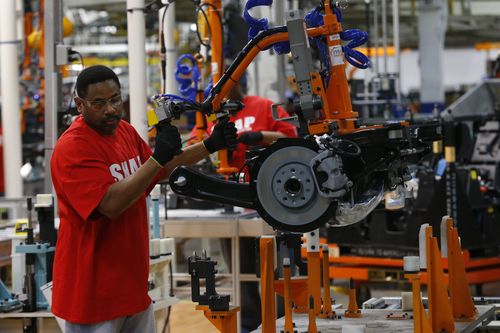 After months of speculation, Fiat Chrysler CEO Sergio Marchionne confirmed today that the automaker plans to move production of its Ram pickups from Warren to Sterling Heights and will move production of a Jeep SUV from Belvidere, Ill., to Toluca, Mexico.

Those moves and others discussed by Marcionne today are part of a massive plan to shift production of smaller vehicles to Mexico while concentrating on the production of more profitable Jeep SUVs and Ram pickups in the U.S.

Despite some painful temporary layoffs, a multibillion reinvestment plan, the discontinuation of two passenger cars and the movement of a Jeep SUV to Mexico, Marchionne said no U.S. jobs would be lost.

"We have had obviously intense dialogue with our counterparts at the UAW about the implications on head count," Marchionne said. "I confirm now, as we have done with them, that the realignment of the footprint in NAFTA is actually going to yield an increase in manpower."

While most of the plans confirmed by Marchionne today have previously been reported by the Free Press and other media organizations, they had not been confirmed by the company, leading to anxiety among thousands of workers at the automaker's U.S. plants.

Marchionne said today that the overriding principle that guided the massive transformation of FCA's production footprint was to avoid the loss of the ability to make any Ram or Jeep vehicle as the company made a transition to a new or redesigned model.

"I will give you a perfect example. The Warren Truck Plant, which is historically one of the oldest plants we have in the fold of the old Chrysler and now FCA, is a plant that would have had to go through incredible surgery in order for it to accept the new Ram truck," Marchionne said. “So the realignment of the Sterling Heights plant to accept the new Ram ...allowed us to effectively re-lay out the whole manufacturing footprint by not losing one unit."

Now, that plant is scheduled to begin building Ram pickups by 2018.

Marchionne also said today that the automaker will build the replacement for the Jeep Compass and Jeep Patriot at its plant in Toluca, Mexico, with production scheduled to begin during the second half of this year.

FCA has said those two Jeep SUVs will be replaced with a single model but has not revealed the name of the vehicle. The automaker is also preparing to begin production of the Jeep Compass/Patriot replacement at its plant in Pernambuco, Brazil, as it seeks to boost Jeep sales in South America.

Currently, the Compass and Patriot are built in Belvidere, Ill. Marchionne did not discuss the future of that plant. The Free Press has previously reported that the Jeep Cherokee, currently made in Toledo, will be moved to Belvidere.

That will give the automaker the ability to boost production capacity of the Jeep Wrangler and build a Jeep pickup truck in Toledo so it can meet demand for the Wrangler in the U.S. and export a higher volume.

In 2012, when FCA discontinued production of the Jeep Liberty, it lost almost a year of production volume and profits as it retooled the plant to make the new Jeep Cherokee.

At the time, Marchionne vowed he would never make that mistake again – an idea that resurfaced when he talked about the company's planning process today.