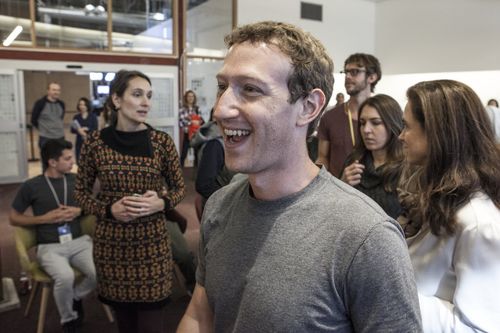 SAN FRANCISCO — Wall Street is running out of superlatives for Facebook.

"Ace Book." "Moving beyond the friend zone." Those were two of the research notes published by slack-jawed analysts following Wednesday's Street-beating quarterly results that solidified its position as one of the world's most powerful and top-performing technology companies.

Facebook far exceeded expectations for nearly every metric, even as other tech companies disappointed, sending shares soaring 11% to an all-time high of $120.79 and giving the company a $30 billion bump to its market cap.

Facebook is now the sixth most valuable company by market cap in the S&P 500, overtaking Johnson & Johnson.

Fueling the positive sentiment: Facebook's winning streak in mobile advertising and the rise of video advertising. Facebook has been showing its 1.65 billion users videos that play automatically and it has introduced more advertising on photo-sharing service Instagram.

First-quarter results illustrated the traction Facebook is gaining with advertisers.

Facebook is expected to account for about 12% of the $186.81 billion global digital advertising market in 2016, according to research firm eMarketer.

"We expect Facebook to continue its rapid growth overseas, and expect it to successfully monetize its under-penetrated Instagram, WhatsApp and Messenger assets over the coming years. Investments in new initiatives position the company for long term growth, and we believe that these initiatives will drive growth over the next decade," he wrote in a research note. "In summary, Facebook is a great company, period."