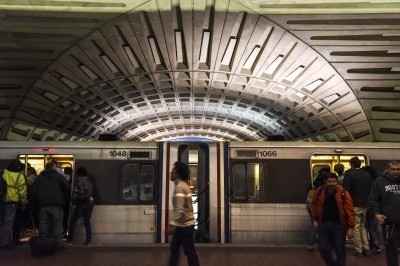 Metro passengers moved through the Metro Center station on March 30, 2016. Metro General Manager Paul J. Wiedefeld on Friday will announce his plan for overhauling the aging system. It likely will involve shutting down entire rail lines for weeks at a time for maintenance and repairs.
After weeks of speculation, Metro’s General Manager Paul J. Wiedefeld is set Friday to unveil his plan for a massive overhaul of Metro’s rail system — one that is expected to upend the commutes of hundreds of thousands of Washington-area residents.Wiedefeld will make the announcement at a mid-morning news conference at the agency’s downtown headquarters after he has briefed Metro board members.

Agency officials have remained tight-lipped about the plan, but in a memo this week to members of the region’s congressional delegation, Wiedefeld hinted that there will be major disruptions that will require not only patience from riders, but cooperation from local governments and employers.

The plan is expected to impact all of the system’s lines, including weeks-long shutdowns of parts of lines, long-term single tracking and station closings.

“The region will need to come together to provide traffic mitigation and alternative travel options to help reduce the impact on customers and businesses,” Wiedefeld wrote. “The business community has already offered support to identify major employers that will be impacted.”

He said Metro’s current service levels simply do not give crews enough time to complete the tremendous amount of work needed to restore the system.

[Metro sank into crisis despite years of warnings]

“The hard truth is that 33 hours a week is not enough to dig out of the deferred maintenance hole, and at this rate, we will not reach an acceptable state of safety and reliability for several years,” Wiedefeld said in the memo to the delegation.

Wiedefeld’s plan will be the most ambitious effort ever to repair the aging system which has suffered from years of neglect and inattention and a lack of a reliable funding stream.

His announcement comes the same week that the National Transportation Safety Board released its report into the cause of the fatal 2015 smoke incident, which killed one train rider and sickened more than 90 others. Congress also said this week that it will hold its second oversight hearing in less than two months the state of the Metro system.

[NTSB: Year after year, Metro had failed to learn from its mistakes]

The NTSB investigation into the fatal Yellow Line incident and more examinations of at least a half-dozen other incidents that followed have painted a picture of an agency in turmoil — one that for years prioritized service over safety, failed to heed repeated warnings that it was putting its passengers and workers at risk and is now paying the price.

Wiedefeld, who joined the agency in November, has been tasked with turning the 40-year-old system’s slide.

In just a few months on the job, the former airport chief and transportation executive has shown a willingness to take unpopular steps even if it means angering riders and the officials who help fund his system.

In January, he shut down the entire system — bus, rail and MetroAccess — in anticipation of a massive snow storm that blanketed the region.

And then in March, following an electrical fire that bore eerie similarities to the deadly smoke calamity that killed Carol Glover, 61, he took the unprecedented step of shutting down the entire system for an entire day. The goal was to give crews time to conduct emergency inspections and repairs. Wiedefeld was criticized for not giving the public more notice, but he said that he couldn’t risk another death.

[After subway shutdown will drastic action be Metro’s new norm?]

Other systems have or are considering similar actions to repair damaged and aging infrastructure. New York’s Metropolitan Transit Agency is contemplating a plan that would shutter a subway tunnel between Manhattan and Brooklyn that runs under the East River, according to the New York Times. The L train tunnel was damaged by Hurricane Sandy and officials concluded that they would be unable to make repairs during nights and weekends because of the complexity of the work.

The Chicago Transit Authority spent a year developing a plan to handle service before it shut down a portion of its subway system for five months in 2013. As part of that plan, it hired more than 400 new bus drivers, added shuttles and new routes to areas affected by the closure. It also spent months educating riders about the shift. The closure affected nine stations.

Metro riders and regional officials won’t have a year to prepare but Wiedefeld has pledged to be as transparent as possible about the anticipated impacts.