It’s easy to go directly to asking what about the cars? Well, it looks like not much will change on that front immediately.

While most Americans know Mitsubishi as a small, struggling automaker with an aging lineup, things are quite different in Japan and Asia as a whole. Mitsubishi is still quite popular in Japan, and while it has lesser market share than some of the other automakers, three-diamond kei cars (like the eK Wagon, which I used to drive) and superminis (like the Colt, which even includes a RalliArt version) are everywhere.

I also see JDM Outlanders and other Mitsubishi SUVs pretty regularly, and they’re always newer models. Nissan also sells re-badged Mitsubishi microcars, which is part of how the fuel economy cheating scandal came to light. That will certainly continue. And as Nissan CEO Carlos Ghosn said today, the Mitsubishi brand is not just going to disappear.

One aspect of the Asian business this is unlikely to affect is Mitsubishi’s plans for 30,000 Mirage subcompacts at a factory in the Philippines it purchased from Ford in 2014, which Jalopnik East previously covered. Mitsubishi was hoping to take advantage of tax incentives, but it will need to produce 200,000 vehicles over a period of six years starting this year. Given that Mitsubishi has seen a healthy share of the 2015 30% jump in auto sales in the PH, it’s hard to imagine Nissan going back on the deal.

And this isn’t even acknowledging Mitsubishi’s strong sale numbers of the Triton in Southeast Asia, especially Thailand, or even its somewhat decent numbers in Australia. There are places, in some segments, where the Mitsubishi brand still has tremendous staying power.

What we really need to talk about is the cultural aspects of Mitsubishi’s dirty, rotten cheating, because those matter and they let us into some of the rather darker aspects of Japanese collectivist sociocultural processes.

The most immediate fallout of the Mitsubishi scandal is, as is always the case with these sorts of things, a stiffly formal ritual apology played to the press, which serves a sort of a play-acting role more than it addresses problems. This time the Oscar for Best Ritual Sorry went to Mitsubishi’s Aikawa Tetsuro.

And let’s be frank, this is just the latest in a series of corporate scandals not just for the automotive companies, but also within the Japanese corporate world more generally. Corporate malfeasance has been a problem in Japan for an extremely long time, only getting real attention both within and without Japan after the Great Tohoku Earthquake in March of 2011 lead to the well-reported issues at the TEPCO Fukushima nuclear power plant.

Prime Minister Abe Shinzo swept into his second non-consecutive term as the head of the Japanese government with promises to tackle corporate governance, as The Economist has reported from multiple angles:

Government bigwigs, including Mr Abe himself, now offer meetings to foreign activist investors. A new governance code, which came into force this week, seeks to break open the cosy world of the Japanese boardroom by requiring firms to appoint at least two outside directors.

Unfortunately, this is pretty good evidence that whatever the Abe Administration is attempting to do, it isn’t working. Given that Mitsubishi’s cheating was just that—intentional deception—and after Nissan exposed the three-diamond automaker’s underhandedness, it swooped in to take a nice sized chunk in its jaws.

Is it an angel investor? Something like that. Japanese companies aren’t exactly known for the kind of predatory investing that this controlling stake would no-doubt engender in the West.

But that doesn’t mean that the embarrassment won’t lead to shame all around as those organizations or individuals associated with Mitsubishi Motors in any capacity seek to avoid being painted with its miscreant brush. 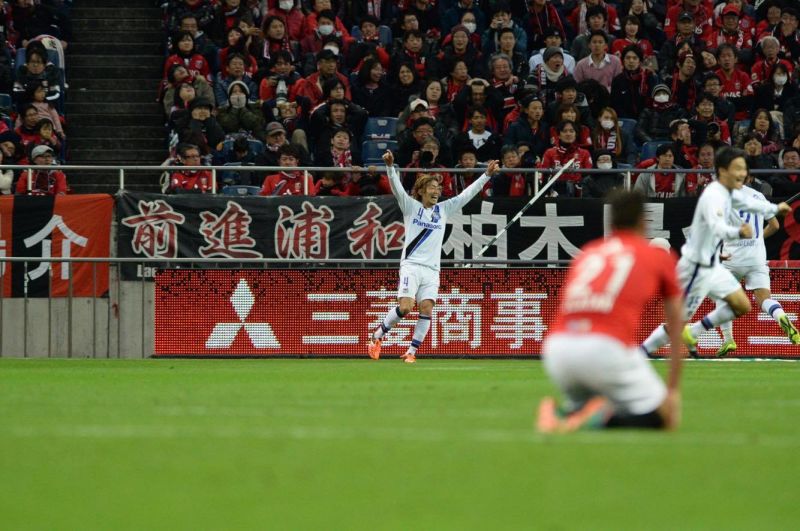 Here’s one example, and it comes from the world of soccer. Take the J1 League soccer team, the Urawa Red Diamonds, aka the Reds. (based in my own Saitama).

You might guess from their name that they’re funded by Mitsubishi Motors. This is actually one of the fiduciary ways that the scandal will affect something seemingly completely unrelated to cars. You see, the ownership decisions around the Urawa Reds and the Yokohama F. Marinos is intricately linked to the financial situations and positions of both Nissan and Mitsubishi.

Mitsubishi Motors owns half or so of the Reds, and Nissan has almost three fourths of a rival team, the Yokohama F. Marinos. And, as Japanese soccer expert Dan Orlowitz of Football Channel told Jalopnik, this is a big honking no-no along the lines of an antitrust issue, citing J-League Article 25, Clause 5 stating “that a company with a controlling stake in one club cannot have a direct or indirect controlling stake in another club.” How this will be cleared up remains to be seen.

To understand how this happens, you have to understand just how truly conglomerated and... I hate to even use this term... incestuous Japanese securities holdings (that’s stocks, like the stock market) are.

You might know something like “Mitsubishi makes other stuff, like fighter jets and pencils and TVs.” What you might not know is that Mitsubishi itself is actually a name applied to several different companies that sort of are the same company sort of not, and those companies own parts of other companies (like KFC restaurants in Japan and Kirin Ichiban beer.)

Look, like your Facebook relationship status in high school, it’s complicated. Which means this is probably only the beginning of corporate restructuring across Mitsubishi and Nissan’s holdings in every industrial sector you can imagine.

And that is why Nissan taking a controlling stake in Mitsubishi Motors is... well... big in Japan.