Toyota and Honda were ranked as the most cooperative automakers by an annual survey of about 500 suppliers.

General Motors made significant improvement in building trust, but auto suppliers again cited Toyota and Honda as the most supplier-friendly automakers, according to an annual survey on relations between manufacturers and suppliers.

The study, scheduled to be released today by Planning Perspectives, a Birmingham firm that has focused on the industry's supplier relations for more than 16 years, was based on surveys from 647 sales personnel from 492 suppliers.

It is regarded as a barometer for competitive collaboration for new technology and a mutual recognition of automakers' and suppliers' need to survive financially.

The six largest automakers in the U.S. — General Motors, Ford, Toyota, Fiat Chrysler, Honda and Nissan — are ranked on a variety of measurements that are folded into a Working Relations Index that runs between 100 and 500. Here are their scores for this year's study with last year's scores in parentheses. 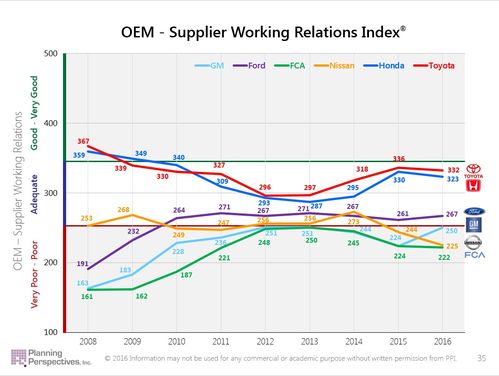 Planning Perspectives is an annual study that asks auto suppliers which automakers are best to work with.

Why does it matter? Aren't purchasing executives trying to get the best components at the lowest possible price?

Yes, but they also need to establish trust and communication with auto suppliers so they can all work toward a better product.

“There are lots of companies in many industries that are working hard to build the best supplier relations they can, because when things get tough, they want to be the customer of choice," said John Henke, CEO of Planning Perspectives and author of the study, now in its 16th year.

To simplify, the automaker that is willing to pay a few more pennies per fastener or sensor may have a higher initial cost, but may later get access first to a new technology from that same supplier.

Or the supplier may be more willing to suggest a way to integrate multiple parts in a way that saves money.

Instead of haggling over the price of a widget, there are long-term benefits when the automaker treats a supplier as a partner rather than as an adversary.

"Automakers will have to invest heavily in new resources and training programs to improve their working relationships with suppliers because suppliers have a significant impact on an automaker's profits," Henke said. "Currently, this investment isn't happening."

Henke said this year's survey sorted the six major manufacturers into three groups: "Toyota and Honda remain on top. Nissan and FCA were worse than everyone else, then Ford and GM are below Honda and Toyota, but significantly better than Nissan and FCA," he said.

Both Ford and GM were given modestly higher marks on the question of: "Is the vice president of purchasing working to build more trusting supplier relations?"

Ford purchasing chief Birgit Behrendt received a score of 2.77 on a scale of 2 to 5, up from 2.61 last year. Steve Kiefer, GM vice president of global purchasing and supply chain, was given 3.01, up from 2.80 last year.

"We are committed to strengthening our collaboration with our partners to deliver mutually beneficial, innovative solutions to our customers," said Bob Young, senior vice president for purchasing with Toyota Motor Engineering & Manufacturing of North America.

The premise of Henke's research is that the better relationships enable both automaker and supplier to bring the best technology to market sooner.

GM's Kiefer said his group has changed some of its metrics to get beyond per-unit cost and establish greater trust.

"The messaging we’ve been trying to send to suppliers is, we want the relationship to reflect consistently high quality," Kiefer said. "We want cost to be the result of bringing suppliers into the design process as early as possible."

Beyond traditional suppliers of steel, aluminum, interior features and engine controls, automakers are learning to work with younger companies that develop the sensing and nanotechnology required for the evolution of autonomous vehicles.

Some of these companies are new to the auto industry.

“It takes a very different relationship to enter into contracts with these kinds of companies," Kiefer said. “But what’s really exciting is how fast these new technologies are moving."

Toyota and Honda were found to be the most cooperative automakers by suppliers in the annual Planning Perspectives survey.