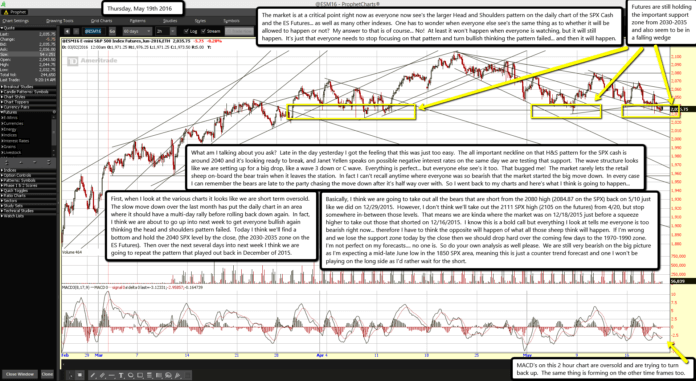 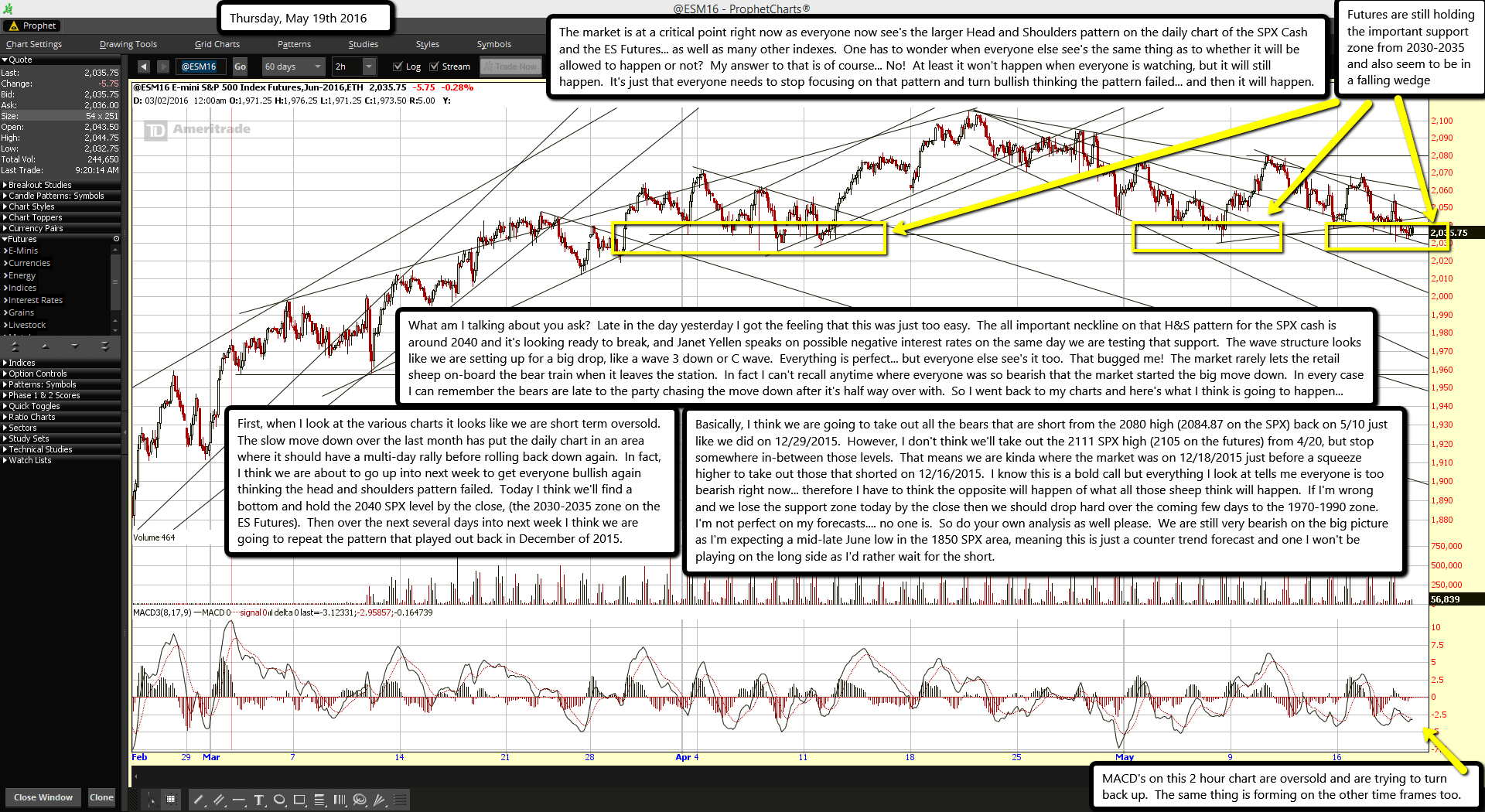 MACD's on this 2 hour chart are oversold and are trying to turn back up.  The same thing is forming on the other time frames too.

The market is at a critical point right now as everyone now see's the larger Head and Shoulders pattern on the daily chart of the SPX Cash and the ES Futures... as well as many other indexes.  One has to wonder when everyone else see's the same thing as to whether it will be allowed to happen or not?  My answer to that is of course... No!  At least it won't happen when everyone is watching, but it will still happen.  It's just that everyone needs to stop focusing on that pattern and turn bullish thinking the pattern failed... and then it will happen.

What am I talking about you ask?  Late in the day yesterday I got the feeling that this was just too easy.  The all important neckline on that H&S pattern for the SPX cash is around 2040 and it's looking ready to break, and Janet Yellen speaks on possible negative interest rates on the same day we are testing that support.  The wave structure looks like we are setting up for a big drop, like a wave 3 down or C wave.  Everything is perfect... but everyone else see's it too.  That bugged me!  The market rarely lets the retail sheep on-board the bear train when it leaves the station.  In fact I can't recall anytime where everyone was so bearish that the market started the big move down.  In every case I can remember the bears are late to the party chasing the move down after it's half way over with.  So I went back to my charts and here's what I think is going to happen...

First, when I look at the various charts it looks like we are short term oversold.  The slow move down over the last month has put the daily chart in an area where it should have a multi-day rally before rolling back down again.  In fact, I think we are about to go up into next week to get everyone bullish again thinking the head and shoulders pattern failed.  Today I think we'll find a bottom and hold the 2040 SPX level by the close, (the 2030-2035 zone on the ES Futures).  Then over the next several days into next week I think we are going to repeat the pattern that played out back in December of 2015.

Basically, I think we are going to take out all the bears that are short from the 2080 high (2084.87 on the SPX) back on 5/10 just like we did on 12/29/2015.  However, I don't think we'll take out the 2111 SPX high (2105 on the futures) from 4/20, but stop somewhere in-between those levels.  That means we are kinda where the market was on 12/18/2015 just before a squeeze higher to take out those that shorted on 12/16/2015.  I know this is a bold call but everything I look at tells me everyone is too bearish right now... therefore I have to think the opposite will happen of what all those sheep think will happen.  If I'm wrong and we lose the support zone today by the close then we should drop hard over the coming few days to the 1970-1990 zone.  I'm not perfect on my forecasts.... no one is.  So do your own analysis as well please.  We are still very bearish on the big picture as I'm expecting a mid-late June low in the 1850 SPX area, meaning this is just a counter trend forecast and one I won't be playing on the long side as I'd rather wait for the short. 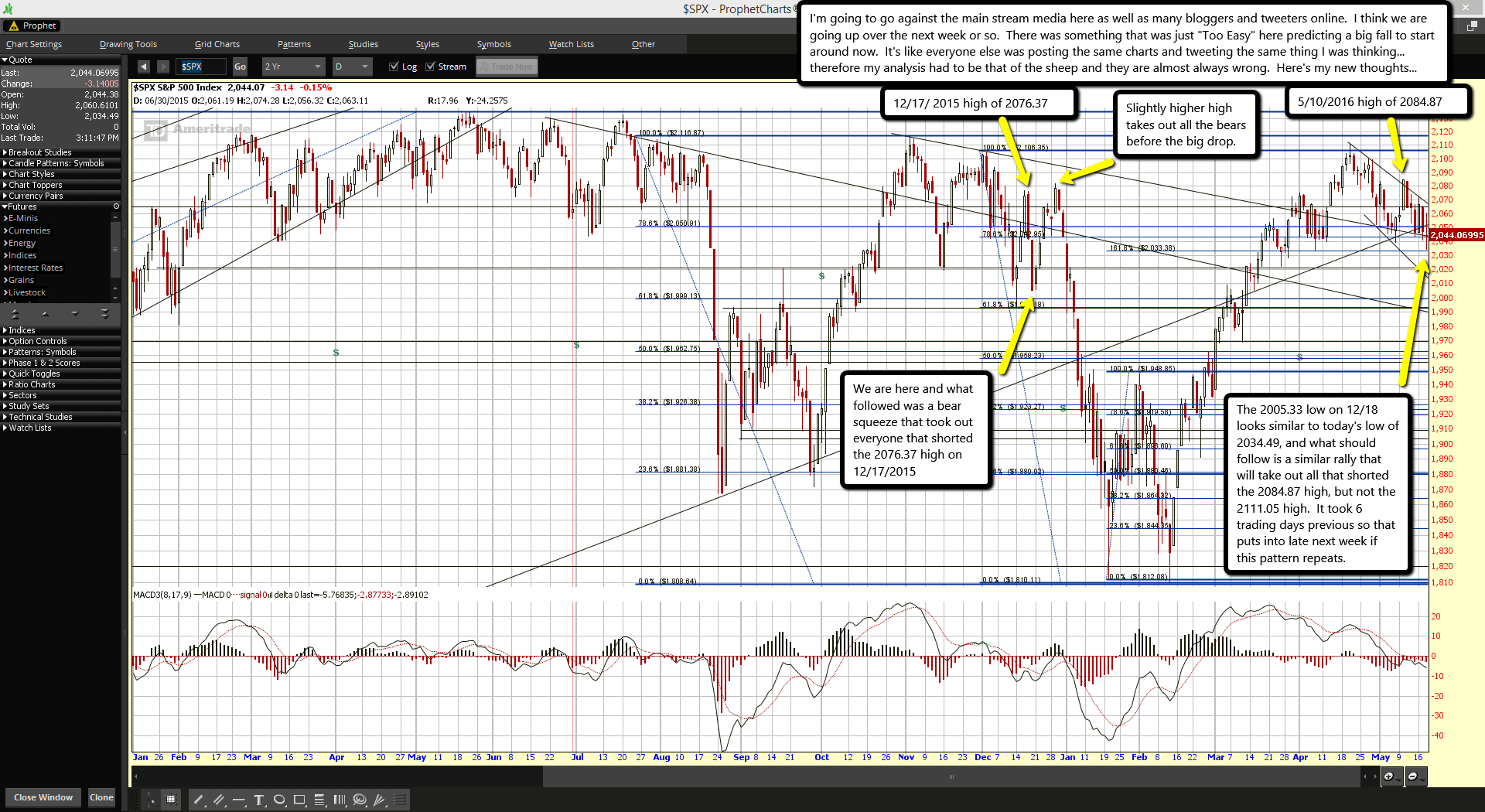