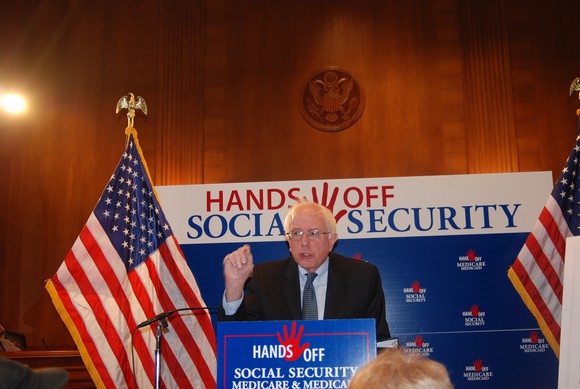 However, he feels there is still a lot of work to be done and that Social Security is more important now than ever, since more than one-third of seniors are practically 100% dependent on their Social Security benefits. In Sanders' mind, no retiree should be living in poverty and Social Security should be expanded for all retirees. He also believes cost-of-living adjustments should be more reflective of the actual inflation rate experienced by seniors.

The current state of Social Security

As I've written before, Social Security is unsustainable in its current form, but it's far from "broke" or "in crisis," as many in the media would have you believe. In fact, between the money in the Social Security trust fund and the payroll taxes coming in, Social Security can pay every cent it's promised to current and future retirees until 2034, and three-fourths of those benefits afterwards, according to the Social Security Trustees' report.

Having said that, it's what happens after 2034 and in the meantime that's the concern. Only being able to pay three-fourths of benefits after that date means that Social Security isn't completely sustainable in its current form, so changes will need to be made to preserve retirees' benefits. There are only two main ways to fix it – benefit reductions or tax increases.

Not only does Sanders want to preserve benefits; he wants to expand Social Security for most retirees. In 2015, Sanders introduced a bill known as The Social Security Expansion Act, which would make the following changes:

According to the legislation, not only would these increases be enough to fund the proposed expansion, but it would also extend the solvency of Social Security for the next 45 years (50 years, according to Sanders' campaign website).

What it could mean to you

Unless you're in the upper income brackets, Sanders' plan wouldn't result in higher Social Security taxes for you and your family.

Lower-income workers would experience the biggest change. As of 2015, the minimum Social Security benefit for a worker with 30 or more "years of coverage" is $829.80 per month ($9,957.60 per year). The federal poverty level for individuals is currently $11,880, and since one of the primary objectives of Sanders' plan is to dramatically reduce the number of seniors living in poverty, it's likely that the new minimum benefit would make up the difference.

The $15,834 Social Security bonus most retirees completely overlook
If you're like most Americans, you're a few years (or more) behind on your retirement savings. But a handful of little-known "Social Security secrets" could help ensure a boost in your retirement income. For example: one easy trick could pay you as much as $15,834 more... each year! Once you learn how to maximize your Social Security benefits, we think you could retire confidently with the peace of mind we're all after. Simply click here to discover how to learn more about these strategies.